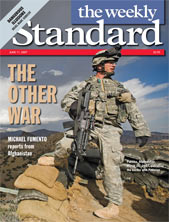 As I relate in my piece "The Other War" in the new issue of The Weekly Standard, wherever I was in Afghanistan I heard the same refrain: "This war is winnable." Implicit is that it's also losable; but what they really mean is winnable in comparison to Iraq. It's strange but true that Afghanistan -- with four major ethnic groups, two official languages, and almost countless lesser languages -- is far more of a proud, united nation than Iraq. Despite increasing calls for negotiating with the Taliban, who cannot be negotiated with, we've actually done an admirable job of killing them and keeping them from taking hold of any part of Afghanistan. But as I saw and as statistics bear out, progress is threatened by our fighting the war on a shoestring in terms of both men and material. We're especially making a grave mistake in not ensuring that the Afghan army and police - who really fight and who really are loyal to the government - are paid. Part of this is Washington's fault, but much of the fault goes to NATO where few countries pull their weight economically and merely six of 37 member nations actually allow their men to fight. I'm proud to have spent much of my time with personnel from one of those exceptions, Romania.