Pres. Obama this week must decide whether to order the building of more F-22 Raptor fighters or let the production lines close. Yet as I write in Defense News, only 203 of the aircraft described by the think tank Air Power Australia as "the most capable multi-role combat aircraft in production today" have been built or ordered. That from the original request for 762. 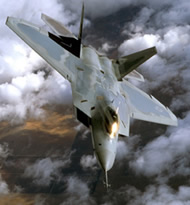 The F-22 Raptor performs as impressively as it looks.

Why the hack job? Because we always plan the next war by the last or current one. F-22s are overkill for insurgents. But what folly to think we can simply abandon conventional fighting capabilities.

The F-22 Raptor performs as impressively as it looks.

The Russians, Chinese, and many other nations already have many different fighters that fly circles around the 33-year-old F-15 Eagle that Raptor detractors insist we keep flying for decades more. Dogfighting aside, the latest Russian missile defense system - which will be exported everywhere including Iran - can even down ballistic missiles. The F-22 is the only fighter we have or will have, including the forthcoming F-35 Lightning II, that can effectively penetrate the Russian system. We need vastly more Raptors. Shut down the production lines and watch the U.S. become a second-rate air power.