"A cocktail of three flu viruses are reported to have mutated into a single pneumonic plague, which it is believed may be far more dangerous than swine flu," reports London's Daily Express. "The death toll has reached 189 and more than 1 million people have been infected, most of them in the nine regions of Western Ukraine." 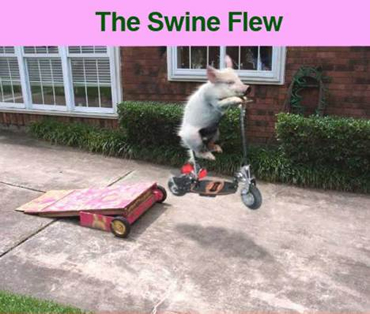 According to the paper, President of Ukraine Viktor Yushchenko said: "People are dying. The epidemic is killing doctors. This is absolutely inconceivable in the 21st Century."

That's right! Heretofore, taking the Hippocratic oath immunized you against the flu. Or at least in the 21st Century. Not any longer!

As to that death toll, it may possibly be above that of swine flu but it's well below that of good ol' garden-variety seasonal flu. And no, there's no such things as a cocktail of three viruses. How do I know? Trust me, I know. Among other things the president reportedly refers to one of the viruses as "the California flu."

No such animal. Er, virus.