It’s Veterans Day in America, yet there are progressively fewer to venerate. Most of the World War II generation is gone and even the older Vietnam vets are reaching average life expectancy. Relatively few Americans have served in Iraq or Afghanistan, and most of them never saw battle. Yet even as explaining combat to a civilian is like describing the sky to somebody blind from birth, we “brave few,” as Shakespeare famously put it in Henry V, feel compelled to try anyway.

Ask a veteran what combat is like and you’ll get as many different answers as there are vets. Still, the clichés hold true: “All your senses are heightened;” “It’s a mixture of fear and excitement;” “It’s the most alive you’ll ever feel;” and yes, Winston Churchill’s famous declaration that “nothing in life is so exhilarating as to be shot at without result.” After being the proverbial ducks in a shooting gallery in one particularly vicious ambush in Iraq, the men I was with and I began laughing hysterically upon reaching safety.

But there seem to be some universal feelings too. You do come away a different person. You do see life differently. Things that once seemed terribly important, and remain so to others, now strike you as insipid. I remember seeing people lined up at an Apple Store to be among the first to buy the last I-whatever and I wanted to yell at them “Why don’t you line up to get a life!” (And forget about enjoying amusement park rides.)

But there was one feeling that I couldn’t begin to describe until I heard it from a Vietnam vet in Dave Grossman’s book On Killing. It bowled me over. “This is going to sound really strange,” the vet said,

…but there’s a love relationship that is nurtured in combat because the man next you — you’re depending on him for the most important thing you have, your life, and if he lets you down you’re either maimed or killed. If you make a mistake the same thing happens to him, so the bond of trust has to be extremely close; and I’d say this bond is stronger than almost anything, with the exception of parent and child. It’s a hell of a lot stronger than man and wife — your life is in his hands, you trust that person with the most valuable thing you have.

And what happens when that person dies, whether in your presence or later on? You may end up believing in ghosts, like the ghost of Michael Monsoor.

In the spring of 2006 I was an embedded journalist in Iraq’s most violent city, Ramadi. It was the headquarters of al-Qaida in Iraq, local graffiti boasted it was “the graveyard of the Americans” and the Washington Post would later declare the entire province “lost.”

Leaving your base camp back then virtually guaranteed a fight, and I got one the first day. Shots rang out at the 45 minute mark — always at the 45-minute mark. Camera in hand, I darted out from my protected position into the street. A glance over my shoulder presented the sobering sight of a tall Navy SEAL seemingly pointing his 7.62 millimeter medium MK48 machine gun right at me. His was the first combat photo I ever took, his weapon in ready position with another SEAL directly behind him holding a carbine as if it were a pistol.

In fact, he was protecting me as well as his teammates. SEALs don’t wear identification — even on dress uniforms — and I would never have learned his name if, six months later, he hadn’t sacrificed all to save those same teammates.

How strange it would feel when I saw them again. We would exchange our dusty battle uniforms for my blue suit and their black dress uniforms, and the locale wouldn’t be a war-torn neighborhood on the other side of the world, but rather the White House. President Bush was presenting the parents of Navy Petty Officer 2nd Class (Sea, Air, and Land) Michael Monsoor our nation’s highest award — the Medal of Honor. “Mr. and Mrs. Monsoor: America owes you a debt that can never be repaid,” he said, tears glistening on his face. “This nation will always cherish the memory of your son.”

The members of two platoons of SEAL Team 3 on that April day in Iraq had made clear their disapproval of my presence, and I understood it wasn’t a generalized hatred of the media. To them I was just sniper-bait.

I had requested and received an embed assignment in the most vicious part of the city (“The redder the better!” I cockily told the public affairs officer who placed me.) Two reporters had preceded me, but snipers sent both home feet first. One was an ignorant civilian (a wedding photographer!), but the other was a former Army paratrooper like me.

The shootings forced soldiers and SEALs to dash out to where they knew a scope was trained to drag the men to cover. During one rescue, a 101st Airborne sergeant was severely wounded. On the evening of the Medal of Honor ceremony, at an Irish pub coincidentally just three blocks from my house, one SEAL after another shook my hand and thanked me for telling the world of their heroism and sacrifice. They even called me a hero; I think not! But in Ramadi I was just another casualty waiting to happen.

After my chance meeting with Monsoor in Ramadi, it became clear we were in the midst of a full-fledged attack. The platoons split, with each grabbing a rooftop — the “high ground” in urban warfare. The bad guys never had a chance. “Those SEALs fight like machines,” I later wrote in a Weekly Standard article that Gen. Dave Petraeus called “Great stuff with a great unit in a very tough neighborhood!”

But machines don’t die, and within weeks a member of the platoon, Aviation Ordnanceman 2nd Class Marc Alan Lee, 28, became the first SEAL killed in Iraq during a fierce firefight. Unfortunately, the only photo I got of him was of his back as he bent over to reload his machine gun, but his mother, Debbie Lee, was delighted to have it.

Six months later, when I returned to Ramadi and Task Force Currahee, the city was already tamer — in part because of the actions of 1/506th, 101st Airborne and of the SEAL platoons. Yet there was terrible news: A second SEAL had just been lost.

On the morning of Sept. 29, 2006 — which I now think of as St. Michael’s Day — 25-year-old Monsoor was standing lookout at a sniper post on a rooftop outcropping between two other SEALs who were lying in the prone position. They were helping drive back an attack and had already dropped two bad guys.

Suddenly a grenade bounced off Monsoor’s body armor chest plate and fell at his feet. Monsoor knew that by then the fuse was too short to toss it back. He also knew the prone SEALs couldn’t move. He was the only one in a position to save his own life. Instead, he did the opposite. Without hesitation he smothered the blast with his own body. The other SEALs still sustained serious wounds, but Monsoor had saved their lives.

Regarding both Lee and Monsoor, upon my return to the States I wrote of the reaction I’d gotten by e-mail from their teammates. “Anyone who harbors the notion that SEALs are as tough on the inside as they are on the outside is wrong,” I said. Indeed, the losses were especially heavy blows for the nation’s toughest warriors. At the pub gathering, a SEAL confessed to me: “You know, we really had become convinced we were invincible.” Others there, one missing an eye and chunk of flesh from his arm, bore mute testimony to SEAL mortality.

The next day the teammates of “Mikey,” as they called him, would receive 11 Silver Stars — the Navy’s third-highest honor. It made them the most decorated SEAL unit since Vietnam.

The SEALs have their own ways of honoring their fallen. Three weeks after my rendezvous with him, Mikey had saved the life of yet another teammate by dragging the severely wounded man to safety with one arm while using the other arm to keep the enemy back with bursts from his powerful (but heavy) MK48. He earned a Silver Star in the field for that action.

Mikey’s aunt and godmother, Patty Monsoor O’Conner, sent me a photo she’d received of a tattoo the rescued man had imprinted on his torso. It shows Mikey with his machine gun and in full battle dress, but also wearing angel wings. Alongside it is the prayer to Saint Michael (the Archangel), which some members of the Catholic faith (Monsoor’s religion) recite in defense against the forces of darkness. As a Michael and as a paratrooper, he would be my patron saint twice over.

The prayer entreats the Archangel to “defend us in battle” and “be our protection” against wickedness. No SEAL is a saint in any sense of the word. But that part of the prayer fits. And just thinking about it still gives me chills. And just reading these words makes me tear up a bit. We veterans are allowed to do that. Like those medals, it’s something we earned. Something you can’t buy at the Apple store. 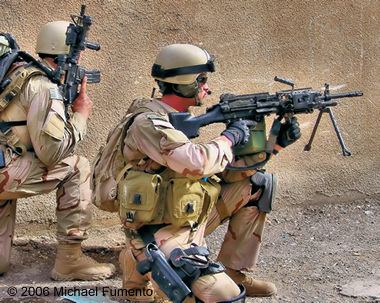 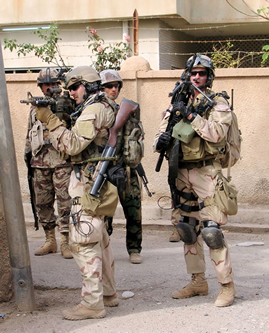