Here’s a good way to commemorate Earth Day 2000: Skip Erin Brockovich, and buy your family a good science textbook instead.

Audiences and critics are falling hard for Julia Roberts’ low-cut, high-heeled portrayal of the real-life Brockovich. She’s a foul-mouthed file clerk who took on an evil utility company that allegedly poisoned residents in the desert town of Hinkley, Calif. Brockovich scored $2 million in legal bonuses. Roberts made $20 million playing Pretty Woman meets A Civil Action. Over the past four weeks, the box-office smash grossed nearly $90 million. 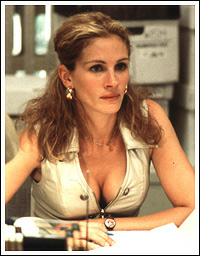 Brockovich, played by Julia Roberts, is no boob. But she’s no heroine, either.

It’s a titillating story about toxic torts, no question. But the movie and the real-life drama behind it contain about as much scientific credibility as Leo DiCaprio’s global warming crib notes.

Like many environmentalist crusaders before her, Brockovich catalogued a cornucopia of illnesses in a small town, and connected them to a single pollutant. Minute amounts of the heavy metal Chromium 6, she claimed, had caused everything from uterine and breast cancer to birth defects, nosebleeds, rashes, immune disorders and miscarriages. Under pressure from the bull-headed Brockovich and some out-of-town legal heavyweights who collaborated with Brockovich’s law firm, the accused polluter — Pacific Gas & Electric — shelled out over $300 million to settle the case.

Did the company’s cave in mean they were guilty as charged? Was science really on the plaintiffs’ side? Investigative journalist and science author Michael Fumento checked it out. As he reported in the Wall Street Journal last week, "no one agent could possibly have caused more than a handful of the symptoms described, and Chromium 6 in the water almost certainly couldn’t have caused any of them."

Fumento found that the U.S. Environmental Protection Agency’s own risk information concluded that "no data were located in the available literature that suggested that (Chromium 6) is carcinogenic by the oral route of exposure." The substance has been shown to cause cancer only through inhalation of large doses over many years. High-dose tests in rodents and dogs failed to demonstrate ill effects.

Moreover, Fumento discovered, recent research on Chromium 6 exposure at the Hinkley plant showed that "not only was there no excess of cancer when compared to the general California population, but that the overall PG&E worker death rate was significantly much lower than those of other Californians. Are we to believe that something causing no harm at the plant itself is nonetheless wreaking havoc on those living nearby?"

In response, the real Brockovich and her high-powered attorney friends point to thousands of pages of poignant testimonials from Hinkley townspeople. "These people are rightfully outraged. And the rest of us should be, too," Brockovich wrote in a letter to the Wall Street Journal." (The complete exchange, including links to Fumento’s scientific sources - Brockovich and company provided no such citations in their rebuttal — can be found at www.fumento.com.

Individual anecdotes always make good witness statements and emotional dramas. They are not, however, scientific proof. Miscarriages are common. Everyone gets rashes and nosebleeds. And just look at the hard data on birth defects: On an average day in the United States, according to data from the National Center for Health Statistics, 10,860 babies are born. Of those, 412 are born with birth defects, and 20 die as the result of a birth defect. Between 80,000 to 120,000 babies out of roughly 4 million born annually have at least one major malformation. The causes of about 60 percent of all birth defects are unknown.

The question is whether the "victims" identified by Brockovich suffered from these various ailments at higher rates than the normal population, and whether the accused pollutant could have possibly been responsible for the entire range of maladies Brockovich recorded. In the only other skeptical piece about Erin Brockovich to appear in a major mainstream newspaper, New York Timesscience reporter Gina Kolata noted this week that "federal agencies whose scientists were not involved in the litigation said evidence was lacking that chromium (VI) in groundwater caused a myriad of health problems."

In a more scientifically literate nation, movies like Erin Brockovich would be properly viewed as farce, and the junk lawsuits they glorify would be properly exposed as fraud. Alas, the cold, hard facts are no match for a warm smile, dazzling cleavage, and a blinding Hollywood spotlight.

Read the original Wall Street Journal article, "Erin Brockovich, Exposed" and longer version of the article, "The Dark Side of Erin Brockovich" (The National Post, March 29, 2000).