When the Rocky Flats plutonium-processing and repacking facility began serving the U.S. nuclear arsenal in 1953, the American public was learning about radiation through such films as The Beast from 20,000 Fathoms, Godzilla, and Attack of the Crab Monsters, in which exposure to atomic radiation caused otherwise benign organisms to grow to tremendous size and feed an humans and large cities. The problems of nuclear production and waste are still treated with the same finesse and rationality today.

Sixteen miles northwest of Denver and eight miles south of Boulder, Rocky Flats is the target of dozens of anti-nuclear groups who regularly picket the plant. Nukewatch coordinator and former Progressive editor Sam Day Jr. compares the plant to Nazi death camps. The Committee against Radiotoxic Pollution prints horrifying notices with official government logos at the top (neither ethical nor legal, by the way).

The story is big news to the local press. While working at the Rocky Mountain News, I discovered that the paper had 32 envelopes of clips on Rocky Flats; it had only 21 on abortion.

While extreme anti-nukers would object to Rocky Flats if it were as clean as Felix Unger’s kitchen, you wouldn’t expect them to pick up much support from the local population. Rocky Flats is the ninth largest employer in a state that’s just coming out of a five-year recession. It is also the only plant in the country that makes triggering devices for our nuclear arsenal.

So to "stop war," activists resort to fear-mongering. It’s easy to scare people with radiation: like a child’s monster in the closet, you can never prove it isn’t there, lurking and ready to kill. And the media, local and national, know they have a good story as long as they play along.

For example, Time declared in 1987 that "plutonium, even in tiny quantities, is searingly radioactive and ranks with botulin toxin as one of the world’s most poisonous substances." In fact, botulin toxin is more than 1,300 times as deadly as an equivalent plutonium solution.

Moreover, plutonium is primarily an alpha emitter, meaning that its radiation is absorbed within one or two inches of air, and is therefore essentially harmless unless the plutonium itself gets into the body. Plutonium emits no gamma rays, which require several feet of earth to block, or lots of distance. The main danger in working with plutonium is inhaling it in the form of dust, which can cause lung cancer some 15 to 45 years later.

The most common fear is of an accidental explosion that would disseminate large amounts of plutonium into the atmosphere. But such explosions almost never occur naturally; it takes sophisticated engineering to make an atomic bomb go off. And a spontaneous plutonium explosion at Rocky Flats would be the equivalent of an explosion of only about one and a half sticks of dynamite.

A Department of Energy Study

Overseen by a state-appointed blueribbon citizens’ committee reported in 1983 that if current safety systems were maintained, an accident sufficient to kill one or more people living within fifty miles of the plant would be expected to occur less often than once every thousand years. The worst possible accident considered in the study — a jumbo jet crashing into the main processing facility — might kill about seventy people.

The most thorough analysis of the possibility of worker death due to radiation exposure was in a Los Alamos study released in the February 1987 American Journal of Epidemiology, which found that Rocky Flats workers had a higher-than-average risk of dying from brain tumors and from several other forms of cancer, and that the probability of becoming afflicted to increase with time of exposure.

As it happens, among those forms of cancer found to occur less frequently at Rocky Flats was the one normally related to plutonium-radiation exposure: lung cancer. Bone and liver cancers were also found to be below expected levels. Further, only brain cancer was found to be statistically significantly more common than would be expected.

Moreover, the overall cancer rate at Rocky Flats was significantly lower than would be expected in a randomly selected population. As to brain cancer, the whole Denver area proves to have a higher incidence than the national average; the Rocky Flats-worker rate was no higher than the Denver rate.

What it comes down to is that the study does not rule out the possibility of worker harm from exposure to plutonium. Last month, the National Cancer Institute released a study of the area around Rocky Flats and 61 other U.S. nuclear institutions, concluding, according to a spokesman, "There was no convincing evidence of any increased risk of death from any of the cancers we surveyed due to living near nuclear facilities."

The Rocky Mountain News practically ignored the story, giving it a few paragraphs on one of the last pages of the paper. But when a judge ruled that month that a jury could conclude that a Rocky Flats worker died of cancer solely because of radiation exposure, the newspaper ran the story under a page-one banner headline. The greatest threat to those who work at or live near the plant actually seems to be non-radioactive substances.

A report released this past January found 12 Rocky Flats workers with chronic beryllium disease, a nuclear-plant version of black lung, caused by inhalation of the strong, lightweight metal used in the manufacture of nuclear weapons. No deaths have yet been reported, but the disease is incurable and proves fatal to about 30 per cent of victims. The threat to non-workers is solvents that have leaked into the groundwater.

A December 1988 DOE report found Rocky Flats’ water to be potentially the worst environmental problem in the nation’s nuclear-weapons complex, although DOE officials said it would take nearly forty years for the contamination to spread to local drinking-water supplies.

Yet last year, several communities began digging costly interception ditches to catch Rocky Flats runoff. Residents increased their buying of water filters costing up to $ 4,000 each from salesmen whose flyers were labeled "Neighborhood Alert" and warned: "Results from drinking this area’s water: 1) Leukemia/Brain Tumors/Cancer, 2) Miscarriages/Birth Defects, 3) Hundreds of other severe health risks . . ." All this despite assurances from the Colorado Department of Health that the water supply was safe. 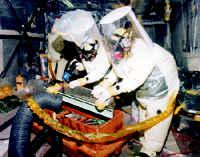 Inside Rocky Flats, tremendous caution may be called for in some areas. Outside the plant, the worst radiation problem is the fact that Denver’s thin air lets in an extra amount of ultra-violet light from the sun.

radioactive decay; an installation like Rocky Flats is necessary to maintain the nuclear strike force (or even to dismantle it safely). According to Energy Secretary James Watkins, it would be twenty years before the plant could be moved. The only real question is how to continue to ensure the safety of the Denver area during the plant’s operation.

The first step is to realize that there will always be problems in a plant run by the same people who run the Postal Service. Because of the confidential nature of the operations, some government control is necessary, but steps can be taken to mitigate the problem. Energy Department safety standards should be replaced with the OSHA and EPA rules that apply to private industry.

Further, contractors should be chosen through competitive bidding, then made liable for negligence and intentional torts, rather than protected from liability by the DOE.

Finally, the current system gives management two primary responsibilities: both for weapons production and for waste handling. But it is not humanly possible to fulfill two primary" responsibilities at the same time. Hence, the DOE should contract separately for the waste handling. It could then be the arbiter of disputes between the operations contractor and the commercial-waste contractor. This way, at the very least, the DOE would hear about problems before they become outrageous.

None of which will provide an ideal solution, but as the large missile arsenals the United States and the Soviet Union still have pointed at each other — not to mention characters like Saddam Hussein — make clear, we still live in a far from perfect world.