"Border collie jill surveying the view from atop the sand dune." Those were the last words of Malibu plastic surgeon Frank Ryan, best known for "reconstructing" reality TV star Heidi Montag . It’s not quite up there with "Et tu, Brute?" Yet it seemed important enough for him to text it just before driving off a cliff in August. Jill survived.

We don’t know what the message was in a 2007 accident involving the sender and her four fellow New York high school cheerleaders. But it probably wasn’t worth slamming head-on into a truck, killing them all. And the 2008 Chatsworth train collision, in which 25 people died and more than 100 were injured, was officially attributed to the engineer of the Metrolink commuter train being distracted by text messaging. 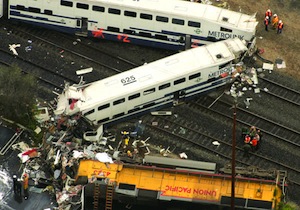 This wreck caused by an engineer who was texting took 25 lives.

Unfortunately, laws intended to deal with the problem of texting while driving, a major topic at the Transportation Department’s Distracted Driving Summit on Sept. 21, reflect vital misunderstandings about why a cellphone combined with a moving vehicle can be so deadly and how to deal with it.

Texting while driving can be more dangerous than driving while swigging Jack Daniels, according to studies. In a 2009 survey, Car and Driver magazine tested two of its staffers under a variety of conditions. It found that on average, driving at 70 mph, one man braking suddenly while legally drunk (0.08 blood alcohol content ) traveled 4 feet beyond his baseline performance. But reading an e-mail while driving sober, he traveled 36 feet beyond the baseline result and 70 feet while sending a text. In the worst case while texting, he traveled 319 feet before stopping.

Yet 66% of respondents to a 2007 Harris Interactive poll admitted they’ve texted while driving, even as 89% said it should be banned. And it’s the youngest drivers, who already are in far more than their share of road accidents and deaths, who do it most, according to government and insurance industry reports .

There are no reliable studies regarding deaths associated with driving and texting. But consider that in 2002, when texting was still a novelty, cellphone usage killed an estimated 2,600 Americans , according to a study by the Harvard Center for Risk Analysis. Yet texting and driving is 17 times more dangerous than just talking on a phone, according to a 2009 Virginia Tech study. And we sent about 15 times the number of messages in 2009 as we did in 2005, according to one wireless industry report.

One possible explanation for why we can’t seem to keep our paws off those tiny keyboards is that surveys show that a vast majority of American drivers believe themselves to be above average — and not just in Lake Wobegon. Hence the belief that we need to ban thee but not me.

Transportation Secretary Ray LaHood’s idea of putting cigarette-pack type warning labels on cellphones is as worthless as it sounds. We don’t need text education. We need legal coercion. Yet 20 states still don’t ban texting and driving, and only eight plus the District of Colombia ban talking on hand-held phones while driving. None ban hands-free phones. 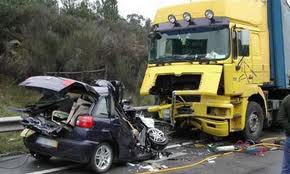 Five cheerleaders lost their lives for a text message when their SUV ran head-on into a semi. (This may or may not be the actual accident.)

However, the mere existence of laws alone is not enough. Almost twice as many Californians, according to a new Automobile Club of Southern California observational survey, say they now use cellphones while driving than admitted to doing so before it became illegal 20 months ago. And texting laws in four states surveyed have done nothing to reduce reported collisions, according to figures released by an affiliate of the Insurance Institute for Highway Safety.

Why? Penalties are a joke and enforcement is essentially nonexistent. A first offense is merely a $20 fine in California, and $50 for subsequent violations. By contrast, a first DUI conviction in the state carries a jail sentence of four days to six months, a fine as high as $1,000, a six-month license suspension and more.

Enforcement efforts are virtually nonexistent because everyone thinks it’s so difficult. Yet equipment that detects outgoing radiofrequency signals is neither new nor cost-prohibitive and no more invasive than traffic control cameras, radar or radar detector spotters. But even such low-tech "equipment" as human eyeballs can work. Results from two pilot programs released Tuesday by the Department of Transportation show that. During a yearlong test, using a combination of public service announcements and programs in which officers were specifically watching out for drivers using cellphones, hand-held cellphone use while driving dropped 56% in Hartford, Conn., and 38% in Syracuse, N.Y.; texting while driving declined 68% and 42%, respectively.

"The laws are simple to enforce," says Jennifer Smith , president of Focus Driven , patterned after the highly effective Mothers Against Drunk Driving .

Yet none of this will have any effect if we don’t recognize that the specific cause of the distraction "isn’t your hands or eyes but your head," as University of Illinois cognitive scientist Daniel Simons puts it. "Texting requires you to take your mind off the road." Indeed, hands-free phones may induce a fatally false sense of complacency "if you falsely believe that you will notice what’s on the road while focusing attention on your phone or a keyboard," Simons adds. That’s why studies repeatedly show hands-free phones to be just as dangerous as hand-helds.

But current state laws universally allow hands-free phones , except in a few places for certain categories such as teens and bus drivers. And yes, there are voice-to-text apps that allow verbal text messaging, which some promote as a safer alternative.

For now, all you can do is control your own conduct, including downloading software that automatically blocks outgoing messages while turning off alerts for incoming ones. No message is worth dying for.