But it’s the kind of hype you can expect in the wake of Geron Corp .’s ballyhooed experiment , which, while it’s unlikely to do much to advance health , could do a lot for Geron’s financial prospects. 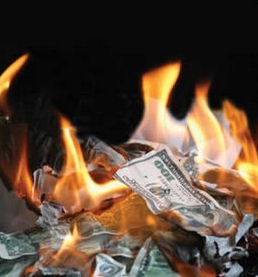 Geron was under pressure after burning money on ESC research since 1995.

On Friday, doctors injected a partially paralyzed patient with human embryo cells that Geron scientists converted to special nerve cells . The theory is that some will form a restorative coating around the damage. The company says it plans to treat nine more patients in the Phase I clinical trial . Geron shares rose 6.4 percent on heavy volume after the announcement.

So what to make of the experiment?

First, the animal research that led to the trial has been severely misrepresented, including by the late Ed Bradley on "60 Minutes," who enthralled viewers with talk of "paralyzed" rats who, after injections with ESCs, "were able to walk again."

But the rodents didn’t need wheelchairs; their injury was "moderate in severity," according to the study by Hans Keirstead and colleagues.

"I don’t understand [having] human trials because the animal studies aren’t very convincing," David Bennett , a University of Alberta neuroscientist renowned for his experimentation with spinal-cord injuries, told me. He thinks much more lab work should have been done.

There’s much more to the Geron "scam."

For example, Geron says it will only treat patients injured in the preceding two weeks. Yet that’s when injured spinal cords are spontaneously generating new cells in an effort to heal. Studies in cats with completely severed spines show that with mere treadmill exercise, as one found , all of them could walk again without assistance, though sadly their mouse-chasing days were behind them.

Alas, humans don’t heal like cats. But even if none of Geron’s patients shows any improvement in sensation or mobility, sensitive tests like electromyography or one mercifully abbreviated to SEP can detect increases in cell growth or something called plasticity.

That would give Geron a chance to claim success when there was none.

To only use patients who have just been injured "will make results really difficult to interpret," Bennett says. Which is why careful researchers use patients with old injuries, to avoid this problem. (Calls and e-mails to Geron’s representative regarding this issue were not returned.) 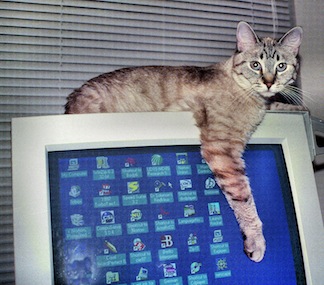 In studies, cats have routinely had severed spinal chords heal to where they could walk unassisted, though my cat prefers to lay down and "monitor" me in - more ways than one.
(Model credit: Aspen H. Cat)

So what’s Geron’s motive, if not to produce sound, useful scientific results? Among them might be to assuage stockholders regarding research into which the company’s been shoveling money since 1995. Keirstead himself has been promising human trials "in about a year"—since 2002 .

The experiment could also boost efforts to revive congressional legislation to negate a federal court’s partial ban in August on using federal funds for ESC research.

Perhaps most importantly, hype over the study provides a huge boost to an industry that’s been criticized for using promises of miracle cures for everything from Alzheimer’s to bunions to gobble up private and taxpayer dollars for decades.

But even if this experiment does show some promise, top ESC researchers admit treatments and cures using ESCs are perhaps three to five decades away .

Wayne State University biologist Jean Peduzzi-Nelson , who works with the leader in the field, neurosurgeon Carlos Lima of Lisbon, Portugal, using the careful terminology I’ve come to associate with good scientists, told me "a number of patients receiving treatment [with ACS] have gone from no movement and no sensation in their legs to some movement and some sensation." Though one did win the gold medal in the triathlon in the last Olympics.

But with all the attention, and money, going to ESC, that’s left work like Lima’s high and dry.

The Geron experiment "is like a shot in the dark," Bennett says. And "it’s sad because they’re preying on [the hopes of] these patients."