The war is winding down, with remarkably few coalition casualties. Yet soon somebody will try to start another casualty list, that of a second Gulf War Syndrome (GWS). The only way to stop it is to finally acknowledge that, in any meaningful sense, no such thing as GWS exists.

Over a decade of published scientific studies have shown that while naturally some of the 700,000 Gulf vets have died in the 12 years since the war and others have acquired various illnesses, on the whole they are at least as healthy as people their age who didn’t deploy.

Consider the mother of all GWS epidemiological studies, which appeared in the January 2000 issue of the American Journal of Epidemiology. It matched the medical records of 650,000 Gulf vets to those of 650,000 non-deployed vets of similar age and demographic backgrounds.

Researchers looked at illness ranging from cancer to heart disease to mental disorders to skin diseases for a total of 14 diseases. They further divided these by the three hospital systems involved, for a total of 42 data "slices." Statistically significant increased problems were found in five of the 42 slices. But the researchers also found significantly decreased levels of illness in 11 slices.

Smaller epidemiological studies have repeatedly come to the same conclusion, that Gulf vets as a group are a remarkably healthy bunch. Researchers have also repeatedly found that they are no more likely to have miscarried children or children with birth defects.

Yet the scare stories abound, only to be proved groundless time and again.

After a reported birth defect "cluster" in Mississippi, the state Department of Health investigated and found exactly the average number of defects. "It’s unconscionable to frighten people out of reproducing unless you have some good data to support that contention," said Dr. Russell Tarver, who headed the study. It’s "a crime against those veterans," he told me.

The VA does make presumptive disability payments to Gulf vets with Lou Gehrig’s disease (ALS) because of a study showing a slightly higher-than-expected rate of that illness among those vets. But a follow-up study found no statistically significant increased rate of the disease.

So why, despite the massive epidemiological evidence, do so many people believe GWS is real? Primarily driving the myth is the simplest of logical fallacies: If something happens after a given event, it must have been caused by that event. The vets were obviously healthy when they went to the Gulf; therefore, says the fallacy, if they’re sick now it must have been from exposure to something while there.

Yet suspect causes have been tested and retested and keep coming up negative. None of which prevents reporters and GWS activists with overactive imaginations from trying to invent new ones. Consider these headlines, all from stories authored by John Hanchette, a Pulitzer Prize winner and then a writer for Gannett News Service:

Just can’t make up our minds, can we? Sometimes a doctor claims he’s found evidence that this or that causes GWS and the media gleefully flash it around the world. But almost inevitably the research comprises a handful of vets, is published nowhere, and is never replicated. 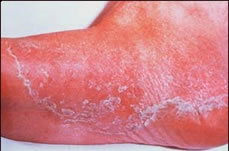 One veteran made the newspapers by blaming his athlete’s foot on GWS.

The true definition of GWS is nothing more than any disease that any Gulf vet has or thinks he has. The symptom lists stands at over 120, including: hair loss, graying hair, weight gain, weight loss, irritability, heartburn, rashes, sore throat, kidney stones, sore gums, constipation, sneezing, leg cramps and athlete’s foot.

If you haven’t suffered a dozen "GWS symptoms" over the last year, it’s bad news because it means you’re an android. One major new newsmagazine even reported the claim of a vet who said that GWS gave him genital herpes. How convenient!

"If you go out on the street in any city in this country, you’ll find people who have exactly the same things and they’ve never been to the Gulf," declared Dr. Edward Young, head of the VA Medical Center in Houston until the VA sacked him for that "insensitive" observation.

Yet true insensitivity is putting our vets in permanent fear of contracting a disease that doesn’t exist. It may be too late to remove the ingrained myth of GWS, but we can and must prevent the crime that would be the fabrication of GWS II.