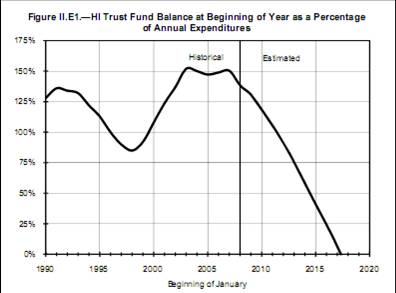 This is the chart at the foot of Medicare's bed. This problem won't be fixed with tweaks here and there.

Medicare is speeding toward insolvency , and only major fundamental changes can save it. But beware the "tweakers"—those who say that little things can add up to a lot. Usually what they’re pushing is of little benefit to Medicare, but of much benefit to them.

So we see in a new study, paid for by the American Association of Nurse Anesthetists (AANA) and seemingly applauded without dissent in the media—maybe because most of the articles are clearly rehashes of the accompanying press release.

The report in the August issue of Health Affairs says complications and deaths during surgery are equally low regardless of whether certified registered nurse anesthetists (CRNAs) or physician anesthesiologists are used. It also says there was no difference whether or not the nurse anesthesiologist was supervised by a surgeon.

Therefore we can safely drop the Medicare rule requiring either an anesthesiologist or physician supervision of a CRNA when anesthesia is administered, it concluded. And though CRNAs are among the best-paid nurses , their time is still cheaper than a doctor’s. So while Medicare currently reimburses at the same rate regardless of who’s doing the administering, we could change that and save money.

Further, while the authors don’t say so, private insurers often use Medicare payments as their standard. So there’s an implication we could end up saving money with private insurance as well!

But as the study’s own data show—sans spin—we could also lose lives.

In 2001 Congress passed legislation allowing state governors, upon meeting certain conditions, to opt out of the normal Medicare and let CRNAs fly solo. In the next four years 15 states did so. That enabled study co-authors Jerry Cromwell and Brian Dulisse of the Research Triangle Institute to use billing data to compare states that opted out and those that didn’t, as well as to make before-and-after comparisons for those that did opt out. (Cromwell didn’t respond to a request for an interview.)

The comparisons sound like a good idea, except for one 800-pound-gorilla-type problem. Billing data are just that. Everything goes on a simple one-page form , the purpose of which is to allow health care providers to get reimbursed by the feds. You wouldn’t expect the forms to contain such crucial information as to whether complications or deaths arose from surgery or anesthesia, nor the state of the patient’s health. And indeed, they do not.

"Billing data are good for generating hypotheses," says University of Pennsylvania anesthesiology professor Lee Fleisher . Then researchers can set up proper randomized controlled trials , with groups carefully matched ahead of time and information collected precisely to answer certain questions. But, he says, "Few people would ever say ’Let’s base policy on what we found in the billing data.’" 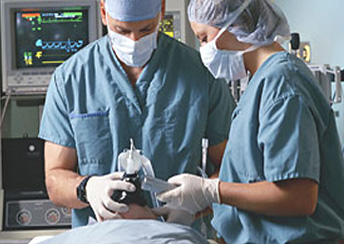 It’s nonetheless logical to assume that surgeries for which CRNAs are allowed to go solo are those considered least risky. That’s because while Cromwell and Dulisse downplay the difference between practitioners, anesthesiologists have more training than CRNAs and medical school education is incredibly demanding.

Indeed the authors admit they found that anesthesiologists were "performing more complex or difficult procedures than the nurse anesthetist solo group." (The issue of differences in the health of patients is simply ignored.) Still, they insist they were able to make a fair apples-to-apples comparison by matching "patient characteristics and procedure complexity."

Wrong. See explanation of billing data above. It’s just not enough to know the age, race, and gender of a patient. Nor are all triple bypasses or hernia operations equal. Determinations of who should administer anesthesia under what circumstances are made case-by-case. But the authors’ own data—and common sense—indicate the riskier the overall situation is perceived to be, the more likely a physician will be giving the anesthesia or at least be present.

All of which leaves a very troublesome implication. If CRNAs are handling the safest surgeries, why are they having the same level of complications and deaths? Why not fewer? Indeed, there are studies showing significantly higher death rates for surgeries lacking medical direction of an anesthesiologist.

Nurse anesthetists are skilled, reliable and absolutely necessary. Indeed they are the sole anesthesia providers in two-thirds of all rural hospitals , where physician anesthesiologists are scarce. But if the AANA wants to make the case that their role should be expanded, they’ll need to pay for a better analysis than this one.