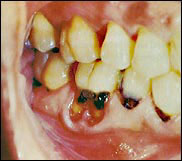 "This mouth brought to you by your friendly sugar pushers!

The American sugar industry isn’t acting very sweetly. Witness its attack on the non-caloric sweetener called sucralose, brand-named Splenda. While Big Sugar has yet to roll out its big guns advertising campaign, you can already go to a website dedicated to attacking the sweetener that opens with the image of a little girl eying a plate of chocolate chip cookies not with delight but abject terror.

All of which is rather ironic coming from the makers of a product that rots teeth, is a major contributor to the obesity epidemic, and because of its ubiquitous presence in foods makes life tough on diabetics.

Americans eat about 61 pounds of sugar and 79 pounds of corn sweeteners annually, contributing to an annual total of 142 pounds of caloric sweeteners. These sweeteners add about 700 calories to our diet each day. Since the government’s recommended energy allowance is 2,200 calories for women and 2,900 for men, added sugars comprise a third to a fourth of all the calories we consume.

Naturally, Big Sugar (henceforth "BS") has funded studies asserting sugar doesn’t contribute to our having become One Nation, Overweight. But you can believe BS, or you can believe your pocket calculator.

Yet BS says Splenda, marketed by Johnson & Johnson, is the bad guy! Among the charges on its anti-Splenda website: * It’s "fiction" that "Splenda has been thoroughly tested." Is that why FDA Consumer Magazine pointed out that Splenda was approved in 1998 only after the FDA reviewed "more than 110 animal and human safety studies conducted over 20 years?" Is that why 78 other countries have approved the product?

Regardless of whether it tastes like sugar, consumers think it tastes good. That’s why Big Sugar feels so threatened.

Ultimately, the real reason BS is so bitter about Splenda is exactly what you’d guess. In the past, non-caloric sweeteners merely stole market share from each other.

Because so many people think Splenda tastes better than other non-caloric sweeteners and can be used for baking, it’s by far the industry leader. But those attributes have also made Splenda the first low-calorie sweetener to eat into the profits of BS.

About half of Splenda’s volume growth is coming at the expense of sugar, less of which is sold each year.

Still, it’s actually high fructose corn syrup that has been clobbering sugar sales over the last few decades. But BS won’t go after HFCS so long as the HFCS industry doesn’t contest Big Sugar’s import protections. These programs, according former House Majority Leader Dick Armey, made the sugar program "the most costly cartel to American consumers since OPEC."

So instead of picking on somebody its own size, Big Sugar – ever the bully – goes after the little guy. But it won’t work. We’ve tasted the future and we like it.