(Give Me a Break: How I Exposed Hucksters, Cheats and Scam Artists and Became the Scourge of the Liberal Media by John Stossel, HarperCollins, 304 pages. $24.95) 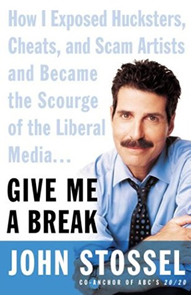 Lots of people would love to give John Stossel a break. Those who see themselves in this broad-ranging, snappy and hard-hitting book (either literally or represented) will want to break everything from the ankles up.

Stossel is the co-host of ABC's 20/20, presenter of numerous TV specials that are as controversial as they are popular and makes weekly "Give Me a Break" shorts, whence he draws the title of the book.

Once just another journalistic drone and sycophant of "consumer advocates," to paraphrase Kafka, he awoke one morning after disturbing dreams to find himself transformed into an independent thinker. He had "leap[ed] from [being] a consumer advocate" (Washington Post) to becoming a sell-out, corporate whore and "lazy and dishonest" (Ralph Nader).

Stossel is the master of "confrontational reporting," an art practiced by few journalists, drawing the line only at dishonesty and illegality in his investigations of the bad guys. (He certainly never gives them a break.)

Yet he observes most are "weirdly polite," and "blasé" while "having their career exposed as a fraud. I'd call them crooks, they'd calmly lie; I'd pull out the tape recording to prove they were liars, and they'd lie again. Usually, after the camera stopped rolling they'd thank me for the interview."

Not always. Ted Turner and others have stormed off his set, while some like then-Interior Secretary Bruce Babbitt ducked into their spider holes as soon as they saw the camera. When Stossel told a professional wrestler his job was "fake," the bully knocked him down twice.

Stossel translates his style remarkably well into print, with the same clipped prose he uses on camera. Sometimes you forget you're even reading. He also repeatedly uses snippets of conversations directly from his shows.

But it's not just entertaining wording that distinguishes "Give Me a Break" from all the liberal- and media-bashing clones crowding bookstores.

There's no screeching here, no viciousness or vindictiveness, no brainless uttering of right-wing clichés or pandering to any political party or ideology – though Stossel makes clear his own libertarian preferences. Instead, he targets anyone of any political or ideological persuasion whose deeds and palpable hypocrisy threaten the American Dream.

Then there's Erin Brockovich, "America's Sweetheart" to the media but in reality an insatiably greedy scare-mongering litigator more akin to the "The Wicked Witch of the West" sans flying monkeys.

Likewise, Stossel pursues such institutions as a bloated government that builds $300,000 outhouses, trial lawyers, "the poverty industry," scares of the week, "junk science," "the alphabet soup of agencies 'protecting us' " and a litany of others.

Stossel is also that rare breed of reporter who breaks the unwritten commandment of "Thou shalt not criticize the work of other reporters."

That he pulls punches no more than his wrestler interviewee did is evident in his criticisms of ABC colleagues (including some he still works with) and of its parent, the Walt Disney Co. (It used tax dollars to create better fireworks at Disney World.) Often, he even slams John Stossel.

"For most of my career, I had been part of the problem," he confesses. "For years I had bought [and sold] the stereotypes that serve as conventional wisdom in the news business: Corporations are evil; all risk is intolerable; consumers need more government to protect us."

Thus, the blow lands a bit softer when he makes us realize we're all part of the problem.

Give yourself a break; read and heed Stossel's insightful, delightful book.