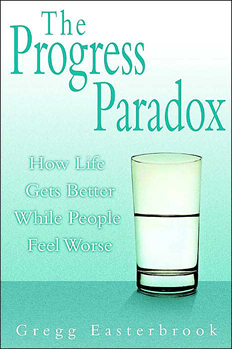 The Progress Paradox is a thought-provoking, often-brilliant book that should be on both "policy" and "self-help" shelves. It does have a bit of a flaw – namely the entire last three chapters. But more on that anon.

Gregg Easterbrook, a senior editor with The New Republic, asks: If things have improved so much over the last century, why do we seem so miserable about it?

He begins with an excellent job of showing that over the last few generations we've achieved what our parents barely dreamed of. The environment is improving in virtually every way. Illegal drug use, alcohol consumption, and tobacco use are all down. Divorce and teen abortion rates have declined. We've made remarkable progress in race relations. Food is cheaper and more plentiful than ever. Poverty rates are way down and wealth has soared. The rising tide in North America and Western Europe has raised all ships.

"Only by the 1970s did living standards, life expectancy, health care, education, and personal freedom begin to approximate today's," says Easterbrook. "And no one would choose to time-travel to the 1970s because you'd have to wear the clothes." Easterbrook then makes his case that we do feel less well off. "In 1997, 66 percent of Americans told pollsters they believe 'the lot of the average person is getting worse,'" he says. A poll from the year before (also during the economic boom) found "52 percent of respondents said the United States was worse off than when their parents were growing up, 60 percent said they expected their children to live in an even worse country, and a mere 15 percent said they felt overall national conditions were improving." Europeans feel the same, he says.

"Our forebears, who worked and sacrificed tirelessly in the hopes their descendants would someday be free, comfortable, healthy and educated, might be dismayed to observe how acidly we deny we now have these things," writes Easterbrook. He then lists (albeit not in one place, as here) many reasons for this, including:

Insofar as I've suffered most of these, I can't help but find them plausible. And surprisingly perhaps, I found the very identification of these angsts to be the most personally helpful part of the book. You'll also probably see some of yourself in this book and may even laugh at it. Self-recognization of the truth may set ye free.

There are quirks even in the good chapters, including an obsession with "Godzilla SUVs." I'm not keen on the leviathans myself, especially since I drive a two-seat matchbox car that would feel like a mere speed bump under the wheels of a 7,725-pound Ford Excursion. Still, call me old-fashioned but I prefer depictions of the Devil with a forked tail and horns rather than four tons of steel on wheels.

A deservedly repeated theme in The Progress Paradox is attacking what Dr. Seuss dubbed "THNEEDS" – Things We Think We Need." The more our wonderful economic system produces and the more we earn, the more THNEEDS we covet. Not for nothing are two of the Ten Commandments given over to coveting. It's not that coveting need lead to bad acts (after all, those are covered by other commandments regarding theft, adultery, and murder); it's the desiring itself that causes harm.

Mass-marketing tries to convince us that no item is so bizarre that you can possibly live without it. (For further information, read any Sharper Image catalogue or go to the Dogma Dog Bakery in my town.) George Will has defined a "need" culture as "a 48-hour-want." Just part of the problem with this is that "Millions are increasingly uneasy with a life based on working to exhaustion in order to make larger piles of stuff," says Easterbrook. That or they do it by continually adding to a mountain of credit card debt, creating a whole separate set of worries.

For all this, the worst aspect of THNEEDS is that they cannot satisfy needs, especially spiritual. Easterbrook doesn't shy from the spiritual. He notes that 40 years ago, just three percent of Americans called themselves "lonely," while today it's 13 percent. (It's surprising it's not higher.) He cites data that back up the clich� that money can't buy happiness, at least not far beyond the point at which the necessities are provided. He also admonishes us to "bear in mind that the rapid increase in living standards has been coincident with a decline in belief that life has meaning."

Nevertheless Easterbrook insists, "If the Western world has known a Golden Age, it is right here, right now." Yet spiritually, these are dark days indeed.

We feel a hole in our soul, and we try to fill it with purchases. Yet not only doesn't that new cell phone with a video camera, downloadable games, and Internet access not necessarily make us feel any better a week after we've purchased it; it may make us feel worse. First, there will be the letdown after the initial thrill wears off. Second, there will be the bill in the mail.

No matter how much more we earn and how cheaper things get, we keep finding ways to spend more. One of life's greatest joys is that of expectation or delayed gratification, in part because reality rarely matches our imaginations. But today, "delayed gratification" is a dirty term. If we can't afford a car, we stretch out the payments for six years or we lease. Much of the obesity epidemic is probably attributable to eating food just because it's there, rather than because we're hungry. This though we know that snacking makes us fat and that food eaten when hungry tastes much better than food eaten when handy.

So THNEEDS are both a cause and an outcome of the progress paradox. Yet there are many other intangibles that make us less happy. Civility has plummeted. One rude act can ruin your whole day; yet in the D.C. area where I live and work people practically pride themselves on rudeness. The "May I have" of my youth has been replaced with "I want; Give me; I'll take."

Unity is important for the spirit. When the Japanese launched their sneak attack over 60 years ago, the nation united for over four years. When terrorists launched a sneak attack against us three years ago, the collective sense of purpose faded in six months. Movies like Why We Fight have been replaced with Fahrenheit 9/11.

And let's not forget that deserving whipping boy, the TV. The Donna Reed show was sappy, as was the Brady Bunch over a decade later; but they tried to teach you moral lessons and didn't leave you feeling sick inside. Try saying that about the idiotic, drugged-out Osbournes. In reality, TV was never very good; but reality TV is a true horror. Hollywood has also always produced primarily junk; but God help us when Frank Capra has been replaced with Michael Moore. To some extent, material gain has contributed to the coarseness of society. It was the change from three channels on small black-and-white screens to 200 color channels on massive monitors that turned us into a stay-indoors, couch-potato culture. Air conditioning is wonderful, but before it people would spend sweaty summer nights on the front porch with the whole family talking to neighbors. How many of us today even know our neighbors?

Sadly, a "golden age" economically not only does nothing to prevent a spiritual slide but may well encourage it. Viewed thus, the progress paradox may not be a paradox at all. Now for those final three chapters, which even if you agree with them simply don't belong in this book. It's like Easterbrook had some left-over material and decided to slap it on. It's an understatement to say he comes across as preachy in these chapters, insofar as he repeatedly asserts: "This simply is not right."

Essentially he calls for nationalized healthcare and an increase in the minimum wage to $10. That might brighten the outlook for some individuals, but is no prescription for dealing with national melancholy. His brief explanation as to why it would comes up lamer than a thoroughbred with two broken ankles. Raising the minimum wage, he declaims, "would make the 'prosperous majority' happier, he says, because they "could enjoy their positions with a clearer conscience." Hmm . . . My guess is that if you asked the "prosperous majority" what would make them happier, raising the minimum wage wouldn't make a list of any length.

National health care is the rule throughout almost the entire world, yet no nation provides the quality of the U.S. system. Like socialism itself, socialized medicine creates equality by lowering everyone to a common denominator. It can actually widen differences in that the wealthy can buy private medicine in their home countries or go elsewhere. (Indeed, early in the book Easterbrook refers to "a steady flow of Canadians crossing into America to get access to superior technology and to the elective procedures that can be treated immediately under a free-enterprise system.") The poor in America do receive inferior medical care, but if anybody has a good answer to this problem it's not Easterbrook.

As for raising the minimum wage, most economists say it causes lower-paid workers more harm than good. Specifically, when forced to pay more per worker employers try to get by with fewer. Those who already have (and keep) their jobs may be a bit better off, but only at the expense of those fired or never hired. Moreover, surveys show most of the benefit of higher entry-level wages goes to families above the poverty level. Easterbrook says the only sacrifice would be that those of us with lots of money will pay a bit more for things with that extra transferred to the minimum wage earner. But he doesn't argue his case; he just preaches. So skip those last three chapters, and while you're at it skip that next trip to the mall when you have nothing to buy. Perhaps ultimately there's no cure to the progress paradox on a broad scale but it certainly can be treated one person at a time.