The global-warming bill moving through Congress would cost the nation nearly $10 trillion – while doing virtually nothing to stop warming.

The Waxman-Markey "cap and trade" bill passed the House in late June; the Senate’s due to take it up late this month. Its biggest problem (among many) is that it relies on the myth that we understand exactly what causes warming and what to do about it – that the only issue is finding the political will.

Yet a major new study published in the American Geophysical Union’s official publication, the Journal of Geophysical Research, indicates that most warming isn’t man-made. 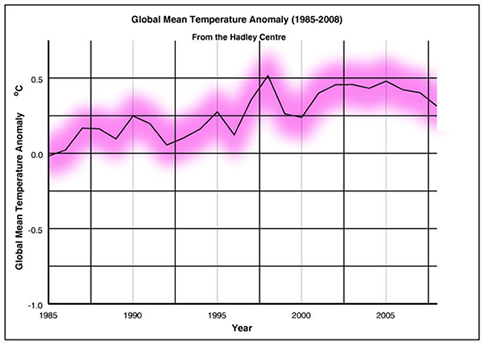 Data from the Hadley Centre of the U.K. Meteorological Service: The pink fuzz represents error boundaries. The upper boundary for 1987 corresponds to the lower one in 2008, indicating no statistically significant warming between those dates.

The party line is that manmade "greenhouse gas" emissions are clearly the greatest contributor to warming, with the major culprit being carbon dioxide from the burning of fossil fuels that heat and cool our homes and power our vehicles.

But that assumption appears false. "We have shown that internal global-climate-system variability accounts for at least 80 percent of the observed global-climate variation over the past half-century," says study co-author Christopher de Freitas.

De Freitas, a climatologist at New Zealand’s Auckland University and former editor of the prestigious international journal Climate Research, performed the study with his colleagues Robert Carter (an environmental scientist at two Australian universities) and John Mc- Lean (a climate consultant in Victoria, Australia). They found that the major cause of increased global surface temperatures since 1950 are El Niño and La Niña – the abnormal Pacific surface-water heating and cooling phenomena.

Even the remaining 20 percent of observed warming isn’t necessarily related to greenhouse-gas emissions, the researchers say. They point to other natural conditions, such as an increase in solar radiation that’s part of the sun’s normal cycle, called solar variation.

The major media ignored the study, as they do virtually all research that doesn’t fit their preconceptions. Yet it "is just one of several papers over the past six years that have shown that observed [increased] temperatures can be accounted for by natural phenomena" notes MIT meteorologist Richard Lindzen (who has been critical of both global-warming skeptics and alarmists over the years).

His own work shows that at most "about a third of the surface warming is associated with the greenhouse effect, and, quite possibly, not all of even this really small warming is due to man."

Waxman-Markey co-sponsor Rep. Ed Markey (D.-MA) warns of the need to “bring soaring temperatures from global warming back to normal.” Never mind that there’s no such thing as a “normal” climate. More pointedly, Lindzen observes, “There has been no warming since 1997 and no statistically significant warming since 1995.”

How could this happen at a time we were belching more greenhouse gases into the atmosphere than ever before?

Warming alarmists pooh-pooh this "inconvenient truth," to borrow the title of Al Gore’s Oscar-winning documentary, by disingenuously labeling it a mere "pause." By definition you can only refer to pauses in the past tense. Assuming the warming trend is just in a pause, it’s one that a study in Nature magazine last year predicted may endure another decade and perhaps even show some cooling.

Pause or no, the claim that "more greenhouse gases equals more warming" is clearly neither mathematical nor scientific – but merely ideological.

In any case, we have far cheaper ways to reduce global temperatures. For example, Energy Secretary Steven Chu recently advocated simply painting rooftops and roads a heat-reflecting white. Even the Natural Resources Defense Council calls it "a great idea." 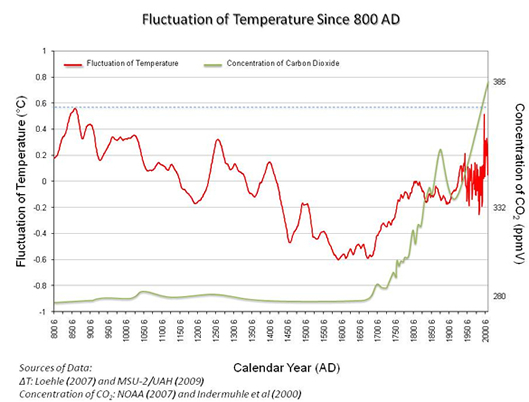 Charts as presented by global warming activists look only at the last 150 years or so. But the bigger picture sends a different message.

In contrast, the bill before Congress is neither cheap nor direct. An analysis by the conservative Heritage Foundation found it would cost the nation an average of $393 billion and over a million jobs a year from 2012 to 2035, with an ultimate price tag of $9.4 trillion. (The EPA and the Congressional Budget Office found much lower costs, though needing to use more tricks than a Las Vegas magician to do so.)

Moreover, the bill would merely launch indirect efforts to reduce temperatures by reducing greenhouse-gas emissions. To whatever extent those gases don’t directly produce more warming (as, again, they haven’t for the last 15 years), trillions of dollars go right up the smokestack.

Actually, even if greenhouse gases do cause most warming, the bill’s supporters have admitted that it would "probably have only a tiny effect on rising temperatures," as Kevin Drum, the blogger for the left-wing Mother Jones magazine, observed.

Of course, all this isn’t so important if you see other benefits from warming legislation. Such as? Well, at a British forum on July 7, Al Gore crowed that Waxman-Markey is a step toward "global governance." Woo-hoo – world government!

Too bad if you’re not sure that’s such a hot thing.