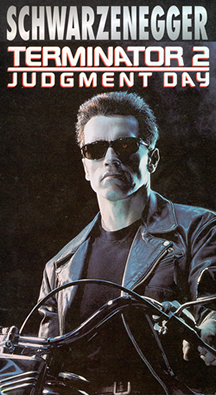 History will be a harsh judge of Arnold’s environmental policies.

Arnold, how could you? You were the GOP’s great gubernatorial hope. Sure, you had no political experience, were "squishy" on social issues, and had married into America’s foremost Democratic family. But you were going to terminate the state’s financial problems. How could you mandate a global warming program that will leave your people drowning in red ink long after you’ve said, "Hasta la vista, baby!"

Bypassing the legislature, Schwarzenegger last month signed an executive order mandating drastic cuts in so-called greenhouse gas emissions to 80% below 1990 levels by 2050. "The debate is over," Schwarzenegger wrote July 3 in a London newspaper. "We know the science."

But the Governator is thinking with his biceps, and clearly taking cues from his über-environmentalist Cabinet Secretary Terry Tamminen who seems to be living the title of Schwarzenegger’s film, True Lies.

We don’t even know for sure that any warming is man-made, rather than the earth’s natural cycle that brought on both the Medieval Warm Period and the Little Ice Age. Were it man-made, even trying to slow it would be devastatingly expensive, as Danish statistician Bjorn Lomborg and others have cogently argued.

But Schwarzenegger and Tamminen know better. "Many people have falsely assumed that you have to choose between protecting the environment and protecting the economy," he wrote in the British paper. California will show how to "to solve global warming problems," confidently declared Tamminen.

Yet signers of the Kyoto Protocol, a 1997 pact to roll back greenhouse emissions, are finding they cannot. This though Kyoto only calls for a return to 1990 levels, not California’s 80% below. Emissions from the original European Union 15 member states have INCREASED since 1997.

Schwarzenegger says he would reduce gas emissions with increased energy production from windmills, solar panels, geothermal power and biomass conversion. But all are far more expensive than the fossil fuels they replace. According to calculations by Competitive Enterprise Institute adjunct scholar Joel Schwartz, based on federal Energy Information Administration data, Arnold’s antics will cost Californians "several billion dollars per year."

That’s more than a meal for four in Beverly Hills, including drinks and tip. 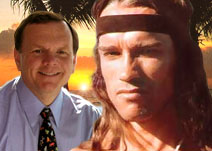 Further, says University of Virginia environmental sciences professor Patrick Michaels, "If every nation in the world lived up to Kyoto, the amount of warming prevented would be 0.13 degrees Fahrenheit in 50 years. California’s contribution works out to about 0.003 of a degree."

How did Schwarzenegger become Conan the Greenarian, determined to wield and ultimately sacrifice his state to slay a beast that’s either mythical or invincible?

Terry Tamminen is several shades greener than this big guy.

Think Tamminen. When Schwarzenegger appointed him California EPA secretary in 2003, environmentalists rejoiced. He "may hold the most powerful environmental job in the U.S. outside of Washington, D.C.," declared an interviewer. And that was BEFORE Schwarzenegger heaved him upstairs to Cabinet Secretary, where he presides over Cal/EPA and ALL the state agencies.