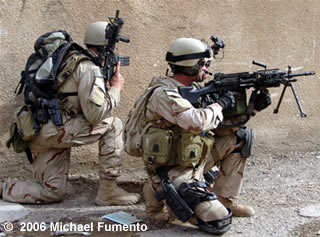 Navy SEAL Mike Monsoor under fire in Ramadi, prior to his posthumous Medal of Honor nomination. I can’t get combat photos if CPIC won’t send me to combat areas.

Most people would rather undergo several root canals than go to Iraq. Most reporters would, as well. But there are a tiny number who actually feel the need to do so – even to the extent that they’re willing to pay all their own expenses in the hope, but nothing more – of recovering part or all of those expenses through donations and selling articles about their experiences. These are the citizen embeds, and I am one of them. I was supposed go over in February, but I didn’t, and the reason I didn’t is of more than personal interest.

Originally I had planned to go to al Anbar Province for the fourth time in February. Then I decided that it was more important to cover the "surge" in Baghdad. My editors at The Weekly Standard agreed. Yes, I knew the area would be swamped with mainstream reporters – all the more reason for some citizen embeds to be there.

I asked for two embeds in the Baghdad area or one in Baghdad and one in Diyala, a hotspot on the Iranian border. These would allow the reporting I specialize in, which isn’t "war" generally but combat. I like to report on the men doing the fighting (see this and this, for example). One person said of my ”New Band of Brothers” article, it’s "Great stuff with a great unit in a very tough neighborhood!" That was General David Petraeus, now commander of coalition forces in Iraq.

The vast majority of American reporters in Iraq play it safe in Baghdad hotels, and even embeds often go no further than a major camp that’s as safe as the International Zone. But there is also a dedicated corps of citizen combat reporters in Iraq. I told Combined Press Information Corps (CPIC), which embeds reporters, that I preferred to be with the 82nd Airborne—which had only recently arrived and which is my old sister unit—but didn’t insist on it. If I’m where the action is, I’m happy.

I was first offered an embed in Tikrit and said no. Saddam’s birthplace sees about as much combat as Malibu these days, for the best of all reasons – it has been pacified. A car bomb here and there perhaps, but that’s not combat, even if reporting on car bombs is all the mainstream media wants to do. Let them. If I’m going to be somewhere as peaceful as Malibu, I’d rather be in Malibu. It has a beautiful beach, you can buy beer, and you’re not paying a fortune each day for war insurance. In response, CPIC said another embed would be found for me. Since I was in a hurry and you can’t get a good airfare without buying in advance, I went ahead and bought my plane ticket. Then I was told what that "new" destination would be – Tikrit! But, I was told, that would only be the first half of the embed. The second half would be with the 82nd at Camp Loyalty in eastern Baghdad. Nevertheless, that still didn’t solve the problem of paying war insurance for a week of twiddling my thumbs in Tikrit. Moreover, I had an excellent indication of what would happen once I got to Tikrit based on my first embed in Iraq. On that trip, in April 2005, CPIC told me I’d be embedded with a combat unit in Ramadi, but I had to go to Falluja first and embed with civil affairs. Once I got to Falluja, the Ramadi embed was simply yanked without any real explanation.

So this time I said no, I’ll just skip Tikrit and go straight to eastern Baghdad. Sure enough, I was informed a few days later that Camp Loyalty had suddenly stopped taking embeds – I would have ended up in Tikrit the entire time. I’m not saying CPIC knew this would happen; I assume they did not. All the more reason not to send me to Tikrit in the first place.

During this time I corresponded with high-ranking Public Affairs Officers who tried to make me out to be the bad guy because I didn’t want to travel eight time zones on my own dime and write about nothing. One essentially told me that a good journalist can make lemonade out of lemons. The saying, of course, is to make lemonade "When life gives you lemons," not "When we give you lemons." They might as well have said, "Hey baby, just relax and enjoy it."

Another officer said the problem was that too many reporters wanted slots. But that doesn’t explain why others would get them and I would not. I’ve proved my stuff with three previous embeds, a heap of blogs, a ton of pictures, and three cover stories in The Weekly Standard. I don’t deserve to be treated like a second-class reporter or a newbie who’s just glad to see what Iraq looks like.

True, I don’t belong to the mainstream media, and I assume that was the root problem. It’s okay for the AP to come in and claim four mosques were burned down that weren’t (the Washington Post said it was five, the New York Times said two), or that six Sunnis were horribly burned alive who weren’t, or for the Los Angeles Times to report that an airstrike that never occurred killed dozens of women and children. But when a citizen embed (albeit one attached to a magazine) wants in, he gets shuffled off to the lemon stand.

In a guerrilla war, perception is more important than reality. For example, the Tet Offensive saw the Viet Cong crushed, but the media converted it into an incredible communist victory. When CPIC caters to reporters who put headlines before facts, who want to portray the war as hopeless, and who show the military in as bad a light as possible and then proceeds to shunt aside reporters with a track record for veracity and supporting the troops, it shows utter ignorance of this truism. Somehow I don’t think this was part of Gen. Petraeus’s plan.