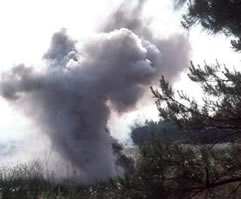 White phosphorus is excellent for marking positions or obscuring them.

Time again to try to cripple U.S. military efforts in Iraq! It’s not enough that whenever we bomb a terrorist safe house we’re accused of killing 40 civilians and no terrorists. (Why always 40?) Nor that we’re told we must turn the prisons at Abu Ghraib and Guantanamo Bay into genteel facilities fit for Martha Stewart. Now the defeat-niks are screaming about our use of white phosphorus during the bloody battle for Fallujah last year.

Capable of being packed into a huge array of munitions, WP burns on contact with air and is highly useful for smoke-screening, smoke marking, and as an anti-personnel weapon.

WP is hardly new, having been first used in the 19th Century and subsequently in both world wars, Korea, and Vietnam. Nor should it be news that it was used at Fallujah. An article in the March-April 2005 issue of Field Artillery explicitly details the use of WP during the battle.

Yet it’s being treated as a major new revelation because of an Italian documentary now available on the Internet titled "Fallujah: The Hidden Massacre." It’s as if the use of WP necessarily involves a massacre or as if there haven’t been awful massacres in recent years using nothing but machetes and clubs.

Further, there’s no proof of any wrongdoing in the video itself. Rather it relies on "explanations" exclusively from the narrator and other anti-war zealots.

This includes the infamous Giuliana Sgrena, the reporter for the Italian Communist Party newspaper Il Manifesto, allegedly seized by courteous kidnappers. In turn for her release they conveniently demanded what she had also been demanding, Italy’s withdrawal from the war. Her articles are so viciously anti-American they’d make Al Jazeera blush.

There are several accusations against our WP usage. 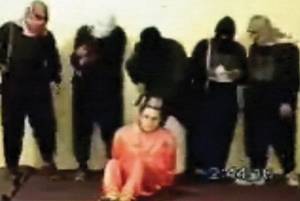 Those complaining about the use of white phosphorus smoke seem to have no complaints against the head-sawing terrorists the WP was used against.

It’s allegedly outlawed by the Geneva Convention as a chemical weapon. Therefore its use puts us in the same category as Saddam Hussein – or so claims the hugely popular leftist blogsite Daily Kos. But according to the authoritative think tank GlobalSecurity.org, "White phosphorus is not banned by any treaty to which the United States is a signatory."

Is it a chemical? Sure! So is something else you may have heard of. It’s called "gunpowder." And those chemicals used in high explosives? Yup, they’re chemicals too.

Another charge is that contact with WP can cause awful and sometimes fatal burns. But painless ways of killing and destroying such as Star Trek’s beam weapon phasers have yet to be developed. On the other hand, the vipers we cleaned out of Fallujah were days earlier sawing off civilian heads with dull knives. Sound like a pleasant way to die?

Fact is, the soldier’s weapon of choice remains high explosives. WP’s best uses aren’t against personnel at all, but to the extent it is employed this way the most practical application is flushing the enemy out of foxholes and trenches where they can then either surrender or be killed.

It’s also claimed that civilians were "targeted" with WP and the Italian video does display dead civilians. But how does this show they were the intended victims, rather than accidental casualties? It’s not like when terrorists detonate bombs in crowded marketplaces or at weddings, where the intent is rather obvious.

Regardless of the weapon, how can you possibly avoid non-combatant deaths when the enemy not only hides among civilians but hides as civilians – in total violation of the Geneva Convention, for those of you keeping track.

Further, the dead civilians in the video are wearing clothing. Both the film’s narrator and another of those defeat-nik "experts," former Marine Jeff Englehart, try to explain this away by saying WP can burn flesh while leaving clothes intact. But true weapons experts, such as GlobalSecurity.org Director John Pike, say there’s no such black magic. "If it hits your clothes it will burn your clothes," he told reporters.

As daily news reports illustrate in brilliant red Technicolor, the greatest threat to Iraqi civilians are the terrorists. If we want to save civilians, our soldiers must be free to use the best legal equipment available to kill those terrorists and to continue liberating Iraq.