As a health writer, I’ve covered cancer from all angles. What causes it and what doesn’t? How much is from man-made contaminants? What can you do to lessen your risk? Is cancer getting a fair share of the federal research budget, and what therapies will one day make this a controllable disease?

On a personal level, though, cancer has been something of a stranger. Other than my grandmother who died of it before I was born, I can’t recall a single relative even contracting the disease. I’ve lost only a few friends to it. Considering that at least a third of us will develop cancer without further medical progress, that’s remarkable. In fact, excluding the violent deaths of three Army roommates, knowing me has generally assured long life. 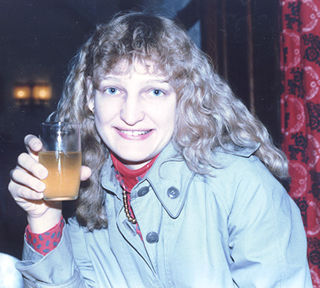 But then there was Allyson. I met her and the rest of her family almost 30 years ago. My last book was dedicated to them. About eight years ago, Allyson was diagnosed with a cancer that carries the odd name of Pseudomyxoma Peritonei.

It originates in the appendix, itself a strange thing because we don’t know what purpose it ever served. With PMP, the appendix bursts and scatters tumor cells throughout the abdominal cavity and associated organs like cluster bomblets. These then grow into a gelatinous mass. Because the proper name is both hard to pronounce and to spell the condition is often called "Jelly Belly," an apt description for both its appearance and location.

PMP is a relentless monster that falls in the shadowlands between malignant and benign. It doesn’t metastasize to other parts of the body as a malignancy would, but neither can it be entirely removed like most benign tumors. It doesn’t respond to radiation and chemotherapy appears essentially worthless.

This leaves only major surgery, called "debulking." Surgeons scrape off what they can identify and reach, but this causes scarring and eventually the thickened tissue itself can become the main threat. The patient may also go for years without further tumor growth, becoming hopeful that the stay of execution is permanent. Then the tumor virtually explodes and it’s again time to go under the knife.

Insidiously, the lower organs by their very presence contribute to the overall mass. So surgeons slowly eviscerate the patient – a couple of ovaries here, a spleen there, the uterus, the fallopian tubes, even the navel. Maybe we’ll save the intestines and stomach for the next round. By the end, Allyson had no more organs left to surrender and relied on a feeding tube in her neck that took 12 hours to nourish her.

Since PMP afflicts only 250 Americans a year, it has no lobby and no ribbon. Hence, it gets little research money. There are no miracle medicines anywhere in the pipeline for the condition. There was nothing truly useful I could dig up from the medical journals, the Internet, or my oncologist contacts. I have helped complete strangers learn about their cancers and their options; for Allyson I could do nothing.

She did not go gentle into that good night; rather she consented to one horrible surgery after another. Then she had experimental chemotherapy that left foot-long blood clots in her veins. Just days before she died she had yet another surgery so she could stay on the medicine.

Allyson endured this continual agony not out of fear of death but for her kids, the youngest of whom is only 7. No amount of pain and no new trip to the OR would stop this woman from letting them have a mom just a bit longer. And that’s why Allyson was not a victim, but a hero.

I feel guilty knowing I could find nothing to help her. But worse is knowing that as I so grieve, it is so much harder for her wonderfully close family and extended family. Leaving behind a devoted husband and four lovely children, Allyson Karson Gries departed this life at age 43.