Some global warming skeptics have been using the remarkably cold winter and record snowfalls to attack the idea of global warming. Believers are crying foul. "You’re confusing weather with climate!" they insist.

And they’re right. But they invented the game a long time ago and have been deftly playing it ever since.

Among the complainers is Washington Post columnist Eugene Robinson, who last year won the Pulitzer Prize for commentary. "The Earth is really, really big," he condescendingly but correctly observes in a nationally syndicated column. "It’s so big that it can be cold here and warm elsewhere—and this is the key concept—at the same time. Even if it were unusually cold throughout the continental U.S., that still represents less than 2% of the Earth’s surface."

Says Robinson: "Those who want to use our harsh winter to ’disprove’ the theory that the planet’s atmosphere is warming should realize that anecdotal evidence always cuts both ways." He notes that crews had to bring snow to the ski runs at the Winter Olympics in Vancouver because the winter there has been unusually warm. Meanwhile, "Revelers participating in Rio de Janeiro’s annual carnival," he says, "sweltered in atypical heat, with temperatures above 100 degrees."

Adds Robinson, "Fortunately, the custom during carnival is not to wear much in the way of clothing." To which I add, "And unfortunately I have yet to attend this event, but there’s always next year."

Everything Robinson writes is true, but he neglects to say that the warmists never hesitate to use any unusual phenomena to assert their case. "Any?" you ask with incredulity. "Any!" I respond with assurance. Including all sorts you might expect to read in the satire newspaper The Onion. 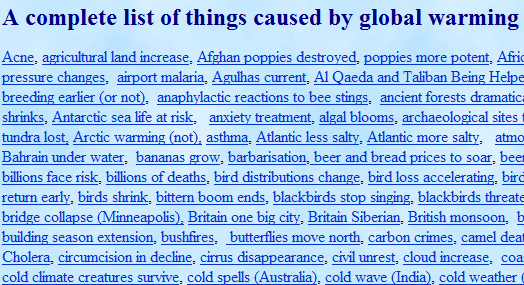 A tiny excerpt from the list of problems global warming causes.

Indeed, it was precisely to include things like extreme cold and heavy snow under the rubric of "global warming" that the preferred term became "global climate change."

A huge list of phenomena warmists have attributed to "global climate change" can be found at this Web site. One glance blows you away. It includes everything from "acne" to "yellow fever," with "short-nosed dogs endangered" in between.

And you probably never even knew weather had "a mind," which shows how little you understand global warm ... er, uh, global climate change. Four years ago, the warmists built a whole trend toward a hurricane-shredded world, entirely based on two weather aberrations. They were called Katrina and Rita.

"The hurricane that struck Louisiana yesterday was nicknamed Katrina by the National Weather Service. Its real name was global warming," wrote environmental activist Ross Gelbspan in a New York Times op-ed that one commentator aptly described as "almost giddy." The green group Friends of the Earth linked Katrina to global warming, as did Germany’s Green Party environment minister. 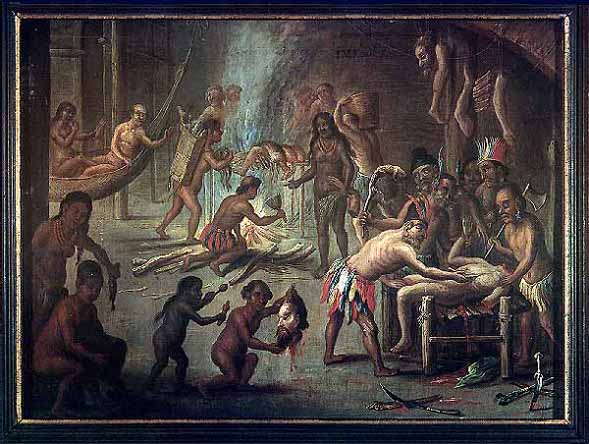 Yes, as you’ve always suspected, global warming does cause cannibalism!

But hurricane seasons since then have been exceptionally mild, as I wrote in these pages in December, with last year the mildest in three decades. This notwithstanding that the jacket of Al Gore’s latest book, Our Choice: A Plan to Solve the Climate Crisis, features a satellite image of the globe showing four major hurricanes—all photoshopped.

Extreme cold and blizzards have long been exploited by warmists. Thirteen years ago the cover of the Jan. 22 Newsweek read, "Blizzards, floods & hurricanes: Blame global warming." The New York Times carried a front-page article headlined "Blame global warming for the blizzard," and a nationally syndicated article by environmentalist Jessica Matthews ran under titles such as "Brrr, global warming brings our blizzard."

And they continue. Robinson neglected to say that just five days earlier his own newspaper ran a column by uber-environmentalist Bill McKibben titled "Washington’s Snowstorms, Brought to You by Global Warming."

Time magazine also argues "climate change could in fact make such massive snowstorms more common, even as the world continues to warm." Same with ABC, various newspapers and, well, the point is made.

So here’s to you, Mr. Robinson. But remember that what goes ’round, comes ’round. Now don’t go outside without your coat. But remember, too, hypocrisy is a mantle never worn well.