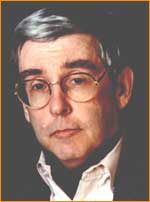 If Hanchette looks arrogant, he’s earned it. He’s a Jack Kelley who got away with it.

The forced resignation of foreign correspondent Jack Kelley from USA Today for fabricating information is a step in the right direction for a newspaper with a reputation for being long on circulation and short on credibility. Certainly it beats the paper’s reaction to my own investigation, five years ago, of a scandal concerning a reporter who was vital to the development of the myth of Gulf War Syndrome (GWS). That reporter was John Hanchette.

Hanchette worked for the Gannett News Service; Gannett owns USA Today, and everything he wrote for the news service ended up in the newspaper’s pages. Jack Kelley was a Pulitzer Prize finalist, but Hanchette actually won the award, in 1980. Both alone and with his colleague Norm Brewer, Hanchette wrote more than a hundred articles on GWS – more than any other reporter.

When I first wrote about Hanchette’s GWS involvement, I had no idea that he had also been a central figure in fomenting one of the nation’s most damaging environmental mass hysterias, that of the Love Canal. As I documented in my 1993 book, [Science Under Siege](../books/michaelfumentoandscienceundersiege), nobody at Love Canal complained of any exceptional illnesses until an environmentalist reporter for the local paper, the Niagara Falls Gazette, began a series of articles telling people that they were sitting on a horrific toxic waste site. Lo and behold, from then on every illness in the town was blamed on the ghastly ingredients brewing beneath the surface of the town. The story even made national news when one family’s dog, Pugsley, began ["inexplicably" vomiting](./bestsellingauthormichaelfumentoreportsfalse_alarms).

The editor of the newspaper at that time was – you guessed it – John Hanchette.

As the Buffalo News later related in a puff piece on Hanchette, "While there, he noticed a number of letters from readers complaining that their dogs and cats were getting sick. ’I sent a reporter out to investigate,’ Hanchette said. ’I drove out there and I saw all these signs in the neighborhood, "Deaf Children at Play." I just had this feeling something wasn’t right.’" As the Buffalo paper correctly stated, "That was the genesis of the story of Niagara Falls’ Love Canal, one of this country’s most infamous hazardous waste sites."

Once Hanchette’s reporter Michael Brown got the ball rolling, the national media descended on the town like the biblical plague of locusts and relayed to the outside world every sneeze, cough, pimple, ache, and pain experienced by any Love Canal resident. Clearly, they concluded, these symptoms could only be caused by toxic waste, which included the dreaded dioxin.

The U.S. Environmental Protection Agency and the governor of New York swaggered around the town, condemning the company that had assumed responsibility for the toxic waste and had in fact fought vehemently against allowing houses to be built on the site. The authorities promised to make everything better, no matter the cost. Ultimately, tens of millions of dollars were spent evacuating the residents.

Only later did the truth begin to seep out. Study after study conducted by the federal government and the State of New York Department of Health found that Love Canal residents experienced no more illness than would be expected in any other area of similar size. Believe it or not, dogs that don’t live on top of toxic waste dumps also vomit.

A New York Times editorial predicted the outcome correctly in 1981, when it said, "it may well turn out that the public suffered less from the chemicals there than from the hysteria generated by flimsy research irresponsibly handled." Indeed, it was the Love Canal incident that directly led to the massively expensive and often abused federal Superfund Act.

Fast-forward to the mid-1990s, when Hanchette was writing for Gannett. Between his reputation and the sheer volume of his stories, he had a tremendous impact on the public perception of alleged GWS. His slant is evident in such titles as, "Active-Duty Soldiers Tear into Pentagon Over Gulf Syndrome"; "Are Gulf Veterans Getting Needed Treatment?"; "Several Gulf Units Plagued by Unusually High Illness Rate"; "White House Panel: Pentagon Can’t Be Trusted in Persian Gulf War Syndrome Probe"; "Persian Gulf Illnesses – the Lingering War"; "Gulf War Parents with Birth Defect Children: All They Want Are Answers."

At least Hanchette kept an open mind regarding the cause of this alleged syndrome, alternatively blaming nerve gas, "experimental drugs," flies, vaccines, Aflatoxin mold, depleted uranium, and even Scud missile fuel. But Hanchette went too far even by his own standards when he began to rely on the attention-starved Gulf War veteran Pfc. Brian Martin, whose tall tales enchanted the media. Everything Martin said, they simply regurgitated – including his regurgitation story.

Any reporter who interviewed Martin, including me, was regaled with symptoms that were astounding both in sheer numbers and description. Among these were frequent bouts of vomiting something he said resembled Chemlite. That’s the liquid in those little tubes that glow brightly when snapped.

It didn’t bother Hanchette that Martin claimed his vomit glowed like this, nor that he claimed to be hospitalized five days a week for ten straight months.

Thanks to all this free publicity, Martin testified before Congress in September 1996, stating that after returning from the Gulf, "during PT [physical training] I would vomit Chemlite-looking fluids every time I ran; an ambulance would pick me up, putting IVs in both arms, rushing me to Womack Community Hospital. This happened every morning after my return from the war." In two conversations with me, Martin said that "every morning" meant from March 11 to December 31, 1991. Thus he was insistently claiming that his superiors had heartlessly demanded that he do physical training for ten full months even though they knew that he would end up hospitalized every time.

As irresponsible as it was for reporters to repeat such openly absurd claims, Hanchette went a step further. In his coverage of Martin’s testimony, Hanchette cut Martin’s encyclopedic symptom list to just nine, with no mention of the Chemlite allegation, which made Martin’s story at least somewhat plausible. Worst of all, Hanchette wrote that Martin’s claims were supported by "federal medical exams."

I called Martin’s doctors (with numbers he provided), and although Department of Veterans Affairs rules prohibited them from discussing specific patients, I avoided this by asking if any of their patients had symptoms Martin claimed. Often, the answer was no; sometimes it was laughter. When questioned about some of the illnesses Hanchette had claimed were confirmed by Martin’s medical records – such as lupus – Martin’s doctors said that they had not observed them in any of their patients.

What exams, then, could Hanchette possibly have been referring to? I politely called him four times to ask about this aspect of his story. No reply. I called twice more to say that I had evidence that he had seriously violated journalist ethics and I wanted to give him a chance to respond. Still no reply. So I called Hanchette’s editor at Gannett, Jeffrey Stinson. In defending his reporter, Stinson noted twice that Hanchette was a Pulitzer winner, called my questions "a crock," and said that he wouldn’t comment further without seeing the relevant material. So I faxed over Martin’s testimony, Hanchette’s write-up, and a list of questions.

Stinson’s response, in our next conversation: "Our stuff is good; it’s accurate. You’re full of it, pal. Bye."

Only later, after I published a 1997 expose in the Wall Street Journal and a more detailed one in Reason magazine, did Stinson finally respond. In a letter to the Journal, he insisted, "Mr. Martin showed Gannett News Service his federal medical records." Stinson was no longer just ignoring Hanchette’s false claims, he was party to them.

The result? Stinson is still with Gannett. Hanchette retired in December 2001 and is now a journalism professor. Though he continues to turn out
occasional hysterical pieces such as suggesting that SARS was the next Black Death and had been invented in a lab.

I was placed on USA Today’s "Do not print or quote" blacklist, something I suspected was true when they killed a piece of mine literally at the last minute. This was later confirmed by an acquaintance who became an editor there. It would be almost seven years before my name would appear in the paper, in February 2004.

But curiously, although he had written more than a hundred articles on GWS before his exposure, Hanchette wrote only ten in the four years after. Sheer coincidence, no doubt.