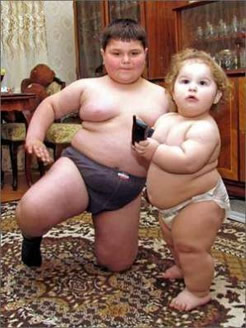 This just in! New study shows little kids watch lots of TV! Yeah, I know you’re ”Shocked, shocked!” What may surprise you, though, is the extent to which these children are being exposed to television and why. Kids aren’t just gravitating to the tube; the one-eyed monster is being used as a babysitter by parents who think they’re too busy for them and by folks who see giving a child his own tube as a way of allowing them to gorge on TV themselves.

According to the latest Media Family report conducted by the Henry J. Kaiser Family Foundation:

This is so sad, because TV makes kids fatter and dumber.

TV has been recognized as a serious contributor to childhood obesity at least since William Dietz and Steven Gortmaker asked the question in a landmark 1985 article: "Do We Fatten Our Children at the Television Set?" Countless subsequent surveys have found a cause-and-effect relationship between more TV and more body fat. In 1993 Gortmaker and Dietz ”estimated almost a third of childhood obesity could be erased if TV viewing were reduced to an hour or less a week.”

A study published in January in the International Journal of Obesity by New Zealand researchers found that the amount of TV children watch is more connected to being overweight than either nutritional intake or physical activity. 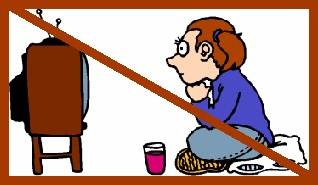 So all TV and no play makes Jack a fat boy. What about the ”dumber” aspect?

Some of those kids are watching Sesame Street and other educational shows. But in the ratings game, Big Bird is getting the rotisserie treatment from SpongeBob SquarePants. Only a fourth of parents surveyed even claim their children watch mostly educational shows. A University of Washington, Seattle study published last year compared the amounts of TV watched before the age of three with performance on three nationally recognized reading tests at ages six and seven. It found that ”each hour of average daily television viewing before age 3 years was associated with deleterious effects.”

Yet of those parents in the Kaiser poll who answered that TV mostly helps or hurts their children’s learning, most had deluded themselves into believing it helped. Some might actually be as busy as they claim, but one of the main reasons adult Americans seem time-pressed these days is that they’re spending so much time themselves watching the tube. About 60% of American adults watch two or more hours of TV daily — and yes, it makes them fatter too.

It’s the ultimate cop-out for parents to give kids their own tube just so they can be lounge lizards.

For those parents truly overwhelmed with work, there is a nice compromise. It’s called educational videotapes and DVDs. Since these can be readily obtained from the public library and in any case studies show kids love repetition (so you can keep using the material until its due back), this is far more reasonable than might otherwise seem.

But please, never forget that there never will be any substitute for your children that’s better than you.