It’s a Stephen King novel come to life — Toyotas are smashing into walls and doctors’ offices and taking Prius owners on wild rides at 94 mph, even with the driver "standing on the brakes."

Except these tales tell us more about us — the American media and the American public — than they do about the cars.

Yes, Toyota has at least one problem in some models. Four people tragically died when their car’s accelerator got stuck in a floor mat. There may prove to be other problems, too.

But the tall tales don’t add up. In a Forbes.com piece , I exposed that Prius horror story: Almost everything driver James Sikes claimed was absurd, contradictory and perhaps physically impossible. 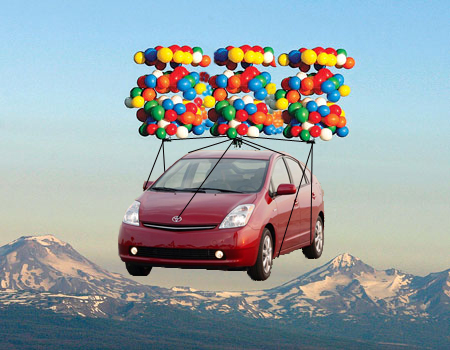 It was the "Balloon Boy in a Toyota." And, as with the original Balloon Boy, the media ate it up, because it was a great story. (The joke in newsrooms is that such a story is "too good to check.")

And the mass reports of sudden-acceleration incidents just don’t add up. Measured by reports to the National Highway Safety Administration, these same Toyotas were actually safe just a few months ago. And overseas they still are. Why have they suddenly gone nuts? Or have they?

For most of 2009, the NHTSA got about one Toyota sudden-acceleration complaint a day. Then the automaker issued its September warning to customers that floor mats could trap accelerators — and complaints suddenly jumped.

In November, Toyota announced a recall to fix sticky accelerators — and complaints jumped again. And in February, federal regulators announced they were widening their probe to examine Toyota electronics — whereupon complaints shot into outer space at more than 150 a day.

Clearly, the biggest cause of Toyota sudden-acceleration complaints is media coverage.

"No other country in the world has comparable problems with cars accelerating on their own," observes one of Germany’s top magazines, Der Spiegel — yet "the same cars exist around the world, but no accidents of this type have occurred anywhere outside of North America. There were also cases of stuck Toyota gas pedals in Germany. The drivers braked successfully, and notified their car dealerships. None of them met their deaths."

Indeed, sudden acceleration appears to be a form of American hypochondria — not just on Toyotas.

The NHTSA gets a constant stream of "speed control" complaints regarding every model of car. A recent New York Times analysis found almost 13,000 over the last decade (of which 10,000 didn’t involve Toyotas).

But why would people submit false sudden-acceleration reports?

For one thing, the complaints may serve emotional needs. People who cause accidents — especially serious ones — understandably want to blame something other than themselves. Sudden unintended acceleration does the trick.

One driver serving time for killing three people with his 1996 Camry made national news last week when he suddenly "realized" the problem was due to sudden acceleration. Yet expert witnesses on both sides of the trial testified there was nothing wrong with his car.

Some complaints represent greed: Class-action suits against Toyota are springing up like mushrooms after a rainstorm. Current or former Toyota owners can claim a sudden-acceleration incident and join in!

Finally, perhaps some credit goes to Stephen King himself, with two bestsellers about monster cars and a short story that became a movie about murderous trucks.

Of course, only a small minority of Americans embrace the "sudden acceleration" excuse — remember, those 13,000 complaints come from over 190 million licensed drivers.

But it’s a minority the media have played for all they’re worth. After all, Runaway Toyotas, especially those that act as if demon-possessed, are a lot more interesting than well-behaved ones.