"On the very day was making a high-profile defense of its cars, one of them was speeding out of control," said News—and a vast number of other media outlets worldwide. The driver of a 2008 Prius, James Sikes, called 911 to say his accelerator was stuck, he was zooming faster than 90 miles per hour and absolutely couldn’t slow down.

It got far more dramatic, though. The California Highway Patrol responded and "To get the runaway car to stop, they actually had to put their patrol car in front of the Prius and step on the brakes." During over 20 harrowing minutes, according to NBC’s report, Sikes "did everything he could to try to slow down that Prius." Others said, "Radio traffic indicated the driver was unable to turn off the engine or shift the car into neutral."

In fact, almost none of this was true. Virtually every aspect of Sikes’s story as told to reporters makes no sense. His claim that he’d tried to yank up the accelerator could be falsified, with his help, in half a minute. And now we even have an explanation for why he’d pull such a stunt, beyond the all-American desire to have 15 minutes of fame (recall the "Balloon Boy Hoax" from October) and the aching need to be perceived as a victim.

The lack of skepticism from the beginning was stunning. I combed through haystacks of articles without producing such needles as the words "alleges" or "claims." When Sikes said he brought his car to a dealer two weeks earlier, recall notice in hand, and they just turned him away, the media bought that, too. In Sikes We Trust. Then the pundits deluged us with a tsunami of an anti-Toyota sanctimony .

Well, the patrol car didn’t slow down the Prius; the bumpers never touched. The officers used a loudspeaker to tell Sikes to use the brakes and emergency brake together. He did; the car slowed to about 55 mph. Sikes turned off the engine and coasted to a halt. He stopped the car on his own.

There wasn’t anything wrong with the transmission or the Prius engine button either.

Over a 23-minute period the 911 dispatcher repeatedly pleaded with Sikes to shift into neutral. He simply refused and then essentially stopped talking to her except to say that he thought he could smell his brakes burning. 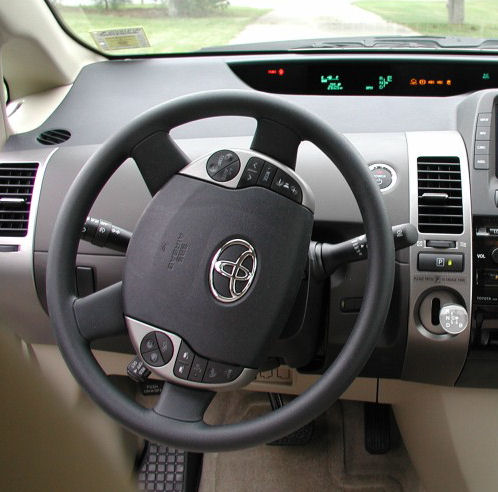 The 2008 Prius has its gear box mounted expressly to allow the shift to be flicked while keeping both hands on the wheel. There’s not an easier shifter made.

"I thought about" shifting into neutral, Sikes said at a televised press conference the day after the incident. But "I had never played with this kind of a transmission, especially when you’re driving and I was actually afraid to do that." Sikes, who has driven the car for two years, also said "I figured if I knocked it over [the gear knob] the car might flip."

He told CNN, "I was afraid to try to [reach] over there and put it in neutral. I was holding onto the steering wheel with both hands—94 miles an hour in a Toyota Prius is fast." Yet for much of the ride he had a phone in one hand. And this is especially interesting: Most gear shifts are on the console, requiring the hand to drop to shift. But, as this image shows, in the 2008 Prius it’s located on the dash within inches of the steering wheel precisely to allow shifting without the hand leaving the wheel. I sat in one and did it easily. Another unique feature of the shift is that it’s amazingly simple, with only forward, reverse, neutral and "B." The express purpose of "B" is to slow the car while preserving the brakes, as in a steep descent. Sikes actually could have shifted into two different gears.

Moreover, why would Sikes describe shifting gears as somehow "playing with the transmission." And apparently he’s never shifted while the vehicle was moving and thought somehow a gear shift could flip his car.

The dispatcher also pleaded with him repeatedly to hit the ignition button. Again, he says he was simply afraid to.

Early in the press conference he said it was because "There was too much traffic to just shut the car off. You know, turn off the vehicle and get hit in the rear." But that’s always true when you slow down; just make sure nobody’s right behind you. Later he switched gears, pun not intended, saying he was afraid the steering wheel and wheels would lock up.

Then there are the brakes.

Sikes said his brakes had just been checked out a few weeks earlier, but during the incident he "was laying on the brakes. It was not slowing down."

Others have made similar claims, so Car & Driver magazine recently put them to the test. They found a V-6 Camry at full throttle could be stopped at 435 feet. But to really test the claim, they used a powerful 540-horsepower supercharged Roush Stage 3 Mustang. It took 903 feet, but stop it did. By comparison the Prius can only muster 110 anemic ponies. Further, as Newton’s Second Law reminds us, weight is inherently a factor in slowing a moving object. The Prius weighs about two-thirds of what the Roush does.

But while these other cars were brought to full stop, Sikes says he couldn’t even reduce his speed. A video on the Web also demonstrates a 2008 Prius easily slowed to a stop with the accelerator fully depressed.

An assisting officer said he saw Sikes apply the brakes and smelled them. But of course that was only when he drew close to the vehicle. The officer doesn’t know what Sikes was doing before he arrived on the scene.

Now here’s the potential smoking gun: Sikes told the reporters that "I was reaching down and trying to pull up on the gas pedal. It didn’t move at all; it was stationary." That’s awfully daring for somebody who insisted he didn’t even want to take a hand off his steering wheel, notwithstanding that he did so to hold his phone.

I tried to imitate Sikes’ alleged effort in a 2008 Prius. From the front bottom of the steering wheel to the front bottom of the accelerator in up position it’s 28.5 inches; while fully deployed it’s 2.5 inches farther away. I have average-length arms (33-inch shirt sleeve) and no gut. But even though the steering wheel was as flush to the dashboard as it goes, it prevented me from all but touching the accelerator in the up position.

To reach behind a deployed accelerator and get any kind of a grip you’d have to add at least three more inches. In my case, it required squashing my face against the radio and completely removing my eyes from the road. Only the tallest men could physically do what Sikes claimed he did and no press accounts refer his being exceptionally tall. But to settle this issue (albeit not the others), Sikes would simply have to sit in his Prius and show he could reach behind the pedal while it was fully depressed. Why has nobody asked him to do so? Moreover, even for an orangutan it would be an incredibly awkward move for somebody afraid to pop a car into neutral or hit the ignition button. And not incidentally, when the assisting officer checked inside the car he found the "stuck" accelerator had somehow become unstuck.

So why did he do it? Sleuth work at the Web sites Jalopnik.com and Gawker.com reveals that Sikes and his wife Patty in 2008 filed for bankruptcy and are over $700,000 in debt. Among their creditors is Toyota Financial Services for a lease on a 2008 Toyota Prius, with value at time of bankruptcy of $20,494. The Jalopnik Web site shows a copy of Toyota’s secured claims form, though when Jalopnik questioned Sikes by e-mail he denied being behind on his Prius payments. 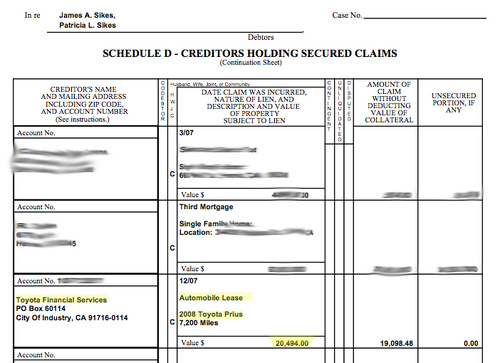 Sikes also has a history of filing insurance claims for allegedly stolen items that are slowly coming to light. In 2001 he filed a police report with the Merced County Sheriff’s Department for $58,000 in stolen property, including jewelry, a prosumer mini-DV camera and gear, and $24,000 in cash, according to Fox40 in Sacramento. His bankruptcy documents show a 2008 payment of $7,400 for an allegedly stolen saxophone and clothes.

For what it’s worth, Sikes owned and operated a Web site called AdultSwingLife.com. More salacious material on this man will continue to pour in.

But the press conference alone makes it clear Sikes’ story didn’t wash. Journalism schools are supposed to teach that skepticism is paramount. "If your mother says it, check it out," goes the old adage. Yet comments on Web sites across the country reveal that practically everyone thought the Prius incident was a hoax—though they couldn’t prove it—except for the media.

They have been as determined to not investigate Sikes’ claims as Sikes was to not stop his car. It’s a Toyota media feeding frenzy and the media aren’t about to let little things like incredible stories and readily-refutable claims get in the way.