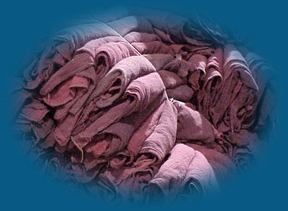 These laundered shop towels may look clean, but appearances deceive.

EPA regulations are like a ratchet wrench. The agency will tighten them with the least excuse, but no amount of new information will ever convince it to loosen them. Thus it’s utterly bizarre that the EPA is now indeed proposing relaxing rules on something that’s truly an environmental hazard. Even the agency’s bosom buddies like the Sierra Club are stunned. "This proposed rule leaves workers, the environment, and our communities at risk from toxic chemicals," Sierra Club representative Tanya Tolchin told me.

The proposal concerns industrial shop towels or "industrial wipes." These can either be made of reusable cloth or throwaway paper. Thousands of U.S. printing facilities, manufacturing shops and other businesses use over three billion wipes each year to clean up grease, cleaning solvents, and various chemicals** – **some of which cause human cancer.

The EPA’s proposal favors reusables by redefining them so that they’re no longer considered hazardous waste as long as they’re not literally dripping with goo. At the same time it greatly increases the requirements for storage and disposal of the paper wipes.

Shop workers will suffer most. That’s because when the reusables come back from the dry cleaner or laundry they are not completely clean, but rather still contain small amounts of chemicals and perhaps metal shavings. Shop workers who use them inevitably touch their faces, eyes, and tongues and absorb the contaminants.

A recent study by the Massachusetts-based environmental consulting firm the Gradient Corporation found that employees who use merely 2.5 laundered shop towels per day would on average absorb an amount of lead that’s a stunning 27 times higher than California’s limit for worker exposure.

That’s why some California legislators are considering severe restrictions against what they call "toxic towels," including perhaps a ban. 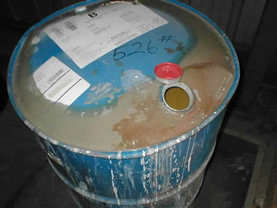 This is the by-product of laundered shop towels – until the EPA changes the definition.

Many organizations such as the Union of Needletrades, Industrial and Textile Employees (UNITE) also fear for laundry workers and thus vehemently oppose the EPA proposal. But at least reusables are better for the environment** – **or so says their lobby. The President and CEO of the Uniform and Textile Service Association "praised the EPA for deciding to exclude properly handled reusable shop towels from solid waste regulation," declaring "it will encourage reuse, recycling and resource conservation."

Gosh, that sounds swell. But while the triple-R mantra may still be a hit with the tykes who watch Barney the Politically Correct Dinosaur, we now know that the benefits have been grossly overstated.

All of America’s trash generated over the next 1,000 years would fit into a landfill merely 44 miles square and 120 yards deep. Considering that even disposable diapers comprise at most two percent of landfill space, the contribution of paper shop towels is obviously negligible. Meanwhile more trees for producing paper are being grown than ever.

In any case, reusable wipes last only about 10 to 15 times according to the EPA. Then they too land in a landfill.

Meanwhile, dry cleaning of the reusables usually involves using a solvent called perchloroethylene or tetrachloroethylene. The federal government classifies this chemical as hazardous waste, while according to the International Agency for Research on Cancer it’s "probably carcinogenic to humans." The IARC label is debatable, but how ironic that the EPA wants to ease requirements on materials containing hazardous waste that themselves lead to producing hazardous waste!

If the reusable towels are laundered, then where does the extracted goo go? Some goes into sewage systems which** – if they overflow – **dump into our lakes, streams, rivers and eventually our water supplies. And the rest? Yup, the sludge "is commonly disposed in municipal landfills," according to a Lockheed Martin Environmental Services study that the EPA itself commissioned.

In fact, Lockheed concluded that 30 percent more solid waste is sent to landfills from the processing of laundered wipes than from disposables. It also said the sludge from laundered wipes is potentially more threatening to human health and the environment. "Water washed sludge contains approximately 22 percent water which could increase the mobility of these pollutants into soil and groundwater," it stated.

Conservatives have never trusted the EPA to really concern itself with protecting the environment, even under the administrations of conservative Presidents like Reagan and George W. Bush. With groups like the Sierra Club and UNITE now fighting this outrageous proposal, perhaps the liberals are also catching on.