Until now, the U.S. has been relatively immune to the hysteria over bioengineered crops that has swept Europe, where many stores refuse to carry what are popularly called "Frankenfoods." Suddenly, though, the heretofore weak American antibiotech movement has a powerful rallying symbol: the monarch butterfly.

It began with a letter to the British science journal Nature describing a study concerning monarch larvae (caterpillars). They had been fed corn pollen that had spliced into it a gene from the insect-killing soil bacterium Bacillus thuringiensis, or Bt, which allows the corn to kill insect predators. About a fourth of the nation’s corn crops are Bt-engineered, allowing them to kill pests and obviating the need for insecticide sprays.

The study proved little more than that caterpillars force-fed Bt corn pollen may get sick and die.

The researchers, headed by Cornell’s John Losey, found larvae that ate milkweed leaves coated with the pollen consumed fewer leaves and grew more slowly than unexposed larvae did. Nearly half died within four days, compared with none that ate leaves without pollen. Headlines from the ensuing media maelstrom: "Attack of the Killer Corn" (U.S. News & World Report). "Monsanto vs. The Monarch" (St. Louis Post-Dispatch.) "Nature at Risk" (Scripps-Howard). Reporters rhapsodized about the "Bambi of insects," while the European Union froze the approval process for Bt corn.

The study proved little more than that caterpillars force-fed Bt corn pollen may get sick and die.

In truth, it’s hardly clear that Bt corn poses any danger to the monarch butterfly. Numerous entomologists and botanists I’ve interviewed say that Mr. Losey’s lab conditions were so artificial as to have little in common with those in the great outdoors. The researchers coated the leaves of milkweed plants — believed to be the only food monarch larvae eat — with Bt corn pollen. Mr. Losey’s larvae had no clean leaves to choose; it was eat pollen or starve. In contrast, in the wild, if larvae come across a leaf with Bt or any other pollen on it, they leave for another leaf. "They’re not interested in eating anything but a nice clean leaf," says Warren Stevens, senior curator of the Missouri Botanical Gardens in St. Louis.

While most corn pollen falls onto the field itself, farmers fastidiously keep milkweeds — which are, after all, weeds — out of the rows. So Bt pollen can reach them only if carried by the wind outside the field to where milkweeds may be growing. "They can be found along the edge of fields, but are primarily in pastures and old fields," says Galen Dively, a University of Maryland entomologist.

Mr. Dively once planted sterilized corn near fertile Bt corn, then measured the number of kernels on the cobs of the sterile plants to see how much pollen reached them. "Once you got beyond 30 feet, [fertilization] pretty much began dropping off," he says. "And by 100 feet you basically had a bare cob. Not much pollen made it that far." He concludes: "I don’t think much milkweed grows close enough to corn fields where they would receive pollen." 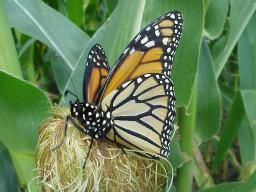 Monarchs don’t dislike corn, but they won’t eat the pollen — if they can help it.

Add to this that corn plants only pollinate for a few days and monarch larvae only feed for a few days. Depending on weather conditions, there may be anywhere from a week’s overlap between pollinating and feeding to no overlap whatever. Further shortening that time, larger larvae are much less susceptible to Bt, says Michigan State University entomologist Chris DiFonzo. But Mr. Losey’s lab "used little larvae, ones just hatching out of the egg," Ms. DiFonzo says. "If they had used larger larvae, they may have seen no effect at all."

Mr. Losey himself acknowledged the limits of his study. In a press release the media chose to ignore, he was quoted as saying: "Our study was conducted in the laboratory, and . . . it would be inappropriate to draw any conclusions about the risk to monarch populations in the field based solely on these initial results."

In fact, Mr. Losey’s study proved little more than that little monarch larvae force-fed Bt pollen may get sick and die. This has already been known for years, notwithstanding the New York Times’s declaration that this "provided the first evidence that pollen from a [bioengineered] plant can harm non-pest species."

Further, Bt corn, by rendering insecticide sprays unnecessary, protects other "friendly" insects. "Before Bt crops, our sweet corn had to be sprayed eight to 10 times," says Mr. Dively. "Now it’s not sprayed at all. That used to kill a lot of lady-beetles, another ’Bambi of insects.’ That’s no longer happening."

And while the Bt threat to monarchs is speculative, the cost of a ban is not. The use of Bt-engineered corn saves farmers — and consumers — over $1 billion a year from reduced spraying costs and increased crop yields. As Mr. Losey says in the press release: "The proven benefits of Bt corn outweigh the potential risks."

The issue here is not just corn but biotech in general. The British Medical Association has demanded a moratorium on planting all biotech crops, and even Prince Charle — whose occupation perhaps gives him a special affinity for the monarch butterfly — asks: "If [biotech] plants can do this to butterflies, what damage might they cause to other species?"

Such actions and words appeal to people who don’t realize that virtually everything we eat is already the result of man’s handiwork. The difference is that formerly two animals or plants were crudely crossbred in hopes the right genes would come out of the mix. Biotechnology allows a single gene to be isolated from an organism and inserted into another, with much faster and more predictable results. It also allows crossing species that formerly could not have been combined.

Biotechnology can enable plants to protect themselves not just from insects but from weeds and fungi and to rely less on fertilizer. Bioengineered crops will provide much higher yields on the same amount of land and grow in less hospitable soils and climates. They will contain far more vitamins, protein and other nutrients. Some, when eaten, will vaccinate people against scourges like cholera and malaria.

We ought not allow such progress to be brought to a screeching halt by a beautiful little insect and a letter to a science journal.