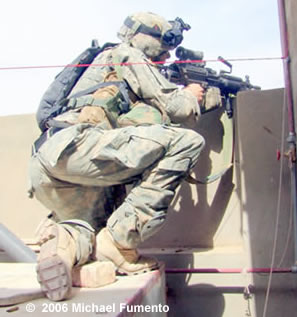 Rob Killion firing his M-249 SAW shortly after almost being hit by a sniper. Note ejected casing in mid-air above the red pump handle.

It’s only fitting that I met Spc. Robert Killion during one of the fiercest gun battles of his 12-month tour in the wild-west Iraqi city of Ramadi in Al Anbar province. I was originally on the other side of the top of a house behind a machine-gunner, hoping to photograph him with shell casings ejecting from his weapon as he fired. But all the firing was coming from the other side. "Way to go Killion!" shouted the soldier in front of me. So I hauled tail over there, taking up position just behind this tall, lanky GI as he keenly scanned the streets below with his M-249 5.56 millimeter squad automatic weapon (SAW). Of four confirmed enemy kills for his entire unit that day, Rob got three from that position.

He had just shot a jihadist on a bicycle, which I narrated into my camcorder. "Now don’t just say he was on a bicycle," Killion corrected me. "He had an AK. I don’t shoot nobody just because he’s on a bicycle." I laughed as I corrected the record. Joking during fights is not only acceptable, but perhaps mandatory. "Otherwise you’ll lose your mind," Rob told me later. The dead jihadist indeed had a rifle next to him, so I knew he wasn’t plunking innocent bystanders. But it was important to him that all those people who would soon be downloading the video clip on YouTube knew as well.

In that same video clip a sniper nearly beans Rob, the round ricocheting off the top of the wall over which he’d been leaning. He utters a few unprintable epithets, then yells: "That hit right in front of me!" But seconds later he whoops "Whew! Yeah!" thus reflecting Winston Churchill’s observation that "nothing in life is so exhilarating as to be shot at without result." Then he fires at another jihadist and I get the shot I was waiting for, his SAW pounding away while the ejected cases bounced off my body armor chest plate.

After we left the building and scrambled through an ambush that had us looking like the soldiers at the end of "Black Hawk Down," I kept snapping photos and shooting video and darned if time and again Rob wasn’t right there in the thick of it – perhaps in half my photos of the fight.

Was Rob Killion an exceptional fighter even among this elite unit, 1st Battalion, 506th Infantry Regiment of the 101st Airborne Division (Air Assault)? Perhaps. But as fleet Admiral Chester W. Nimitz said of the Marines who stormed Iwo Jima, "Uncommon valor was a common virtue" among these men. Only later did I discover that perhaps his most exceptional aspect is his family. 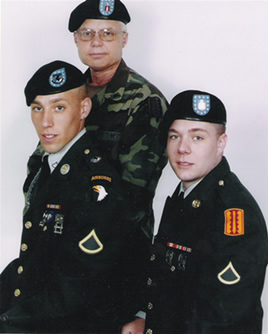 From left to right: Rob, Rick, and Doug

Rob’s brother, Douglas, also joined the military but went the National Guard route notwithstanding that he knew he’d end up in Iraq just like Rob would. Doug is 27, Rob 21. Having one child in the military is rare enough these days; two all the more so. But here’s the kicker: their father, Rick.

Rick Killion had been a cadet in the Civil Air Patrol from 1972-1976, whereupon he then enlisted in the Air Force in 1976. That’s where he met Cheryl Newcomb, who was also in the Air Force, and soon married. She gave him his two children. Rick was an avionics technician, which keeps you about as far from combat as you can get, until exiting the service in 1980 at the rank of sergeant (E-5).

Five years later, he was back in the military with the Indiana National Guard. (The family lives in Bloomington.) An organizational realignment left his unit over strength, so he got out and joined the Air Force Reserve as a staff sergeant (E-6). Again his unit became over strength so Rick left, thinking his military days behind him. He got a good job as an electronics and telephone technician at Indiana University.

Their cousins, the Hillenburgs, had served in every U.S. conflict back to the Civil War. The first to die, however, was 21-year-old Marine Lance Corporal Eric Hillenburg, who was killed by small arms fire in Fallujah two days before Christmas 2004.

After Sept. 11, when most of us were utterly horrified and then went back to business as usual, the Killions felt the pull of history. Rob enlisted in the active Army in July 2003 at age 18. "I joined the infantry," he says, "because they’re the best." Douglas enlisted in the Indiana National Guard in 2003 at age 24 as a communications specialist. Even Rob’s wife, Anya Kormanos Killion, is an Iraq vet. She served there before Rob enlisted. They met at the 101st’s home in Fort Campbell, Kentucky and she is now a civilian.

Now it was Rick’s turn. At 46, he was well past prime fighting age and was comfortable in his job. But he knew where his boys were headed and he wanted to be there with them. So "OMK" as they call him, short for "Old Man Killion," once again raised his right hand and rejoined the National Guard. Because of the length of his absence, he had to give up a stripe and enter as a sergeant E-5. But he made sure that if Doug deployed, so would he.

Rob shipped out to Ramadi, Iraq’s most dangerous city and the home of the insurgency. Rick and Doug followed shortly after to Mosul, north of Baghdad, which isn’t the most peaceful place in the country either. In a conventional war, both Rick and Doug would be staying safely in camp practicing the trades for which they trained. But in a guerrilla war fought with a paucity of boots on the ground, both regularly went outside the wire and exposed themselves to the same risk as the grunts.

For now, all are safe back home. Rob and his unit redeployed back to Ft. Campbell in November. I had the pleasure of seeing him and meeting his wife at the 1/506th annual ball in February. Rick and Doug returned home to Indiana on Christmas Eve. Rick and Doug both think they’ll probably re-up when their terms end in 2009. Rob, whose enlistment ends in July 2008, will probably redeploy to Ramadi later this year. He says he doesn’t mind that but thereafter plans to leave the service and open a restaurant in New Hampshire.

Heroic families like the Killions are inspiring to us all, but at the same time they illustrate what may be the single greatest weakness in the war on terror. The greatest sacrifice most of us make is not bringing liquids on a plane. It’s not just that so few serve in the military - less than one percent of the population including active duty, the Guard, and the Reserves – but also where those troops come from. The south contributes far more than its share, the northeast far fewer. Rural areas contribute disproportionately as well. The Killions deserve the thanks of a grateful nation, but it will take a lot more than these isolated pockets of courage and sacrifice if we are to prevail in the war on terror.