That the new World Health Organization-Iraqi government study of war-related Iraq deaths reached wildly different conclusions from two much-hyped reports in the British medical journal the Lancet is no surprise to anyone who has followed the issue. But the new study highlights the fanaticism of the Lancet and its defenders and illustrates yet again the bias of mainstream media coverage of the Iraq war.

In late October, 2004 Lancet published a report estimating 98,000 war-related deaths in the first 18 months of the conflict. Two years later, the Lancet updated that figure to a stunning 655,000 Iraqis dead by July 2006 as a consequence of the March 2003 U.S. invasion, with 600,000 of those directly from violence. The media stood at attention and saluted. "Within a week, the study had been featured in 25 news shows and 188 articles in U.S. newspapers and magazines, including the New York Times, the Washington Post, and the Los Angeles Times," according to an excellent investigative report in the January 4 National Journal. CBS News called the 2006 Lancet report a "new and stunning measure of the havoc the American invasion unleashed in Iraq."

Inevitably, the World Socialist website demanded: "Why is the American press silent on the report of 655,000 Iraqi deaths?" Too bad it wasn’t – silence (or at least a modicum of skepticism) is what should have greeted the Lancet report.

The latest study, called the Iraq Family Health Survey (IFHS), was published in the January 9 issue of the nation’s most prestigious medical journal, the New England Journal of Medicine. It found an estimated 151,000 excess violent deaths from the U.S-led invasion in March 2003 through June 2006, when compared to violent deaths in the prewar period. This is roughly one-fourth the war-related deaths found by Lancet in 2006. Further, for the most recent comparable reporting time periods for both surveys, it found the Lancet 2006 number to be more than seven times that of its own survey. And other estimates indicate the IFHS figures themselves may be too high.

One estimate that’s far lower even than the IFHS figures comes from IraqBodyCount.org, the antiwar website which at the time of Lancet 2004 reported 14,000-16,000 war-related deaths. Even now Iraq Body Count tallies fewer than 90,000 fatalities. Its figures, according to its website, include "individual or cumulative deaths as directly reported by the media or tallied by official bodies (for instance, by hospitals, morgues and, in a few cases so far, NGOs), and subsequently reported in the media." It doesn’t, however, include combatant deaths among Iraqis, which would be picked up by household surveys like that of the IFHS. (Osama bin Laden himself in his pre-election 2004 video used the Iraq Body Count figures to decry the volume of blood spilled by the infidels.) 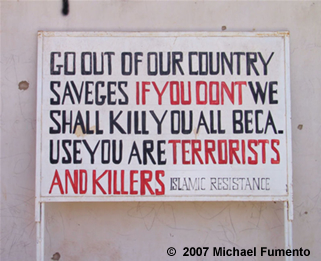 This "document" in Karma, Iraq (near Falluja) would probably pass peer-review at The Lancet. Photo by Michael Fumento. Click for larger image.

Then there’s the U.N-conducted Iraq Living Conditions Survey 2004 (ILCS). Using a dataset significantly larger than that of either of the Lancet studies – 22,000 households versus 988 for Lancet 2004 and 1,849 for Lancet 2006 – it found 24,000 war-related deaths from the opening of the war until May 2004. That’s only the first 14 months of conflict compared with 18 in Lancet 2004, but it does stretch the imagination that in those ensuing four months the numbers of deaths somehow quadrupled.

Only one source found higher numbers than either Lancet paper – a poll by the British Opinion Research Business (ORB). It claimed in a September 2007 press release that "more than 1,000,000 Iraqi citizens have been murdered since the invasion took place in 2003." (Emphasis added.) The polling ended in August 2007, and the actual alleged death toll was over 1.2 million.

"Murdered" isn’t the language of the staid, neutral polling organization that its defenders claim ORB to be. Yet surely only a hardened cynic would assert that ORB’s purpose was to make the Lancet figures seem to be in the ballpark despite all other studies showing otherwise.

Or perhaps it wouldn’t take a hardened cynic. "The key importance of the [ORB] poll," claimed one leftist British "media watch" organization, "is that it provides strong support for the findings of the 2006 Lancet study, which reported 655,000 deaths."

Big numbers can be hard to wrap your mind around. Fortunately, the IFHS paper breaks the figures down so they are more comprehensible, and so doing utterly damns the Lancet assertion.

Put another way, those 925 Lancet deaths extrapolated to the U.S. population would be 10,763 killings each day. Doesn’t that seem just a bit implausible? Moreover – and this one figure alone is enough to entirely damn the Lancet’s claims—the 2006 study says 18 percent of the deaths during the period in which those 925 killings occurred resulted from car bombings. That’s an amazing average of 166 daily.

These bombings are fastidiously reported in the U.S. media and Wikipedia keeps a comprehensive list of major car bombings in Iraq. Yet the highest single-day total it has for that period is 114, or 42 short of the alleged average. Iraq Body Count could hardly miss any of these deaths; yet remember their total average of killings from all war-related causes for that period was 55.

For a massive number of other red flags having nothing to do with the actual numbers, you will want to read the aforementioned National Journal article "Data Bomb" by Neil Munro and Carl M. Cannon. But here’s one: While it’s widely known that the Lancet authors refused to release their data to be evaluated by outsiders, there has been little talk about Riyadh Lafta. 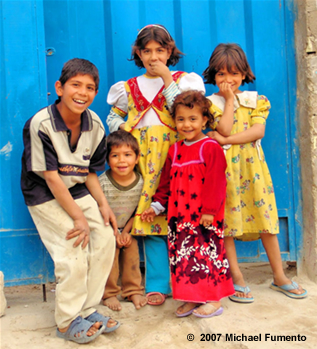 The Lancet put Saddam-supporter Riyadh Lafta in charge of doing its household surveys and he operated essentially without supervision. Yet Lafta didn’t just work for the Saddam government; he provided and publicized the numbers to support the dictator’s claim that U.N. sanctions were causing massive deaths among tykes like these. Photo by Michael Fumento. Click for larger image.

Lafta was the man in charge of the actual collection of numbers, while another Lancet author was in Iraq but holed up in a hotel. As National Journal notes, Lafta was also a high-ranking official in Saddam Hussein’s ministry of health and there authored some of the agit-prop papers about the vast number of small children dying from sanctions the U.N. imposed after the 1990 invasion of Kuwait..

The assertion that half a million Iraqi children had been killed by sanctions was criticized by no less than the Nation magazine, which noted that in the autonomous Kurdish region in the north child mortality rates actually fell. It opined that laughable assertions that blamed the results of Saddam’s cruelty on the U.N. could only undermine efforts to lift the sanctions.

So Lafta doesn’t exactly fit the definition of a trustworthy researcher except in the sense of trusting him to come to the "proper" conclusions. (Richard Garfield, a coauthor of Lancet’s _2004 study who kept his name off the 2006 paper, told the _National Journal he personally had studied "how Saddam had pilfered cash [intended] for the health care system.")

At most scientific journals, alarm bells might have gone off over the likely biases of a Riyadh Lafta. But the editor of the Lancet, physician Richard Horton, has unapologetically used the journal for advocacy on other issues, including a notorious 1998 paper that created an international panic over the safety of the childhood vaccine for measles, mumps, and rubella [the MMR] – linking it to autism and bowel disease.

That paper became a full-fledged scandal, with 10 of its 13 authors demanding their names be withdrawn from it. The other three are fighting to keep their medical licenses. Horton’s reaction? He proudly said he had "no regrets" and pompously declared: "Progress in medicine depends on the free expression of new ideas." (The British press reported "an unprecedented surge of measles cases" this summer, probably traceable to unwarranted fears of the vaccine. Some progress.) 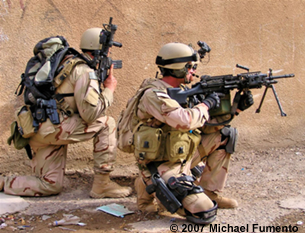 Shortly after this photo was taken in Ramadi, SEAL Mike Monsoor (right) gave his life in the belief that he was helping the Iraqi people. Agree with him or not, but it’s in stark contrast with Richard Horton who expresses his beliefs by publishing false papers and shouting himself hoarse at rallies. Photo by Michael Fumento. Click for larger image.

Horton spoke at a rally in 2006 sponsored by Stop the War Coalition, a British group set up on September 21, 2001, which is to say its purpose was to oppose punishing and defeating the perpetrators of the 9/11 attack. At the rally, Horton shouted about the "mountain of violence and torture" in Iraq – and no, he wasn’t talking about Saddam. "This axis of Anglo-American imperialism extends its influence through war and conflict, gathering power and wealth as it goes, so millions of people are left to die in poverty and disease," he angrily added. Watch the histrionics on YouTube. This is not your father’s medical journal editor.

As National Journal revealed, Lancet’s 2006 study was about half funded by antiwar billionaire George Soros, who in a November 2003 Washington Post interview said that removing President Bush from office was the "central focus of my life" and "a matter of life and death." This no doubt explains the release of the Lancet study four weeks before the 2006 midterm elections, just as Lancet’s 2004 study was released days before the presidential election. Even the magazine’s ardent defenders don’t claim the timing was a coincidence.

The 2006 Lancet report states only, "Funding was provided by the Massachusetts Institute of Technology and the Center for Refugee and Disaster Response of the Johns Hopkins Bloomberg School of Public Health." Soros is known for concealing his massive political donations, and the Lancet was complicit on this occasion. 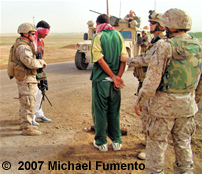 It may look like these American troops are taking into custody insurgents who tried to set off a a powerful IED (the shell was 130 millimeters), but in fact the infidels are merely contributing to the 925 Iraqis

There is "far more in common in the results than appears at first glance," he has said. Or at second or third glance, he might have added. As if there could possibly be anything consistent with one survey that finds more than seven times the deaths as another survey over the same reporting period.

It therefore appears that we can expect, just before this year’s national election, a new Lancet survey in which the American imperialist troops and their Iraqi puppets will be shown to have killed every single Iraqi. Twice.

CLARIFICATION: In the version that appears in The Weekly Standard paper edition, in the second paragraph, the Lancet 2006 figure is correct but it should have been noted, as I have here, that a slightly lower figure of 600,000 was attributed directly to war violence. All further references and comparisons, whether as paraphrased by me or as quoted in the IFHS study, are to the lower violence-only figure.