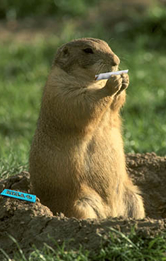 If you think you’re getting the straight dope from the media on Iraq, then you must be smoking dope.

I traveled to Iraq essentially for two reasons. First, I believed the mainstream media for whatever reason were missing many important stories. [And sometimes outright lying, as this indicates.] Second, I believed you had to see the war to truly understand it. I was fed up with the pompous pontificating pundits who can go to Iraq anytime but prefer the comfort and safety of home. I paid the price for my trip; a part of me will always remain in Iraq – literally. But I was right on both counts.

I observed that troop morale in even the most hostile areas was better than I would have believed. Unless I identified myself, nobody knew I was a reporter; there are civilian contractors everywhere. If the troops had antiwar feelings they didn’t hold them back on my account. Yet I heard none. I also carefully read the ubiquitous graffiti in the portable toilets and only once found a negative scrawling – a Bush bash. But three other scrawlings ambushed that first one.

The military has worked doggedly on morale. Mess hall (excuse me, ”cafeteria”) food was incredibly delicious and varied. It so hot outside you could barely eat, but don’t blame the chow. The vast majority of troops have hot showers superior to what you find in many European hotels. Toilet facilities were odor- and fly-free. I was stunned to find that the living quarters are almost universally air-conditioned.

Unfortunately, the ultimate stressor is something about which the military can do nothing: being 9,000 or more miles from home, family, and friends. I pitied the troops for this. But even this blow was softened by discount telephone cards in trailers filled with phones and with Internet cafes. (The second greatest deprivation may be that alcoholic beverages are forbidden in deference to our Muslim allies.)

The only real complaints I’d heard were about ”the kindler, gentler military.” Political sensitivity – enhanced by shenanigans such as Newsweek’s – are tying at least part of an arm behind our backs. A hospital roommate in Germany, who complained about nothing personal despite having turned his hands into ”crispy critters” while handling a power line, nevertheless related to me such stories as three captured suspects who had their hands sprayed with a chemical that makes gunpowder residue practically glow. Yet his higher-ups said to simply release them because the spray was still experimental.

Opposite me in the Baghdad hospital recovery room was an Iraqi with two gunshot wounds received a week apart. I was told he was shot once running away from an improvised explosive device (IED) trigger but had nonetheless been treated and released, partly in hopes that American hospital hospitality might give him a change of heart. Tough luck. A week later he was again shot running away from a trigger. ”Now he’s being released to Abu Ghraib,” I was told. ”So much for winning his heart and mind.”

Another proper complaint would have been medical treatment. I’d love the bragging rights of saying I was hit by hostile fire, but actually it was hostile temperatures (117 degrees) in body armor and a lack of sleep that did me in. My colon constricted because it couldn’t relax or get enough water, then became impacted and burst thereby flooding my body with bacteria. Untreated the condition is fatal. Yet the nighttime doctor at Camp Fallujah, who appeared to be an Iraqi national, actually tried to discharge me. I politely informed him that if he did, I’d die. 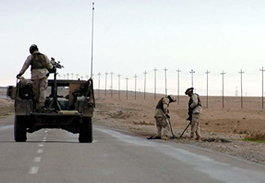 IEDs are usually placed in soft ground right next to the road. This device was already detonated.

That said, the day doctor had me quickly evacuated to Baghdad where I was pumped with antibiotics and a surgeon sliced out a section of the colon and gave me a colostomy attaching the lower part of my colon to the lower part of the belly and threading the upper part out my side. He saved my life and the colostomy will be reversible in a few months. The next problem, though, was the recovery room where the attendants blared heavy metal ”music,” joked around, and shouted at each other to be heard over the sound. My chart included a regular morphine dosing schedule to relieve the almost unbearable pain but time and again I was forced to beg for my medicine. Our wounded and sick troops deserve far better treatment than that.

Otherwise though, the professionalism of these men and women is almost indescribable. They were in incredible physical shape and each seemed to know exactly what his job was.

I spent one day with the Explosives Ordnance Disposal (EOD) unit of the 8th Engineer Support Battalion at Camp Fallujah – men with as risky a job as there is. It’s not the bomb being defused that’s worrisome (they use robots); rather it’s the snipers and secondary IEDs meant to kill you while you’re disposing of the bomb. But I never felt the least anxiety with these brave and skilled warriors.

I wish I had a chance to patrol with the Iraqi security forces to get a better idea of the mettle of the men to whom we will ultimately turn over this war. I know the Americans didn’t completely trust them, but only because in any group of Iraqis working with Americans there will be infiltrators.

On the other hand, I can say that I saw them everywhere, that each was equipped with full body armor, and that they held their weapons like professionals. They provided security for my EOD team and they manned a huge number of checkpoints. Several were ripped apart at one of those checkpoints days after I passed through it. The Iraqis are fighting and dying for their country. We need vastly more of them and their training must continue to improve. Yet they are the key to ultimate victory.

Overall – and this is based on both observation and outside study – I’d say the war is ours to lose, but I don’t think we will lose it. In a true guerrilla conflict, time favors the insurgency. But progressively this war has shifted to one waging non-Iraqi terrorists against primarily Iraqi civilians, secondarily Iraqi military and police, and last against Americans. Indeed, on one IED mission I joined MPs nabbed two men in track suits and tennis shoes running away from the trigger. Both wore head scarves with non-Iraqi-colors and they had Jordanian features.

It’s perfectly understandable that Iraqis resent any foreign troops on their soil. But they know the suicide bombers randomly turning Iraqi civilians into shredded wheat are also foreigners. They’re skeptical about a U.S. withdrawal, but they see the American route appears to be leading to independence. And they know the jihadist route is one too horrible to contemplate.