Is that plastic bag enclosing your sandwich or the pesticide residue on your apple causing you to, uh, shoot blanks during sex? Are man-made chemicals shrinking alligator penises, turning seagulls into lesbians, and performing wholesale sex change operations on lower forms of life? That’s the scary thesis of a new book called Our Stolen Future, which claims that we are surrounded by a sea of man-made hormonal disruptors and mimickers which threaten the very existence of animal species.

The book was written by World Wildlife Fund zoologist Theo Colborn, Boston Globe reporter Dianne Dumanoski, and J.P. Meyers of the environmentalists W. Alton Jones Foundation. In the forward, Vice-president Al Gore calls it the next Silent Spring, referring to Rachel Carson’s 1962 book that kicked off the environmentalist campaign against synthetic chemicals. But while Silent Spring (and the environmental movement to date) have primarily blamed them for cancer, Our Stolen Future is an apparent acknowledgment that this campaign is faltering scientifically and it’s time for a new gig. Hence the hormone disruptors.

Due to space limitations, this column will skip straight to the sperm charge, leaving the poor alligators to sort out things with their own tape measures. (As for the lesbian gulls, who could object to this so long as they really love each other?) Even before this book, environmentalists were playing up the sperm charge big time, with slogans such as Greenpeace’s "You’re half the man your father was." Major articles pushing the declining sperm thesis have also appeared recently in such magazines as The New Yorker, Esquire, and Mother Jones. 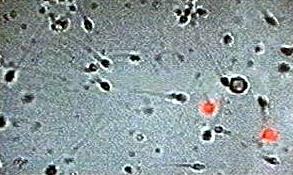 According to the doomsayers, sperm counts are falling so low we’re practically in negative territory. According to real scientists, they’re right where they should be. No sperm were available for comment.

Our Stolen Future focuses on the work of researchers Niels Skakkebaek and Richard Sharpe who indeed found a sharp decline in sperm production. But they also found that this leveled off in 1970 — hardly support for a theory that says a continual build-up of chemicals is causing this problem today. Indeed, Skakkebaek himself has said, "It is premature to call for a ban on these or any other chemicals before more research is done. They [environmentalists] are misrepresenting this research."

Somehow the Our Stolen Future authors didn’t have room for this comment in their 300-page work.

There are also three studies upcoming in the May issue of the journal Fertility and Sterility that show sperm counts are right where they’ve always been. At least one of the authors was surprised by his own finding that there was "no decline, none at all."

In a monograph just released by the Competitive Enterprise Institute, Jonathan Tolman covers this topic in great depth. He documents the remarkable battle for survival between Australian sheep and an innocuous looking clover. The sheep ate the clover. The clover struck back. But it did so not in the American way by hiring a lawyer but rather by sterilizing the sheep. It turned out to contain estrogen-mimicking compounds that kept the little lambs singing soprano for the rest of their lives.

Such compounds are ubiquitous in the plant world, according to Tolman. One hundred-forty-nine chemicals in 173 plants have been shown to have active estrogenic effects. Those are plants like barley, cabbage, carrots, corn, peas, and potatoes. Monsanto, Dow, or Uniroyal plants have nothing to do with it.

As one would guess, the amount of estrogen-mimicking chemicals we get from these plants greatly dwarf what we’re exposed to through pesticides, plastic wrap, and the such. According to Texas A & M University toxicologist Stephen Safe, the overall estrogenic effect of natural chemicals is 40 million times that of the synthetics.

Tolman says that if human sperm counts were declining, the most likely culprits would be plant oils, especially from soybeans and cotton seed oil. Crude cotton seed oil was accidentally found to completely prevent fertilization in a Chinese village in the 1950s. Numerous studies have shown that soybeans contain significant levels of two estrogen-like chemicals, including one that acts as birth control in Australia’s sheep. Soybeans are a relatively new addition to the human diet, practically unknown before the turn of the century. Today it’s our most ubiquitous oil and an average person consumes an estimated 65 pounds per year.

Since Tolman is skeptical of the declining sperm count reports, he doesn’t eschew soybean oil. But he says if he were to wag a finger, he knows in what direction it would go.

The authors of Our Stolen Future acknowledge the existence of natural hormone disruptors, but dishonestly say there are only a handful of such things and that anyway we eventually develop a resistance to chemicals that have been in our food supply a long time. Perhaps, but like soybean oil and cottonseed oil, much if not most of what we now eat hasn’t been in our food supply nearly long enough for us to have evolved defenses.

It’s little wonder that one of Our Stolen Future’s co-authors, Dianne Dumanoski, once told an environmentalist conference, "I’ve become even more crafty about finding the voices to say the things I think are true. That’s my subversive mission." If you believe this book, consider yourself subverted.