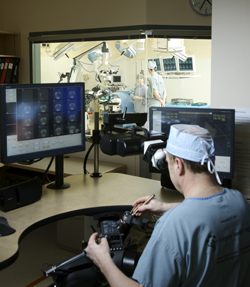 Dr. Garnette Sutherland manipulates the neuroArm from a control room next to the operating room. In the future, control rooms may be in separate countries.

Since the first modern neurosurgery was performed in the 19th Century, the highest compliment that could be paid a neurosurgeon is that "he has a steady hand." Unfortunately, despite tremendous advances in the field, hands haven’t gotten a bit steadier. One answer to this might be a bionic arm that uses anti-shake technology employed in today’s cameras and camcorders. But you’ll need surgeons willing to undergo amputation. A better solution is the just-announced neuroArm, one of the most advanced robotic devices ever invented, which combines shake-free scalpels with the ability to provide continuous Magnetic Resonance Imaging (MRI).

Robotic surgery itself is by no means new, nor is robotic neurosurgery. The Neuromate appeared in 1987 and a much-improved version is still sold. It was a given that neurosurgery would be one of the earliest applications of surgical robots. That’s because "Many of our microsurgical techniques evolved in the 1960s have pushed surgeons to the limits of their precision, accuracy, dexterity and stamina," according to Garnette Sutherland, the neurologist who led the neuroArm development team of the University of Calgary Medical Center/Calgary Health region. Hands could no longer cut it.

"NeuroArm dramatically enhances the spatial resolution at which surgeons operate, and shifts surgery from the organ towards the cell level," he says. That is, the best surgeons’ hands can work within an eighth of an inch, while neuroArm enables them to work accurately within the width of a hair, or less than 50 microns. "Neurons are 20-30 microns in size," Garnette told me, so "surgeons are able to manipulate structures that are just larger than cells."

Moreover, cutting and re-attaching tiny blood vessels is vital to all types of microsurgery. The very smallest of these of concern are arterioles that range in size from 10 to 50 microns – again putting them within neuroArm’s capabilities.

While neither of the two products most people believe were developed for the space program, Teflon (first sold in 1946) and Velcro (patented in 1955), actually resulted from space exploration, neuroArm does trace its pedigree to "The Final Frontier." It was designed and built in collaboration with MacDonald, Dettwiler and Associates Ltd. (MDA) based in British Columbia, Canada, known for creating Canadarm and Canadarm2. The first is installed on the space shuttle while the second is used on the International Space Station.

Conversely, the money for the high-tech neuroArm project, which began in 2001, came from a commodity as low-tech as there is: oil. Calgary philanthropists of the Seaman Family MR Research Center, brothers "Doc," B.J. and Don Seaman, provided $2 million from their drilling operations at Bow Valley Energy.

Sutherland emphasizes that the device needs to be seen as not just evolutionary but revolutionary, because there is a revolution going on in neurosurgery itself. One aspect involves something called stereotaxy, essentially 3-D mapping of the brain. Stereotactic neurosurgery was popularized only in the late 1970s, when computed tomography (CT) scans redefined the ability to look into the brain before the first cut of the scalpel. Later it was joined by MRIs. But until now, these could only be done prior to surgery or by interrupting the surgery. As this video shows, the entire operation can be performed inside an MRI machine, sending the surgeon a continuous stream of 3-D images as well as video. 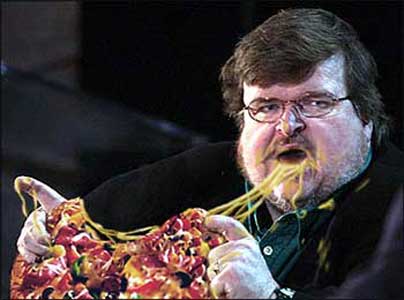 Michael Moore’s latest movie, "Sicko," neglected to mention that Canada has a fraction of the MRIs and other medical equipment that countries like the U.S. and Japan do.

Another is that neurosurgery is moving progressively away from cutting out things and towards inserting them. As it does so, "NeuroArm is ideally positioned to accurately place probes into the body," says Sutherland. Nanotechnology could tremendously speed up this progress not just because the probes can be so much smaller but because they don’t prompt buildup of scar tissue.

Thus, for example, even with the steadiness of neuroArm’s scalpel a doctor removing a brain tumor will necessarily either remove more brain tissue than necessary or less - with the latter allowing it to grow back. But probes can release radiation or chemicals to attack the tumor, either in conjunction with excision or without it. With neuroArm, exact removal of the complete tumor and only the tumor may still not be possible – but exact placement of the probe is.

Neural implants already in use, either experimental or FDA-approved, use electrical stimulation and other methods to treat epilepsy, depression, and other mental disorders for which drugs have failed.

Sutherland says he hopes to get both FDA and Health Canada (that nation’s medical regulatory body) approval for neuroArm this year and that a neurosurgeon can be trained on it in a mere two to three weeks. But, he says, he has no idea how much neuroArm units will cost when produced for commercial sale. Ironically, because of the spending constraints of Canada’s socialized health care system, it may be that most Canadians in need of the device will have to come to American hospitals.

Consider that to using neuroArm with an MRI machine means you need to have that MRI machine. But according to the latest figures from the Canadian Institute for Health Information, Canada ranked thirteenth among 20 OECD (Organization for Economic Cooperation and Development) countries with only 4.6 MRI scanners per million people, while Japan and the United States had the highest number with 35.3 and 19.5 per million respectively. The figures were even more dismal for CT scanners, with 10.3 per million in Canada compared to Japan’s 92.6 million.