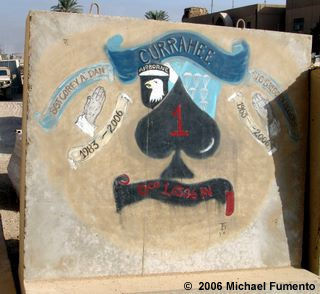 Despite what you may have heard, soldiers and Marines love having embeds and if you act like you deserve it they treat you like one of their own. They want somebody to document both their accomplishments and their sacrifices.

The number of embeds in Iraq is so small it’s grotesque. During the U.S.-led invasion in March 2003, more than 600 reporters, TV crews and photographers were embedded with Coalition Forces, according to the Associated Press. Last year, during the vote to ratify a new constitution, there were 114. At the end of September, there only 11 and one of them was me.

As I’ve observed elsewhere, embeds offer a unique perspective on the war in that they’re actually viewing it. Contrast this with the MSM Baghdad press corps that bizarrely believes it can cover a country of 26 million people and the size of California from hotels in a single city using stringers, phone calls, and email. In other words, they may as well be back in the States except for their desire to have the coveted title of ”War Correspondent.” Vietnam gave us the first war in virtually real time; Iraq is giving us the first virtual war.

Further, it speaks volumes that war critics like screenwriter-director Nora Ephron has vilified embeds, insisting they’re ”too close” to the war. And reporters in New York covering the WTC attacks should have been in Iowa, right? What Ephron is really saying is that the American public has no right to know what’s happening in Iraq. Embeds, through their actions, declare the opposite.

But what accounts for this dearth of embeds? Writings by Sig Christenson, until last month president of Military Reporters and Editors (MRE), picked up by CNSNews.com in a November 6 article, lay the blame squarely on the military. But based on my experience from three embeds in the volatile Sunni Anbar Province, I find Christenson’s conclusion lacking and his alleged statements of fact to often be flat-out wrong.

Christenson complains the emailed embed application is laborious. It is. But I’ve filled out online job applications that take three times longer to complete. If you can’t fill out a questionnaire from the comfort of your desk, you have no business going to war.

Then CNS, citing Christenson, reported on the alleged enormous flight costs. "The reporter must either wait to travel to Iraq [from Kuwait or Amman, Jordan] on a U.S. military flight or fly there commercially. Roundtrip airfares from the U.S. to Baghdad begin at about $2,000." Actually there are no roundtrip flights from the U.S. to Baghdad. You can fly commercial into Kuwait and hop a military flight for free. Or you can fly commercial into Amman and go military for free or commercial for a bloody fortune. United is offering roundtrip non-stop fares from Washington, D.C to Kuwait for $1,250 and to Amman, Jordan for only $999. 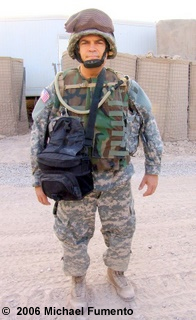 The author at Forward Operating Base Corregidor, Ramadi. Embedding in FOBs is uncomfortable and can be dangerous. It’s also probably the most rewarding job a journalist will ever have.

Christensen also wrote on the MRE website in September that going in to Baghdad to get credentialed "means risking your life on the ’Highway of Death’ from the airport to the Green Zone — if you can catch that 20-minute ride from the airport into town." Yet the armored Rhino van from the airport the International Zone, as it’s properly called, is always available and nobody aboard it has even been injured. And as I’ve noted elsewhere, the ”Highway of Death” is essentially both a name and a myth perpetuated by reporters demonstrating faux bravado. Both the Washington Post and USA Today have detailed how tremendously safe it’s become since the bad old days, with the Post title speaking volumes: ”Easy Sailing Along Once-Perilous Road To Baghdad Airport.”

Christenson even insists that once an embed receives his press pass, ”The problem with going through hell to get that card is it won’t get you into the KBR dining hall on any forward operating base in Iraq.” Wrong again. That press pass gets you into any chow hall in Iraq.

CNS also claims (not citing Christenson), "While in Iraq, a journalist usually stays in a hotel and is accompanied by hired security personnel whenever leaving the building. The arrangement can cost news organizations hundreds of dollars per day." But that’s only true of non-embeds. Embeds get free security courtesy of Uncle Sam and free room and board. Depending on where you’re based, the food may be more delicious than what you’re used to although accommodations vary from comfy-cozy to crummy.

The problem with all this nonsense is that Christenson’s major point about the lack of and yet need for embeds is absolutely true, but nonsense like this scaring off them or their editors can only make the situation worse.

He’s right that the embed process can be streamlined, but unfortunately one way or another you have to go through Baghdad. Fixed-wing flights to Ramadi or Fallujah are probably a long way off. He’s right that there have been egregious instances of reporters being punished for writing things that are not on the (fairly reasonable) list of forbidden subjects. I had a battalion public affairs officer demand I not even blog on wounded in his unit. I simply refused. But these are exceptions that must be severely protested, not excuses to stay home.

Being embedded in a combat zone — and if you’re not going to go outside the wire and risk your butt, why bother going — is easily the most exciting, rewarding job I’ve ever had. Dangerous and uncomfortable? Sure. But I think if more MSM reporters and freelancers realized how rewarding the risk is, we’d see those embed reporter statistics start climbing again.

If you’re a journalist looking for the experience of a lifetime combined with a chance to serve the public, fill out the embed form, make your other preparations, and get on that plane and go. Or spend the rest of your days regretting that you didn’t.