The headlines go on and on, but the point is made. The media and Gulf vet activist groups finally have evidence of a real manifestation of so-called Gulf War Syndrome, right? Wrong. The study actually showed a lower rate of defects among vets’ children.

Here’s how the Associated Press version began. "Children of veterans of the 1991 Gulf War are more likely to have three specific birth defects than those of soldiers who never served in the gulf, a government study has found. Researchers found the infants born to male veterans of the war had higher rates of two types of heart valve defects. They also found a higher rate of a genital urinary defect in boys conceived after the war to Gulf War veteran mothers."

That indeed is what scientists at the Department of Defense Center for Naval Health Research Center reported in a supplement to the journal Birth Defects Research in their evaluation of about 5,000 offspring born to Gulf vets after the war.

But those politically insensitive enough to be interested in good science and the truth might be curious as to what those findings mean and how the press so wrongly interpreted them.

To sort out findings that could happen just by chance, epidemiologists use something called "statistical significance." There must be a 95 percent possibility, or 19 in 20, that the result came about other than by chance. That means on average one of those 20 findings will be a statistical fluke.

So we really know nothing unless we know how many categories of birth defects the researchers looked at. Aye, and there’s the rub.

There were 48 birth defect categories among offspring of male Gulf vets. Therefore, just by chance, two aberrations would be expected – and two were found. 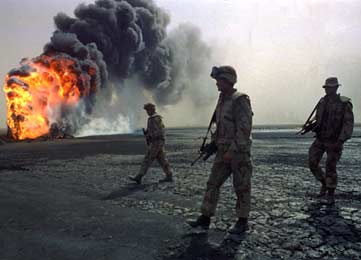 They fought to bring us peace; now who will fight to give them peace of mind?

The researchers did only assign risk ratings to 26 different categories, which is still enough to make two excesses unexceptional. But why only 26 categories? Because in the others there wasn’t a single defect in the Gulf vets’ children.

Likewise with the offspring of female vets there was that one excess, the genital urinary tract deformation. But again it was among 48 categories of birth defects.

There’s a name for this game; it’s called data slicing. And its only purpose is to try to find desired results rather than simply report what’s really there. Sometimes attention-seeking epidemiologists themselves do it to try to fabricate attention-getting positive results. But here the researchers honestly reported their findings. It was the media - along with the usual syndrome activist groups – that took the cleaver to the data.

Now here’s the kicker. The study explicitly states: "Birth defects affect one of every 33 live births." That’s 3.03 percent. Obviously, pooling all 48 categories gives a far more reliable result because as with any survey, the larger your sample size the more likely it is to represent the whole group.

Data slicing is wrong. It’s wrong scientifically and, when discussing so serious an issue as this, it’s morally wrong.

How many vets and their wives, upon reading these news articles, gave up on having children? How many others will still do so but live in terror for eight months awaiting the outcome? And didn’t they deserve to know – though nobody in the media or activist groups bothered to tell them – that a prior study in the prestigious New England Journal of Medicine analyzed not 5,000 Gulf vet babies but 34,000 and concluded: "This analysis finds no evidence of an increase in the risk of birth defects among the children of Gulf War veterans."

Finally, just how long will the syndrome charade go on before we tire of tormenting those who put their lives on the line for us the first Gulf War?