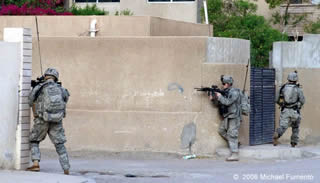 On patrol in the "OP Hotel" section of Ramadi, soldiers of 1/506th Infantry Regiment cover both sides of a crossing.

Ding-dong the wicked son-of-b—- is dead! Like the Wicked Witch of the East a house fell on him, or in on him anyway. Even some terrorists are glad Abu Musab al-Zarqawi is gone — he was giving murder and mayhem a bad name.

There I was repeatedly machine-gunned, sniped, and mortared as I detail in my ”The New Band of Brothers” article in the current Weekly Standard. And no, it wasn’t fun. But it’s given me a perspective that’s perhaps more sanguine than you’ll hear from desk-bound policy wonks — a perspective shared by those who’ve been fighting al-Zarqawi’s henchmen for a long time.

While in Ramadi and earlier in Fallujah, I saw much terrorist handiwork and was underwhelmed. They have some good snipers — one nearly popped the skull of a soldier standing right in front of me. But otherwise they seem genetically incapable of aiming weapons, relying instead on sheer volume of fire and luck. As for their ”ingenuity” with improvised explosive devices (IEDs), from January to mid-May 1st Battalion and its support elements had destroyed 667 of the bombs, inadvertently detonated 378 more without fatalities, and suffered deaths (five total) from only two.

First Battalion and its support elements routinely kills more than five jihadists in a single day. But such an incredible kill ratio is actually disturbing. As I witnessed, no matter how readily they’re mowed down — and with so little success themselves — the bad guys just keep on coming and coming. Their only real ”skill” is fanaticism. It would seem that the death of even so important a leader as al-Zarqawi might have little effect on such people, and Capt. Joe Claburn, commander of C Company, 1st Battalion says so.

”The impact will be minimal at best,” he told me by e-mail. ”Remember, these jihadists typically have no direct ties to their leaders. Al-Zarqawi was a figurehead, and now as a martyr he will continue to be. Someone else will step up into his place as the spiritual leader and self-proclaimed leader of Al Qaeda in Iraq.” 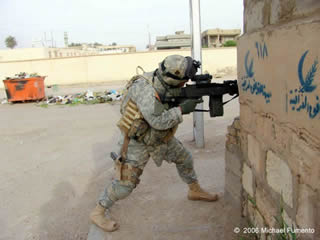 Ready for combat — and soon to see it.

The death was good for troop morale, he said. ”We felt like clapping and cheering when the announcement was made.” But as a PSYOPS tool, Claburn felt perhaps it fell short. ”We went out with loud speakers to exploit the death and encourage the people to finally stand up against the foreign fighters in Ramadi. We had an RPG [rocket-propelled grenade] shot at us shortly afterwards. I guess they didn’t like the message. :)”

He also worries that any favorable impact al-Zarqawi’s death may be countered by the allegations of civilian killings at Haditha, just northeast of Ramadi. ”They will cast a shadow over our successes yet again and it is frustrating,” he says.

Add to this that al-Zarqawi directly commanded a relatively small number of the bad guys in Iraq, and you might think his death almost meaningless, except that he did apparently plan and execute (Ahem!) some of the most damaging operations of the war. But even were his death only symbolic, it could be a powerful symbol indeed.

In Falluja I spoke with an Iraqi general who frankly told me success on the battlefield meant nothing more than the impact it has on the populace. Al-Zarqawi’s continued existence had become a terrible embarrassment for both the fledgling Iraqi government and military coalition forces; now he’s been sent down to his richly-deserved 72 perpetually renewing devils. ”The more the people trust the government, the easier my job becomes,” the general told me. His job is easier now.

Meanwhile, Claburn says, ”The good feeling has already worn off and we are back to concentrating on our job. There are a lot more bad guys to go after and a lot more things need to happen before we can call this place stable. We are getting there, but it’s going to take as much patience and determination to win here and throughout Iraq as it has taken to finally kill Al-Zarqawi.”