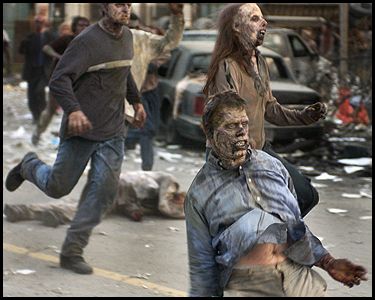 "This just in! The dead from New Orleans cemetaries are rising up and eating the living! Trust me, I’m the media!"

In the wake of Hurricane Katrina two sports were all the rage in New Orleans. One was the blame game, attributing all local and state incompetence to the feds. The other was inventing and spreading stories of murder and mayhem – killings, rapes, firing at rescuers, bodies stacked like cordwood.

But the accounts turned out to be grim fairy tales. They were also hardly harmless sensationalism – if there be such a thing; because of them people suffered and apparently died.

Among the horrors that never happened: * Editor & Publisher headlined an article, "Mortuary Director Tells Local Paper 40,000 Could Be Lost in Hurricane," while the French paper Liberation ran a detailed report on 1,200 people drowning in a single school.

If all of this sounds like something from a post-apocalyptic zombie movie, that’s pretty much what it was said by professional black rabble-rouser Randall Robinson. Four days after the storm "thousands of blacks in New Orleans are dying like dogs," he wrote, and "have begun eating corpses to survive." Just four days and already feasting on your friends?

Numerous articles since then have revealed there’s no evidence any of the above took place. The death toll for all of Louisiana, which is rather bigger than just New Orleans, appears to be about 1,000.

Yet for all of the talk about violent deaths that never materialized, it appears that the talk itself led to real deaths.

For example, efforts to evacuate by helicopter some of the 200 patients at New Orleans’ Charity Hospital were halted for a day because of reports of sniper fire. According to CNN’s Dr. Sanjay Gupta, two patients died awaiting evacuation. "The inability to get people out of these hospitals is frightening," he said.

Could he have known false reporting from his own employer had contributed to this nightmare?

The evacuation of the Superdome, where conditions may not have been as bad as described but were bad enough, was also halted because of unconfirmed reports of shooting at military helicopters. 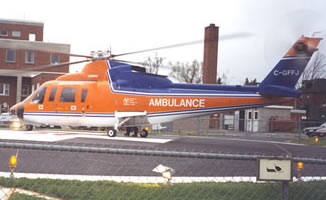 "We have suspended operations until they gain control of the Superdome," said the head of the ambulance service handling the evacuation of sick and injured people from the structure. He added that while the National Guard said it was sending 100 military police officers to gain control of the situation, "That’s not enough . . . . We need a thousand."

As to the military (active and Guard), the only heroes to come out of the debacle, the fast-flying rumors forced them to launch combat operations before switching to rescue mode. They also had to wear heavy body armor in terrific heat, which I know from experience slows you down in those conditions. Regardless that they weren’t really noshing on their neighbors, the last thing stranded residents needed was hampered rescuers.

Nagin also ordered virtually the entire police force to abandon search-and-rescue efforts in order to stop the non-existent "roving bands." Turns out some of the worst criminals were his own police, but even New Orleans’ not-so-finest weren’t killing or raping.

Pres. Roosevelt’s famous statement that "the only thing we have to fear is fear itself," was certainly an overgeneralization. But those trusted to relay the most accurate information available as opposed to the most grabbing must realize that fear can hurt and fear can kill.