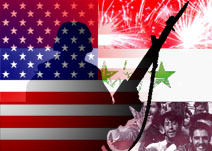 Everybody’s talking about it, but few seem to realize how exquisite a maneuver reducing US forces in Iraq is – unless you just want to cut and run as does Rep. John Murtha (D-PA). It isn’t a simple math formula such as, "If the rate of progress of the Iraqi forces continues, then I think we can replace the US forces man-for-man when the Iraqis are battle-ready" as Iraq’s finance minister Ali Abdul-Amir Allawi has suggested.

Regardless of battle-readiness, the Iraqi Security Forces (ISF) are almost entirely light infantry. They have little armor or artillery, no close air support, virtually no air reconnaissance, a couple of dozen small boats for a navy, and not even the proper bureaucracy to make sure men are even paid. Without all of these, they have no hope of prevailing.

Some American assets can move to Kuwait, such as fighter/bomber support. But even shorter-range helicopter gunships, the awesome AC-130 fixed-wing gunships, and A-10 "Warthogs" must be based in-country.

Why are Iraqis are not being trained with and given heavy weapons? Good question. The apparent reason is that if a civil war breaks out we’d rather they have access to nothing bigger than an RPG or mortar.

That attitude must change. Until the ISF is properly equipped and trained with all the trappings of a modern military, we’ll have to provide on-site support. This is one reason setting timetables is as dumb as the Bush Administration and military strategists say. A timetable for what?

That said, a modest draw-down of the right units in the short term and a more substantial one in the longer term could make a lot of sense. The enemy wages war for the most part not with the rifle but the improvised bomb. Fewer American troops mean fewer American targets. It could also help deflate terrorist claims that we’re a permanent occupying force. 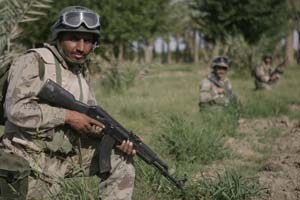 The ISF are improving and expanding, but remain almost entirely light infantry dependent on US support.

Iraqi leaders are also saying the US is holding them back from fighting the sort of war necessary to defeat savage terrorists. This echoes the only complaint I heard from Marines and soldiers when I was embedded in Iraq, that we were handicapped with a "kindler, gentler military." Yet in fairness, our government knows that it will be pilloried over the least claim of a human rights violation, while Iraq – as a Muslim country defending its physical turf – is given far more leeway.

But a complete pullout should no more be considered than was withdrawing from South Korea in 1953 or Germany in 1945, or for that matter from Afghanistan. Of course, we suffered few casualties in those Korean and German deployments so a better example might be the British experience in Northern Ireland.

Since 1969 the Brits have kept a small but elite military force there to suppress terror, and possible civil war, from both Catholic Irish Nationalists and their mostly-Protestant Unionist enemies. Britain bravely sustained casualties not only in Ireland but from terror bombings in England.

Yet they maintained their famous stiff upper lip and persevered. This past July, the most deadly of the factions, the Provisional Irish Republican Army, finally announced the end of its armed campaign and in September surrendered its weapons. Britain won, Ireland won, and peace has prevailed.

Need another reason to forget about a full withdrawal from Iraq? The world, especially the Islamist enemy, will not be oblivious to the fact that the same country that sacrificed 58,000 lives over nine years in Vietnam couldn’t stomach much more than 2,000 deaths and three years’ fighting in Iraq. Showing your vulnerable Phil Donahue side may impress your date, but it merely emboldens any enemy.

Finally, let’s not forget that the chief "insurgent" isn’t Iraqi at all but Jordanian Abu Musab al-Zarqawi, nor that fighters from throughout the Muslim world fill Iraqi detention centers. Iraq is now the focal point of the war on terror.

It’s therefore no paradox that that the same French government that vehemently opposed the US invasion now vehemently opposes American troops bidding Iraq "Adieu!" France cites both the threat of civil war and "a growing role of terrorism."

Whatever the time frame for withdrawal, it is neither just nor reasonable nor possible for the Iraqis to carry the burden of this fight alone.