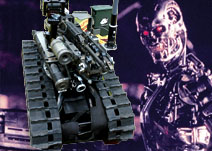 Time Magazine named it "one of the most amazing inventions of 2004," but to terrorists in Iraq it may be the scariest. By April, GIs in Iraq will be deploying 18 robots so small they could almost crawl between your legs. But don’t let size fool you; these motorized midgets pack a powerful punch. They can fire anything from a light machine gun to a six-barreled 40 millimeter grenade launcher or multiple rocket systems.

The Sword is the first armed variant of a track-wheeled robot developed by Foster-Miller of Waltham, Massachusetts called the TALON. That machine proved itself in Bosnia, Afghanistan, and Iraq in removing mines and other explosives. TALON robots have now completed more than 20,000 such missions and I was proud to find Internet photos of my former unit using them to protect Afghans.

The robo-warrior version has no independent capabilities like a T1 Terminator; rather it uses an outside operator with a viewing screen and joystick control. And like its flying cousin the Predator, its main job isn’t killing but reconnaissance. Swords can be equipped with off-the-shelf chemical, gas, temperature, and radiation sensors. They carry up to seven cameras of any combination including thermal, night vision, zooms, and wide area.

But like the Predator, when opportunity strikes it can too.

No offense to the skill of our fighting men, but Swords are far better shots. That’s because in the fear and confusion of a firefight, virtually no one remains as composed as on a firing range. In Vietnam, it took about 50,000 rounds to kill a single enemy. The Sword reduces that to something much closer to the sniper’s motto of: "One shot, one kill," because the operator is hidden anywhere from 200 to 1,000 meters away. He can coolly pick out targets as if playing a video game.

The Sword has many advantages over a soldier. It might get shot up but will never come home to grieving parents in a flag-draped casket. Even in cold economic terms it could be better to lose a Sword considering that the cost of simply training a soldier to get him to his first duty station is an estimated $50,000. A sergeant might represent an investment of hundreds of thousands of dollars. 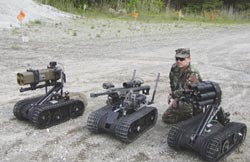 Another economic advantage is that those spent 50,000 rounds cost about $25,000. The price of the initial 18 Swords is $230,000 each, but according to Foster-Miller spokesman Arnis Mangolds that’s already been reduced to about $170,000 for the second set of 18 being made and could drop much further if manufactured on an assembly-line. The terrorists aren’t just trying to bleed us dry in blood but also in money; the Sword will slash away at both efforts.

The metal warriors are ideal for ambushes. The need to sleep, eat, and excrete all limit the ability of even the best-trained soldiers to lie in wait. (As one of those soldiers, I learned that few things are more exhausting than lying absolutely still for hours on end.) But the Sword can sit patiently in "sleep mode" in any weather for as long as seven days on a single lithium ion battery pack. Upon detecting the enemy, it would alert its operator and could directly contact those who can call in airstrikes or artillery. The Sword could then join the fray.

Swords can be armored, but this slows it them down and reduces battery life. Their main protection is their tiny size – about 30 inches tall, 22 inches wide, and 34 inches long. Further, "All the critical components are to the rear so bullets fired from the front would have to get through a lot of claptrap," says Mangolds.

If knocked over, a Sword dusts itself off and gets back on its treads. Nor is terrain a problem with these steel soldiers. They can climb stairs, go over rock piles, overcome concertina wire, plow through snow, and go through water. A Talon knocked off an Iraqi bridge into the river below was retrieved with its remote control.

Because it weighs merely 120 pounds, the Sword is easy to transport. And its small size makes it ideal for cave openings so tiny a man has to wriggle through them. A Sword might be the last thing a hiding Osama bin Laden ever sees.

With its capabilities steadily improving, the Sword will prove an important weapon in killing terrorists and saving American troops. Now if they could only get it to say "Hasta la vista, baby!"