The media need a chill pill. 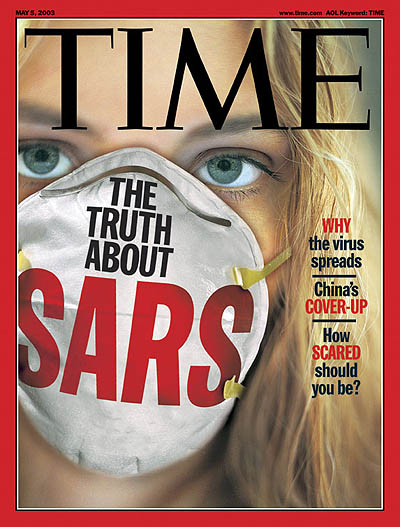 The truth about SARS is that this image should never have been on Time’s cover, nor that of Newsweek and U.S News & World Report.

and Newsweek were virtually identical: A terrified person wearing a medical mask emblazoned "SARS." The April 29 New Zealand Herald headlined: "SARS Surge Could Stretch NZ Says Annette King." Total confirmed New Zealand cases: one. "SARS could eventually kill millions," blared the New Scientist wire service, with no hint as to how this might happen. SARS "now threatens to plunge the world economy into freefall," declared the London Observer. The New York Times has printed over 330 articles mentioning the disease in the last 30 days, while even the staid Wall Street Journal published ten SARS articles on a single day.

University of Toronto Medical historian Edward Shorter calls SARS reaction "A media-fanned wave of mass hysteria," and "mass psychosis." But is he overstating the case?

According to the World Health Organization (WHO) as of May 6, 6727 cases of SARS have been reported since mid-November with 478 deaths. In what at a glance seems one of the few slight concessions to reality Slate reported: "SARS is not quite as contagious as the flu." But that’s a slight understatement. Flu causes between "three and five million cases of severe illness and between 250,000 and 500,000 deaths" per year, according to the WHO – far more serious illness and death in a single day than SARS has caused in 21 weeks. Far more Americans die of influenza each year during flu season (about 36,000) than have yet been killed by SARS globally. Yet few Americans would die of flu if only they were worried enough to roll up their sleeves for a $15 (or often free) vaccination

SARS is repeatedly referred to as "killer pneumonia," as if pneumonia normally causes just hiccups. Yet 62,000 Americans died of pneumonia in 2001. The media are fascinated by the possibility that this virus came to us from animals, displaying incredible ignorance that so does the flu. SARS stories often invoke the great flu pandemic of 1918-1919, which probably killed 40 million people according to WHO estimates. That’s more than ten times as many people daily – among a global population a third of today’s – as SARS has yet killed.

Even today, malaria and tuberculosis – which like SARS are both essentially localized and yet global – kill perhaps 15,000 people daily.

A far better name for the disease would be "The China Syndrome." Ninety percent of all SARS cases are concentrated in China (including Hong Kong), up from 82 percent on April 1. Of the 153 new cases reported May 6, only six were outside China. Only about 15 percent of the world’s nations have reported even one SARS case.

Why China? Hong Kong’s medical care system has gone to pieces since the communists took over, and China’s hygiene is as bad as its health care. The last time my wife and I went to Shanghai for a week we got our shots and avoided the water, yet as soon as we got back we had three emergency room trips between us. 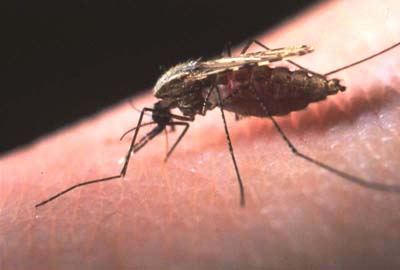 Between them, malaria and TB kill more people in an hour than the world has lost thus far to SARS.

Is Asia in general a SARS hotbed?

The April 26 Los Angeles Times reported, "SARS continued to spread across Asia on Friday," and a Bangkok-based paper reported on April 19, "The SARS virus has now hit nearly every country in Asia, spreading fear, panic, and economic chaos in its wake." Yet more than half of East Asian and Southeast Asian nations report no SARS cases.

Japan was last reported with two cases and no deaths, while India is listed as having one case and no deaths.

How contagious is the disease in countries with good hygiene and health care?

On April 1, Europe had 21 SARS cases; on May 6 it had 36. Only one of these was transmitted locally, with the other patients infected in Asia. Indeed, of the 29 countries outside of China reporting SARS cases, merely four have reported local transmission. Moreover, the WHO now says that aside from China the worldwide infection rate is decreasing. For example, Vietnam has a relatively high number of cases, 63, but hasn’t reported a new one since April 14.

How lethal is SARS?

Globally, it’s about seven percent, in the same league as other forms of pneumonia. This is notwithstanding the May 1 Washington Post reporting that WHO official Mark Salter said it was 10 percent. A CNN.com article that day was titled: "SARS Death Rate Rising," but it had Salter saying it "could likely reach 10 percent." "Could" and "is" are not the same.

CNN paraphrased Salter’s explanation that "the disease is still in its early stages" and "it was normal for death rates to increase in such circumstances." But the opposite is true. With relatively unknown illnesses, death rates tend to drop as hospitals become more adept at treating symptoms. Is it coincidence that while the death rate is about seven percent in China, there have been no fatalities from 101 cases in Europe and the U.S? Not that this stopped the Post from reporting, "Surprisingly, the highest death rates appear to be occurring in the most advanced parts of the world." Surprising, indeed!

Canada is admittedly a strange exception to the rule, yet there as everywhere the disease is gnat on an elephant’s butt compared to flu, and Canada has reported only six new cases in the past ten days. This may also rightly put the last nail in the coffin of the idea that Canada has a wonderful health care system that the U.S. should emulate.

Could the virus mutate to become more lethal? Usually it’s the other way around, as natural selection favors strains that are less lethal and thus likelier to survive indefinitely in the host.

Even in Asia, most countries have reported no SARS cases.

Yet much of the talk of economic gloom and doom may well be true, if only because perception prevails over reality. Airline industries around the world have been struck yet another powerful blow, as has the entire travel and tourism industry and the Asian manufacturing sector.

The World Bank revised its East Asian growth downward by almost ten percent, in part due to the SARS impact on tourism and other face-to-face sectors such as business travel, transportation and retail. Stock markets are being slammed, with Hong Kong plummeting to their lowest levels in four years. The SARS outbreak could cost Canada’s economy up to $2.1 billion in lost growth this year, according to a major Toronto bank forecast.

Nor is it just markets; human beings are feeling the impact right now. Persons of Chinese origin are being discriminated against in various countries, with Chinatowns becoming ghost towns. "The impact could be devastating" for Asian migrant workers, according to a top U.N. demographer. A foreign tourist was held in involuntary quarantine in New York City for virtually his ten-day vacation because he had a fever and ubiquitous "flu-like symptoms," while U.C. Berkeley has barred summer session students from China and other regions of Asia with relatively high numbers of SARS cases. Would they do so for the far-more-contagious and equally lethal flu?

A bit of fear can be useful in controlling an epidemic. But that applies to rational fear, not hysteria. Did people’s refusal to sit near AIDS patients slow that epidemic? Will refusing to sit next to a Canadian of Asian descent slow the spread of SARS?

This global hysteria has no upside. As Shorter says, even as it appears in most places the disease is being contained, "What hasn’t been contained is the mass psychosis surrounding it. It’s entirely the working of the media; this need never have happened." In fairness though, public health officials have also contributed.

Roosevelt’s assertion in 1933 "that the only thing we have to fear is fear itself" was certainly an overgeneralization; but it has never been more applicable than during the SARS hysteria.