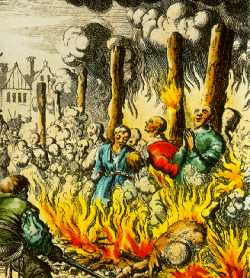 Witch hunting is back and hotter than ever!

Oh, no! Yet another writer has been swept up in a "pay-for-play" scandal, and again, a right-of-center one. "A Columnist Backed by Monsanto," declared the headline of a Business Week "news analysis."

But I knew this was a hit piece packed with more falsehoods than the New York sewer system has rats – because The Bad Guy was me. The witch hunt has been ongoing, but my eventual involvement began when Doug Bandow lost his column after acknowledging to Business Week that he’d written pieces for pay for notorious lobbyist Jack Abramoff. Bandow was long a critic of environmental activists, and when he went down a light bulb lit up over their heads.

They realized they might eliminate more of their critics by simply accusing them of being paid corporate shills, and then siccing the media on them to see what they could dig up. They assembled an "enemies list," giving it to reporters at publications including the New York Times and Business Week. I have locked horns with green groups for the past 15 years and earned a spot on that list.

I was first called by a Times reporter in late December, who accused me of writing a pay-for-play column. I flatly and truthfully denied it. The reporter was flummoxed, having nothing more than an accusation to work with. She kept digging but found nothing.

Weeks later, Eamon Javers of Business Week called and asked about the same column. Again a denial. But by this time my most recent column concerned the exciting biotech products under development by the Monsanto Company, based on a just-released report. Javers asked if I had EVER received money from Monsanto. Sure, I said. It was a $60,000 book grant to my employer, solicited back in 1999, which was applied to pre-established salary and benefits.

Javers then asked if I had acknowledged Monsanto in the book. No, I said. I had called numerous scientists who had helped me to ask how they would like to be acknowledged and one at Monsanto said he’d prefer that both he and the company be left out.

I could have ignored his wishes. But notwithstanding that I live in the backstabbing capital of the world, I kept my knife sheathed. Monsanto had helped me where others would not. I simply referred in my acknowledgments to "others who wish to remain anonymous." Further, acknowledgments are not full disclosure forms; they are personal. Read some. 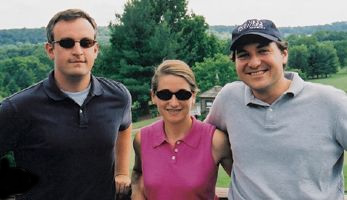 Eamon Javers (left) at the famous Bretton Woods golf course, in an event sponsored by Patton Boggs, Trammell Crow Company, Hisaoka Public Relations, and others. Should he have been playing with companies whose clients he could well be writing about? Were it anyone else, Javers would declare this a clear conflict of interest.

Javers then took it upon himself to establish, right then, a completely new set of rules regarding columnists disclosure of the receipt of corporate money. All previous standards were null and void.

Under Javers’ Rules, there’s absolutely no distinction from a book grants to an employer and pay-for-play for individual columns. Further, once you’ve benefited from a grant you are considered forever in the donor’s debt. Never mind that shortly after received the grant I ripped Monsanto for being "chicken-hearted" and caving into environmentalist demands. Therefore the grant must also be disclosed unto eternity – 2006, 2016, 2036, whatever.

This is shown in the very title of Javers’ piece. While my grant ended in 2000 and my column began in 2003, I remain forever "A Columnist Backed by Monsanto."

Javers’ Rules also declare that any mention of the donor corporation triggers the rules, including a column I wrote devoting a single sentence to Monsanto. And – very importantly – Javers’ Rules are retroactive. Your inability to foresee that one day he would invent them is no excuse.

Javers then called my syndicate, Scripps Howard New Service and, discretion being the better part of valor as they say, I was fired. Instantly. No consultation. Intrinsic to witch hunts and the fear they generate is that an accusation is a conviction. Javers accused; Scripps fired.

I’d have hoped that it would’ve meant something to the Scripps folks that they’d never paid me for the over 100 columns I wrote for them. Or that I was their only investigative columnist. Or that I’d traveled to Iraq at my own expense to report events firsthand, rather than pontificate from an air-conditioned office, and that I came back permanently maimed as a result of hostile conditions and the rigors of war.

If all this sounds insane, remember there really was a time when harmless old biddies went up in flames simply because a neighbor wanted their land or livestock. But I’m no ash heap. The environmentalists THINK they’ve shut me up. Wrong. I have not yet begun to write.