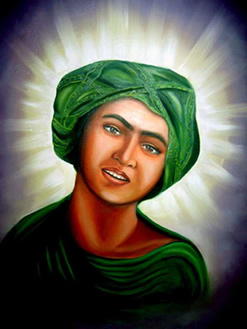 Sure, it’s a bit on the cheesy side, but it’s Mohammed and was painted by a Muslim woman living in Iran (Yes, that Iran) who sells her work online.

Just as the controversy over the Danish newspaper cartoons of Mohammed seems to be waning overseas, it’s heating up here. The first newspaper I ever wrote for, the Daily Illini at the University of Illinois (Urbana-Champaign), has made a big spread in the New York Times. And not for winning a Pulitzer. No, it printed six of the cartoons, leading to the suspension of both the editor-in-chief and the opinions page editor.

Unfortunately Acton Gorton, 25, the suspended editor-in-chief (who may have also violated accepted D.I. procedures in his zeal to print the cartoons), didn’t present the best defense. "We did this to raise a healthy dialogue about an important issue that is in the news and so that people would learn more about Islam," he told the Times.

No, Mr. Gordon, you didn’t educate people about Islam and you didn’t intend to. Your purpose was (or should have been) to show that Americans are not about to suddenly toss away a two-century tradition of free speech. You ran the cartoons because you knew people didn’t want you to; don’t wimp out now.

The real wimp is University Chancellor Richard Herman, who sent a letter to the D.I that read in part, "I believe that the D.I. could have engaged its readers in legitimate debate about the issues surrounding the cartoons’ publication in Denmark without publishing them. It is possible, for instance, to editorialize about pornography without publishing pornographic pictures."

Really? Dollars to doughnuts Herman wouldn’t have said the same about the images of abuse from Abu Ghraib. Imagine if the print media had simply described "a man wearing a hood standing on a box with wires taped to his fingers." Loses something in the translation, doesn’t it?

Some Muslims have rightly accused European countries of hypocrisy because they allowed the cartoons but have laws against denying the Holocaust in print. But over here being offensive is 100% legal and thank heaven for it, because the alternative is somebody deciding what is and isn’t. 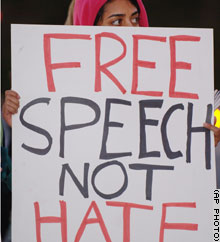 Sorry, but you can’t have free speech unless you allow people to say what others believe to be hateful, stupid, or insensitive.

Ah, but portraying Mohammed goes beyond insulting; it’s utter blasphemy to Muslims, right? So say numerous news stories. But not only should blasphemy still be protected speech, the very assertion is wrong. Depictions of Mohammed are forbidden by neither the Koran nor Islamic law. The Muslim art world overflows with prophet portraits. You’ll find a huge collection at the website www.zombietime.com.

So we’re left with why Shaz Kaiseruddin, a third-year law student at the University of Illinois and president of the Muslim Student Association, objected to the printing of the cartoons. She said it was enough that the D.I. was "so ignorant and disrespectful."