Pop quiz. For its November annual meeting, the American Public Health Association (APHA) chose as its keynote speaker: A) a top government health official; B) a Nobel Laureate scientist; or C) an activist and shark assistant who’s 20 percent silicone and 80 percent hot air. The answer, demonstrating that the APHA has concerns beyond public health, was "C" – paralegal Erin Brockovich. According to the APHA, Brockovich discussed "her research and groundbreaking work in the area of industrial environmental negligence, its devastating effects on the public’s health, and her continued pursuit for justice for those who have been harmed."

In fact, as I have been writing for four years, Enhanced Erin pursues only that which leads to fame or fortune. Thus in the Hinkley, California lawsuit (falsely represented in her eponymous film) that made her both celebrated and rich, there was never evidence of any excess illness.

Now her firm is suing Beverly Hills High School and practically every oil company in existence, claiming fumes from a campus oil rig has given former students cancer.

"These statistics are 20 times higher than the national average for these specific cancers," Brockovich told a credulous media. But a University of Southern California study found no abnormal cancer rate and only a contempt of court threat forced the firm to admit the "20 times" figure was fabricated. 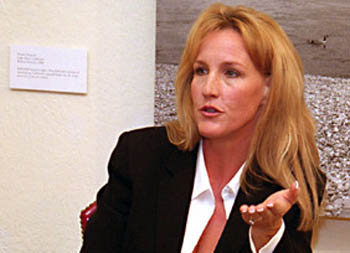 "I know lots about filthy insects! Remember, I work with trial lawyers."

None of which matters to the APHA, since it’s not keen on truth either; what counts is attacking corporate America. One major target at the meeting was those who make pesticides. Among the sessions: * "Healthy Hospitals: Controlling Pests without Harmful Pesticides," based on false "facts" from the extremist groups Health Care Without Harm and Beyond Pesticides.

But Kevin Marchman, executive director of the National Organization of African Americans in Housing (NOAAH) knows pesticides used in the U.S. are safe and that foods grown with them should be chewed – not eschewed. He said so in letters to both the APHA and the Congressional Black Caucus.

"While I’m sure Erin Brockovich is an expert in these areas," he told me sardonically, "we don’t need the APHA to highlight activists who focus on issues of little importance to average Americans."

The NOAAH letters specifically noted APHA presentations that "focus on the ’wisdom’ of avoiding pesticides by eating only organically-grown food and encouraging pesticide-free methods to control cockroach allergens [a.k.a., bug poop] from contributing to children’s asthma attacks."

Organic food is fine for these people – but not for inner-city families who need quality food at low prices.

Marchman says that while the "APHA appears to be trying to scare people into eating" organic food, it’s hard for inner-city families to find it – much less pay for it. Conversely, "Conventionally-grown fruits and vegetables are abundant, safe and economical."

Organic food is meant for Birkenstock-wearing, loft-living yuppies who need to show the world they can afford to pay extra for produce that’s often inferior. But for low-income families who already eat too much processed food and too few fruits and veggies, "The ’buy organic’ approach is sure to contribute to the fast-growing and real concern of obesity, especially in our children,"says Marchman.

As to cockroaches, black children have as much as six times the rate of asthma deaths as white kids. One major study found that over a third of inner-city children were allergic to roach droppings, yet over half of their bedrooms "high levels" of cockroach allergens. And guess what? You don’t kill cockroaches with kindness; it takes chemicals. "Because we do a lot of work with public housing agencies we know that pests, and particularly cockroaches, are a huge issue" says Marchman.

With its chemical-bashing obsession , the American Public Health Association has made itself a pest. Certainly it is an association, but at the meeting it hardly lived up to its name. For its speaker it got a D-cup; for concern over American public health it gets an F.