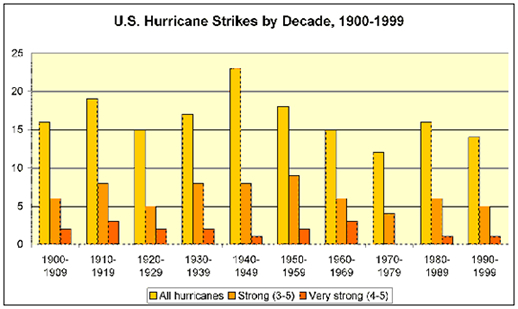 "The hurricane that struck Louisiana yesterday was nicknamed Katrina by the National Weather Service. Its real name was global warming." So wrote environmental activist Ross Gelbspan in a Boston Globe op-ed that one commentator aptly described as "almost giddy." The green group Friends of the Earth linked Katrina to global warming, as did Germany’s Green Party Environment Minister.

Time for an ice-water bath, hotheads. If you’d bothered to consult the scientists (remember them?) you’d find they’ve extensively studied the issue and found no evidence that global warming – assuming it’s actually occurring – is causing either an increase in frequency or intensity of hurricanes.

Thus the Intergovernmental Panel on Climate Change, which believes global warming is both real and man-made, stated in its last assessment (2001) that "Changes in tropical and extra-tropical storm intensity and frequency are dominated by [variations within and between decades], with no significant trends over the twentieth century evident."

So, too, states the Tropical Meteorological Project at Colorado State University. In a paper issued AFTER Katrina hit it noted hurricane activity since 1995 has "been similar" to that "of the mid-1920s to the mid-1960s when many more major hurricanes struck the U.S. East Coast and Florida." These are the people, chiefly professor of atmospheric science William Gray, who issue the annual hurricane forecasts each May.

In the wake of Katrina, Gray explained to the New York Times that what might appear to be a recent onslaught "is very much natural." Until recently we were lucky, said Gray. Then, "The luck just ran out."

Roger Pielke Jr., director of the University of Colorado’s Center for Science and Technology Policy Research, agrees. In a forthcoming paper in the Bulletin of the American Meteorological Society he analyzes the damage caused by hurricanes that have hit the U.S. since 1900. Taking into account tremendous population growth along coastlines he finds no trend of increasing damage from hurricanes.

"I don’t think you could find any hurricane scientist that would be willing to make the statement that the hurricanes of last year or Katrina are caused by global warming," he told Denver’s Rocky Mountain News.

As you might guess neither Gelbspan nor RFK Jr. are scientists; they’re professional scaremongers. Having authored two books on the forthcoming catastrophe of global warming, Gelbspan’s fortunes are as tied to this issue as GM’s are to vehicles. 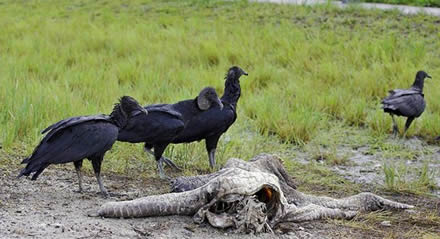 Environmental blowhard buzzards are feeding off the Katrina tragedy.

Nevertheless, MIT climatologist Kerry Emanuel is a scientist and stirred up a Category Five controversy with his recent letter in Nature claiming there’s no trend in the frequency of hurricanes but "future warming may lead to an upward trend in tropical cyclone [hurricane] destructive potential."

William Gray, however, told the Boston Globe "It’s a terrible paper, one of the worst I’ve ever looked at." According to the Globe, "He was appalled that Emanuel would take such shaky data on wind speeds, then feed them into a formula that puts such heavy weight on those numbers." Such a method, he said, can produce any result you want.

Yet even Emanuel stops short of blaming Katrina or other recent hurricane strikes on global warming. "What we see in the Atlantic is mostly the natural swing," he told the Times. That hardly supports the overheated rhetoric of those exploiting his Nature letter.

Bear in mind, too, that the effects of global warming are supposed to be, well, global. If cyclones are more intense or frequent off U.S. shores, they should also be so elsewhere as in the east Pacific, west Pacific, and Indian Ocean. "This has not occurred," a June 2005 report from the Tropical Meteorological Project stated flatly. "When tropical cyclones worldwide are summed, there has actually been a slight decrease since 1995."

This isn’t to say alleged warming is actually moderating these awesome storms. But certainly it’s having no moderating effect on the blowhard buzzards ripping chunks off the Katrina disaster to promote their own dubious agendas.