Terrorist-infested Ramadi in Iraq’s western Anbar Province isn’t exactly journalist-friendly. Labeled "the graveyard of the Americans" in local graffiti, a stay of even a few days means you’ll be mortared and if join a patrol you’ll probably be shot at. The place has more buried IEDs than Sutter’s Mill had gold nuggets. Your standard of living will also suffer considerably compared to the Baghdad hotels the American press corps favors. Recently a photographer embedded at Camp Corregidor, where I also stayed, was nailed by a sniper in both legs and the soldier who pulled him to safety was also shot. Two shattered limbs can ruin your whole day.

The upshot is that not much news comes out of this city, notwithstanding its importance to the war effort and the constant fighting. Moms, dads, wives, and siblings are all heavily dependent on what their soldier boys email them or tell them by phone, as I found after I spent some time there with the new ”Band of Brothers” (1st Battalion, 506th Infantry Regiment, 101st Airborne Division) and reported on it at the time with blogs, photos, and later with an article in the Weekly Standard. 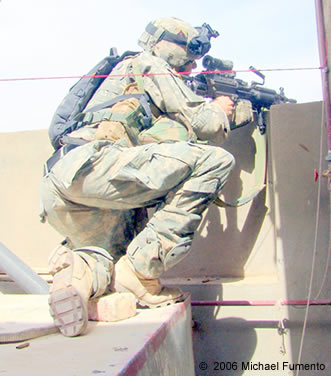 Spc. Robert Killion of A Co, 1/506th, having just shrugged off a near miss by a sniper, takes out an insurgent on the ground.

Loved ones of the GIs continue to send me emails profusely thanking me for showing them and telling them about a place that was so important in their lives and yet was almost invisible to them, notwithstanding that what I told them was not only that which would horrify most people but specifically horrified them!

”Thank you so much for the excellent pictures of Ramadi,” wrote Landon. (For privacy reasons, I’m using only first names.) ”My son is in Camp Corregidor and these are the first really decent pictures of the area I have seen. It at least gives me an idea of what it is like. He doesn’t say much about the conditions so I have to prowl the internet to find what I can. He doesn’t want his mom and dad to worry more than we have to.”

Elissa thanked me for my ”wonderful articles from Ramadi, Iraq!” Wonderful? But she had her reasons. ”It’s hard to talk [to my husband] on the phone and not be able to know what he is doing or what all is happening,” she told me. ”It always makes me feel better when I know what’s happened even if it is not good news or [even] somewhat scary news.

So ”No news is bad news.” Ignorance is anything but bliss. Repeatedly I found troops were trying to spare loved ones who didn’t want to be spared. Carolyn wrote, ”It is hard not knowing what our children are going through. As a mother I don’t want to know what Trent is dealing with. But as a mother I need to know.” Another mom: ”[My son]can not say what he does. All I get is ’I am good’ but he sounds tired. You gave me some insight into his life.” It was signed, ”Scared mom of Spc. [omitted].”

Yet another, Marilyn, told me, ”The rare conversations we share via Instant Messaging are more about what’s going on at home. He lets on that he is weary, but does not complain . . . just wants to get the job done. Some seasoned military parents told us not to listen to or read the news but I cannot keep my head in the sand. It is easier to know than not.”

Ann-Jean wrote, ”I am one of those wives who craves to hear the news, no matter if it’s good or bad. My husband has actually been very forthcoming with the stories, even graphically at times, but I know he doesn’t tell me everything. Thanks again.”

Kristen, whose man had recently departed Corregidor, said she ”couldn’t figure out why if it was so dangerous” [in Ramadi], where was the news? Rarely did you ever hear Ramadi mentioned, yet I knew the danger that was there. My husband said the same as you — reporters were too afraid to be there.” But, ”We made a pact when he got there to always tell me everything. I appreciated it. I could sleep at night because I knew what he was doing and going through. I could never have gone through that in the dark like so many others.”

Deb wrote, ”I read your blog regarding your activities in Iraq.”

Had my son [name omitted] seen it first, I would never have seen it because he likes to protect his family from what is happening over there. His wife, after not hearing from him for over a week, was worried and signed onto his email account, hoping to see he had been online. Instead she found your unopened blog and read it before he did. In turn, she sent it to me, specifying that it was graphic and I might not want to read it, but that she had been very proud of him. I was very proud reading the words you had written about him and other soldiers who are serving in that area. It was also difficult to see in black and white that my son is at risk and putting himself out there when it is necessary. It is not surprising as I know my son, but reading it was different than suspecting what is happening. 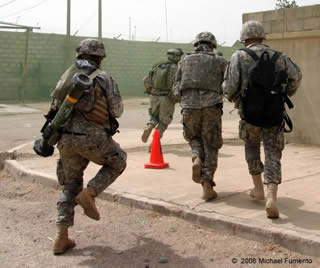 With machine-gun and AK bullets dancing around, these men are flying more than running.

Yes, Deb’s daughter-in-law had to sign onto her husband’s email account just to see if he was safe! Laura asked me to intercede for a brother who won’t contact her as often as she feels she needs, although she had just gotten an email from him. She asked me: ”If you could send me a quick email if you remember [seeing] him telling me he’s okay, that would be great!” As it happens, I had already left.

Bear in mind, it’s not just a personal need for news that drives these poor folks. ”As a mother, I need to know what he’s going through,” Cherie told me. ”It’s not to torment myself but to better prepare for his state of mind when he returns.” Smart lady. You can’t go to a place like Corregidor for a year or even far less and not be altered by it. At least, not if you arrived sane.

But speaking of tormenting, I’ve also been cc’d on a couple of emails displaying false bravado and suffering and those are probably worse than not writing at all. One told his folks of how a buddy took a shot in the chest and only his courage and quick-thinking saved him. The incident never occurred. Another complained of going on 8-day patrols with a single meal a day. Sorry, but long-range patrols are run out of Camp Ramadi. The soldiers in Corregidor have very specific areas of operation, which can be trotted across in probably less than an hour. The real problem comes with the ”meal-a-day” mention. The guy’s father calls a reporter and next thing you know Hillary Clinton will be calling congressional hearings on how Dick Cheney and Don Rumsfeld are starving our boys.

In fairness there aren’t that many working terminals at the Camp Corregidor Internet center and as I recall only about five phones for perhaps around 500 men. That said, I found I could get on a terminal in 15 minutes and there were spare phones at the time. Further, they still make these contraptions called ”pens” and ”paper.” Nothing electronic will ever replace the comfort of a real, honest-to-goodness handwritten letter — especially if you yourself never make it home. 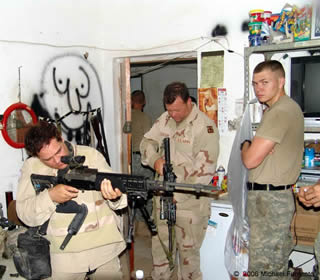 And while you’re writing, send or upload a few photos. True, Corregidor has no PX in which to buy a camera but your buddy’s will do just fine or your relatives will be glad to send one. That would prevent such sad emails as this one I got from Jennifer. ”By the way, in the picture of you with the M-14 rifle in the room, my husband’s fingers are at the right. That picture was taken in my husband’s squad’s room. He doesn’t like to take pictures, so it was so nice to see his fingers.” His fingers? ”How dumb!” I wrote back to her. ”How romantic!”

While you are deployed is not the time to be camera shy. You’ve probably lost some weight. You might look a bit haggard. Constant firefights, sniping, and mortar attacks can do that to a guy notwithstanding that he’s receiving a steady supply of Girl Scout cookies. But your folks want to see you anyway.

I’ve focused on Ramadi and Camp Corregidor because that’s where I was and hence was the subject of most letters sent to me. But so long as our brave, bold media continue to think they can cover the war from rooms in the Al Rashid and Baghdad Sheraton, most of Iraq will be a black hole of news. Even the soldiers in Baghdad tend to be ignored in favor of a reporter’s 100th story on a car bomb explosion. So wherever you are in Iraq and in Afghanistan, get to a terminal, get to a phone, or grab some stationery and perform your duty to that part of the country which supports you the most. Don’t leave it up to an embedded reporter who may never arrive to digitally send home your digits and to keep your people in the loop. What they don’t know is hurting them.