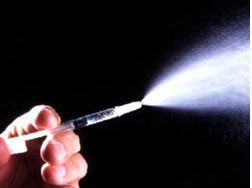 It costs more and isn’t yet approved for the elderly, but if you’re afraid of needles FluMist is for you.

Most nursery rhymes may say little to us about history and present dangers. But this one, dating back to the horrific flu pandemic of 1918-1919, reminds us that influenza is highly infectious and can fly across the country with the speed of a bird.

It’s a reminder to get vaccinated against a preventable disease that reaps over 35,000 American lives a year.

By contrast, AIDS killed about 15,500 American in 2001 and thankfully those numbers keep dropping. The dreaded SARS virus killed, um, let see ... no Americans.

Further, between 28 and 56 million Americans will contract flu this year, while over 100,000 will be hospitalized.

What’s saddest is that while vaccines for AIDS and SARS are years away, we have a highly effective one for flu that’s cheap (often free) and available everywhere from workplaces to grocery stores. Yet fewer than a third of Americans get vaccinated, including many of those at highest risk for severe illness and death.

Why? One explanation is that relatively new illnesses get a lot more media play than do old ones; hence we tend to overrate their risk. That explains this year’s SARS hysteria and the AIDS panic that prevails somewhat to this day.

But here are some flu myths and misconceptions that may also be getting in the way: * Flu shots can give you the flu. Wrong. "The viruses in the vaccination are killed; it’s simply not possible to get influenza from it," explains Dr. Keiji Fukuda, chief of the Epidemiology Section, Influenza Branch, at the Centers for Disease Control and Prevention.

The vaccinations contain thimerosal, which causes autism. Thimerosal is a preservative used in vaccines since 1931. A mass of research, including a study of all children born during a six-year period in Denmark that appeared in the October 1, 2003 issue of the Journal of the American Medical Association, has found no thimerosal-autism link. The myth-mongering groups whose thimerosal propaganda pollutes the Internet (and who will now swamp me with nasty e-mails) actually oppose all childhood vaccinations. That said, the fears have prompted the production of low- and no-thimerosal vaccinations.