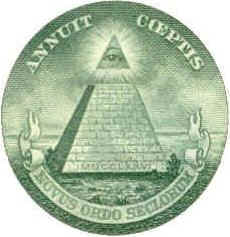 Did the guys represented by this eyeball on the dollar bill conspire to fabricate the flu?

Did you know that the government’s claim that fluannually kills 36,000 Americans is "a crock, a lie, and a sham; a conspiracy to generate fear and stampede people to use a vaccine of questionable effectiveness to the benefit of pro-immunization bureaucrats, and big pharma?" So wrote John Keller in a recent column at the highly-trafficked LewRockwell.com website, over which other vaccine-conspiracy websites and some bloggers are going wild.

Keller, whose self-provided credentials are that he owns a Technology Consulting and a Real Estate business, insists there’s no need to fuss over the huge vaccine shortage because "The vaccine doesn’t work, and the flu is a flim-flam!"

Big Pharma, eh? If flu vaccine were liquid gold to drug companies, how did things get so bad that the Centers for Disease Control and Prevention found they only had two flu vaccine makers to choose from this year? We had 26 companies developing and manufacturing vaccines in the 1950s. But high risks (look at what happened to Chiron Corp.), slim profit margins, high prices courtesy of trial lawyers, and overzealous FDA regulation have combined to make manufacturing flu vaccine almost a fool’s errand.

Nonetheless, Conspiracy Keller claims that "according to the CDC’s own numbers" total "flu deaths for 2002 [were] 753." What he conveniently omits is that as with AIDS and cancer, virtually nobody dies of the disease itself but rather of complications caused by it.

People with AIDS usually eventually succumb to opportunistic infections, but those persnickety coroners and medical examiners still insist on putting something like "toxoplasmosis due to HIV infection" on the death certificate, and the CDC reports it as an AIDS death. Cancer victims generally fall prey to pneumonia or organ failure, so we might be able to reduce over 500,000 yearly cancer deaths to about 753 as well.

Let’s make vehicular fatalities disappear, too. The victim wasn’t killed by a car, but rather a crushed skull and massive internal bleeding. Or drop the gore and simply say, "Cause of death was massive impact with plastic and sheet metal."

Likewise, with flu the proximate cause of death is usually pneumonia. The same dataset Keller used to come up with his fantastically low flu-death figure also has an "influenza and pneumonia" category that lists over 65,000 deaths. That is where most of those 36,000 flu deaths are to be found, although they may also be in other categories such as "disease of the heart" if the victim ultimately succumbed to coronary failure.

Indeed, a 2003 study published in the Journal of the American Medical Association showed exactly how the CDC came up with its numbers and found 36,155 "underlying respiratory and circulatory deaths" from flu.

Incidentally, since the coughing, sneezing, and aches associated with flu are actually caused by immune-system reaction rather than the virus itself, you could also argue that nobody even suffers from the flu. Boy, have those government and Big Pharma conspirators pulled one over on us!

Keller also asks how we can be averaging 36,000 flu deaths in normal years when two of the three pandemics of the 20th century "killed close to what the CDC is now calling average."

First, he’s ignoring population growth. The 34,000 deaths of the 1968-1969 "Hong Kong flu" pandemic would translate into 47,600 today. That’s not a huge difference, but that was also the mildest flu pandemic of the 20th century. 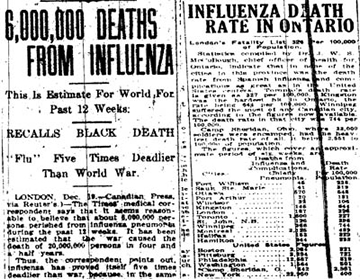 None of these people actually died of the flu. They all just had really bad colds.

Further, "pandemic" is often wrongly interpreted to mean "a severe epidemic," but it actually refers not to numbers but geography. A pandemic is essentially worldwide. With flu, it also has a special association with what’s called an antigenic "shift" in the virus strain versus the usual "drift." Theoretically, a flu pandemic could kill fewer Americans in a given year than is normal.

Keller’s figures on vaccine efficacy are similarly worthless. Relying on a single line from a CDC PowerPoint presentation, he claims "the CDC’s own studies show they believe the flu vaccine to be only 16%-63% effective against the flu."

Is that why the CDC’s Morbidity and Mortality Weekly Report stated just two months ago that, "The effectiveness of the inactivated influenza vaccine against laboratory-confirmed illness among healthy adults aged [less than] 65 years is expected to be 70%-90%" when health authorities have chosen the proper strain for that year’s inoculation.

Unfortunately, since vaccines work by stimulating the immune system, those with weaker systems—including the elderly—are less protected. Nevertheless, a 2003 New England Journal of Medicine study of about 300,000 Americans age 65 or over found the flu shot cut their death rate in half, even though those who took the vaccine were initially sicker than those who didn’t. That’s nothing to sneeze at, especially when you consider that the new malaria vaccine that everybody is (rightly) celebrating fully protects only 30 percent of recipients.

Ultimately Keller stops even pretending he has supporting data when he claims flu shots also may cause autism, Alzheimer’s and even Attention Deficit Hyperactivity Disorder (ADHD). But no doubt medically ignorant readers will have already been taken in by the earlier pseudo-science.

This year it doesn’t matter, because whatever extra vaccine is obtained will be snapped up instantly. But that which is posted on the web stays forever, and can stay influential forever when so many websites have linked to it. To the extent people are influenced to avoid the flu vaccine when it’s available in subsequent years, Keller’s column could be a killer.