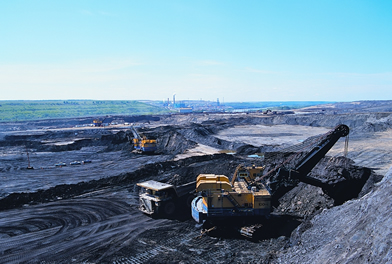 It was a tenet of the late great economist Julian Simon that we’ll never run out of any commodity. That’s because before we do the increasing scarcity of that resource will drive up the price and force us to adopt alternatives. For example, as firewood grew scarce people turned to coal, and as the whale oil supply dwindled ’twas petroleum that saved the whales.

Now we’re told we’re running out of petroleum. The "proof" is the high prices at the pump. In fact, oil cost about 50% more per barrel in 1979-80 than now when adjusted for inflation. Yet it’s also true that industrializing nations like China and India are making serious demands on the world’s ability to provide oil and are driving prices up. So is this the beginning of the end?

The evidence is in something called oil sands (also called tar sands), a gooey substance that can be surface mined as coal often is. The oil is then separated from the dirt using energy from oil or natural gas extracted from the site itself to produce a thick liquid called bitumen. It’s then chemically split to produce crude as light as from a well head.

Oil sands in a single Venezuelan deposit contain an estimated 1.8 trillion barrels of petroleum, with 1.7 trillion in a single Canadian deposit. In all, about 70 countries (including the U.S.), have oil sand deposits although technology hasn’t yet made them economical for exploitation. Of Canada’s reserves alone, over 300 billion barrels (more than the entire proved oil reserves of Saudi Arabia) is currently considered recoverable. And recovering it they are.

It appears the mining of oily sand and its conversion to petroleum began in 1735 in France, but presumably the expense of the process and the discovery of easily-recoverable oil led to its abandonment.

Alberta’s oil sands deposits alone are about the size of New York State.

The Canadians got in the game when Suncor Energy produced the first barrel of crude from oily sand back in 1967. The joint Canadian-U.S. venture Syncrude has been doing so since 1978 and now supplies over 13% of Canada’s oil needs. Oil sands as a whole provide over a third of the nation’s needs, with almost all of the rest going to the U.S. Between pumped oil and oil from sands, Canada is our largest supplier of crude and refined petroleum.

It almost makes up for their inflicting William Shatner on us, eh?

Suncor’s success can be measured by stock prices that have increased an incredible 400% in the past five years compared to a flat-lined Dow and a dropping Nasdaq and S&P 500.

Yet business is booming now more than ever. Suncor has just finished expanding production capacity from 225,000 barrels per day to 260,000 and plans to reach 350,000 barrels daily by 2008. On the whole, the industry expects production to triple by 2020. Thus while mature oil wells produce less each year, oil sands companies can keep producing more – a rather happy trend.

Driving such expansion is the obvious – sustained high prices of petroleum – as well as continually improving technology that keeps making it cheaper to both mine and convert oil sands.

Syncrude spent only $15.27 (U.S.) last year in total production costs to produce a single barrel of its low-sulphur "Syncrude Sweet Blend." Suncor calculates that in 2004 it spent $9.81, although spokesmen for both companies confirmed they use different accounting methods to arrive at their figures. In any case, current petroleum prices of about $60 a barrel hardly need to be sustained for Canadian companies to continue to squeeze liquid gold out of their lands with plenty of money to expand operations.

We’ve only scratched the surface in terms of discovering and exploiting oil sand deposits, along with deposits of oil-containing rocks called oil shale. Still the amount, however huge, is necessarily finite. By one estimate, we may only have about more 500 years of energy from oils sands at current usage rates.

Just five centuries till the spigot runs dry! Where are the doomsayers when you need them?