You wouldn’t confuse it with Manhattan, but Fallujah is getting back to business. This Marine is just playing it safe. (Photo by Michael Fumento)

Fallujah, Iraq – Critics of the attack on Fallujah last November often invoked the damning (and mythical) utterance from Vietnam: "We had to destroy the village to save it." Never mind that the alternative to the massive assault on the city backed by artillery, tanks, and aircraft would either be a huge loss of American lives or simply allowing the al-Qaida cut-throat al-Zarqawi to keep it as the terrorist headquarters for all of Iraq. Forget that the city was already crumbling from the neglect of Saddam Hussein’s regime. Today Fallujah is on the mend and then some, a symbol of renewal and American-Iraqi cooperation.

Although the area is still "red" – meaning hostile – as is all of the predominantly Sunni Anbar province, the 2nd Marine Expeditionary Force is extending power lines and laying water and sewage pipes at a steady pace. Rubble and explosive ordinance – some left over from the fighting and some freshly laid by the insurgents – is being removed. Schoolhouses and hospitals are being fixed and erected. As a bonus, military-age males (known by the abbreviation "MAM") are receiving good wages to build things instead of blowing up people.

As I traveled through the slowly repopulating city – about half of the original 250,000 are believed to have returned – I saw awesome scenes of destruction. But I also saw thriving markets, stores selling candy and ice cream, and scores of children delighted to see Americans. I did more waving than the beauty queen in the 4th of July parade and the kids squealed with delight when I took their picture – or pretended to.

Williams and the 5th CAG is in charge of rebuilding the city in conjunction with the Army Corps of Engineers. He shows the value of drawing on a rich pool of reservists in that prior to be being called up he worked for General Electric, installing new power plants throughout the U.S.

Restoring and expanding access to electricity is top priority here, more so than access to running water because Iraqis pump water up from the mains to tanks on their roof. No electricity, no working pumps.

Williams and his counterpart at the Corp of Engineers, Maj. Daniel Hibner, don’t have the simple goal of restoring pre-war Iraq. "The baseline is crappy so why go back to that?" says Williams. "We did do some damage but the repairs are taking these people far beyond where they were."

The goals are ambitious but they’re being met. All of Fallujah is scheduled to have electricity by January 2006. The Marines have the responsibility for bringing power to the pole, while the Iraqis take it from the pole into homes and shops. 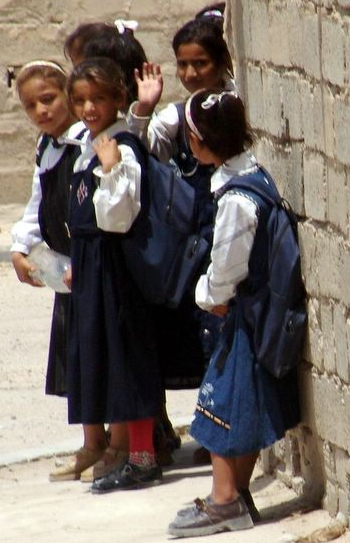 This is what rebuilding Fallujah is all about. (Photo by Michael Fumento)

Progress on bringing drinkable water into homes is even faster. "When we got here, we repaired every potable water system," says Williams. "Every section of the city that had pipelines before has them now." The problem, he says, is that people are squatting near the pipes and knocking holes in them to get water. Thus the further you are from the source, the Euphrates River, the less pressure in the mains until it becomes a trickle.

To fix that, two storage tanks are being built about halfway along the pipelines. These will bring water out to the farthest houses. The second of the tanks will be finished by November says Williams.

Drainage is extremely important in Fallujah because the city is lower than the Euphrates. Flooding during the upcoming rainy season would be inevitable, save that eight pumping stations will be restored by then. A ninth, pulverized by a large American bomb when insurgents occupied it, will be restored by early next year.

There are already enough schools and hospitals to serve the entire community, but they’re overcrowded and far from ideal. Everything fixable has or is being repaired and new modern facilities are going up.

Iraqis are renowned for their engineering skills; the military encourages them and not only to make better structures. "The idea is that sooner or later they have to do these kinds of projects by themselves," says Hibner.

Do the insurgents interfere with the reconstruction efforts, I asked? They don’t dare," says Williams. "They know if they screw with electricity, water, or sewer systems the people will get angry."

"We’re certainly not trying to turn this into the equivalent of an American city," says Williams. "But it will be first class for an Iraqi one and that’s going to win the hearts and minds of the people." From the smiles, the thumbs up, the waves, and the cries of "Hello!" in Arabic I got from the children in even the worst parts of the city, I’d say they’re being won.