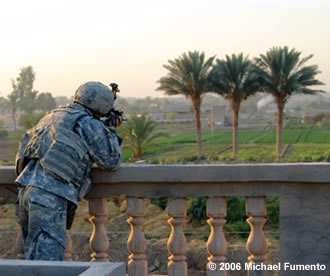 The capital of al Anbar Province, Ramadi remains for U.S. troops the most violent city in Iraq. Yet as I reported in my November 27th ”Return to Ramadi” Weekly Standard article, we seem finally to be gaining ground there against the insurgents and al Qaeda in Iraq. And COPs — Combat Operation Posts — may be one of the most important reasons.

Historically, successful counterinsurgency efforts have involved pacifying areas by plopping small garrisons with interlocking communications into enemy territory and sending out patrols to gather information and engage the enemy. Perhaps the most famous example of such garrison use was that of King Edward I of England (the guy who gutted Braveheart) who used castles to consolidate his hold on Wales. More recently U.S. Army Special Forces established Civilian Irregular Defense Group camps in South Vietnam, manned primarily by indigenous tribes or South Vietnamese with a core of Special Forces soldiers. These were considered one of the most effective strategies of that war.

There’s no set size for a COP, but in the Ramadi area it’s an undersized company of four platoons, or about 80 soldiers. 1st Brigade Combat Team, which overseas Coalition Forces in Ramadi, put in 11 COPs so far and is going to install more. The first in Ramadi was created in June. These garrisons are tiny offshoots from much-larger forward operating bases, which have about 1,000 men. The COP in which I was embedded, COP Anvil in northern Ramadi, comprises just two concrete houses commandeered and leased from Iraqi civilians.

Anvil was commanded by Capt. Don Sapp of A Company, 1/6 Infantry when I was there although he rotated out right after I left. It has an oversized company of more than 120 men from three American platoons and one Iraqi platoon. Anvil also has four M-2 Bradley fighting vehicles attached to it, giving it real firepower. Anvil also draws support from Forward Operating Base Blue Diamond, which in turn draws support from Camp Ramadi.

The military refers to COP use as "the inkblot strategy." One dot spreads into a bigger spot. Further, the troops are practically forced to work with the locals. That means building up networks of indigenous people who know the terrain, culture, and other people better than any forces — even one from the same country but another province — ever could. All of this creates a force multiplier. Since we simply don’t have enough troops in the Anbar, this ability to make better use of troops without weakening the forward operating bases from which they’re drawn is vital. Another value of the Ramadi COPs over the FOBs and Camp Ramadi is that we’re fighting an enemy that relies primarily on roadway bombs — whether IEDs, vehicle-borne IEDs, or suicide-vehicle borne IEDs (driven vehicles) — to inflict casualties and damage, with the potential for greatly restricting movement. But missions from COPs are inherently short-range; you’re always almost there. That’s less road to be on and hence fewer explosives and ambushes to worry about. COPs also have no chance of being overrun both because of the inability of the enemy to fight skillfully or mass in large numbers and because of the multilayered defenses. 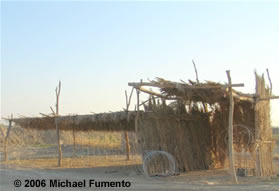 Anvil has concertina barbed wire and HESCO baskets as an inner layer of protection. A HESCO is a huge thick bag in a wire mesh into which sand or dirt can be dumped. Linked together, the bags form an extremely effective blast wall and an impregnable barrier. Sapp took advantage of Anvil’s rural location to cut down vegetation surrounding his two buildings, creating a nice clear-kill zone. Ingress over irrigation canals is controlled with concertina wire in some of the canals and by knocking down numerous foot bridges and replacing them with fewer easily-watched ones.

Two men are always on top of the American-occupied building (the Iraqi army controls the other structure) to survey the countryside, which the clear-kill zones make easy. They have access to an anti-armor rocket, a Mark-19 40 mm automatic grenade launcher, and a .50 caliber M8A1A. One .50 caliber shot into an engine block can stop a vehicle in its tracks. You don’t want to hear what it can do to a human being.

Sapp showed me the impact of the Combat Operation Post system in Ramadi (Fallujah also has some) on a map. The foreign fighters who come into this area do so along the main highway from the Syrian border to the west. It’s a mini-Ho Chi Minh Trail, so to speak. From this road the terrorists used to fan out in the area where the COPs have been inserted. "In the last four months, we’ve kept pushing them right around here," Sapp indicated, with his finger moving in a counter-clockwise pattern.

"Initially we wouldn’t go anywhere in this area with anything less than a platoon and sometimes even armor," he said. "But now I allow them to enter with just squads." The only part of the fan still remaining pushes the enemy against the Euphrates River.

At Anvil almost all missions are on foot and off the trails. That’s part of the beauty of the COP system; you can go almost anywhere you need to stealthily. The night I was there we set off to grab some of bin Laden’s buddies.

The targets were in two houses are about 400 meters away from the COP, and the best avenue of approach would be through a series of irrigation canals and the offshoot ditches. This canal system would prove my undoing. Jumping from little strips of land to other little strips is an acquired skill. You don’t acquire it in one night and I fell into a canal and destroyed my camcorder and voice recorder. It was interesting going out in the sunlight afterwards and seeing how treacherous the terrain really was. "I hate that night s—t," a soldier told me.

But the raid couldn’t have gone better. We struck the jackpot in the form of an al Qaeda intelligence officer whose chief job was assassinating Iraqi police. He was perhaps 22 years old. As soon as the plastic cuffs were on him he faked heart problems and then breathing problems. I guess he thought the soft-hearted Amerikani would just let him go. Tough luck, bad boy. We also grabbed two other potential suspects. We brought them back and put them in an outdoor holding pen. Both later admitted to being al Qaeda fighters.

Three terrorists in one night is a nice haul and it’s vastly better than simply killing them. They will expose others who may in turn expose yet others — with no civilian ”collateral damage.” As with COPs, it’s how the Coalition is taking back Ramadi and restoring hope to its citizens — one little step at a time.