While the Democratic-controlled House voted 253-174 to expand federal funding for embryonic stem-cell research, it fell far short of the 290 votes needed to override a virtually guaranteed presidential veto. A tragedy for victims of everything from Alzheimer’s to warts? Not at all. Each year there are stunning breakthroughs with adult stem cells, and 2007 has already brought its first.

Adult stem cells cure and treat more than 70 diseases and are involved in almost 1,300 human clinical trials. Scientists also keep discovering that adult stem cells are capable of creating a wider variety of mature cells. Perhaps the most promising of these was announced in the January issue of Nature Biotechnology. 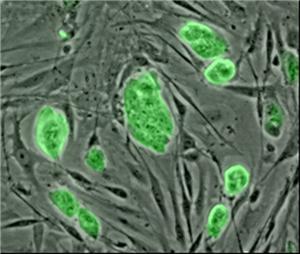 Human amniotic stem cells after extraction. They don’t look like much, but. . .Anthony Atala, director of the Institute for Regenerative Medicine at Wake Forest University School of Medicine, reported that stem cells in the amniotic fluid that fills the sac surrounding the fetus may be just as versatile as embryonic stem cells. At the same time they maintain all the advantages that have made adult stem cells such a success.

This has caused great consternation on the part of those seeking increased taxpayer embryonic stem cell funds. The reason is that there are currently no practical applications for this type of cell. There hasn’t even been a single clinical trial involving them. Researchers admit we won’t have approved embryonic stem cell treatments for at least 10 years.

One advantage of embryonic stem cells has been that most types of adult stem cells cannot be multiplied outside of the body for very long, while embryonic ones may replicate in the lab indefinitely.

But Atala’s new amniotic stem cells grow as fast outside the body as embryonic stem cells (doubling every 36 hours), and he’s now been growing the same cell line for two years, with no indication of slowing.

The amniotic sac, teeming with stem cells that can do everything embryonic stem cells can do and more. (Or less, as in causing cancer . . . )

That leaves embryonic stem cells with only one possible advantage – potential.

Embryonic stem cells can be "differentiated" into all three "germ layers," or subtypes of cell. That means they should be able to be made into all of the 220 types of cells in humans. For a long while, adult stem cells were believed to be only capable of differentiation to a limited number of mature cells, depending on the type of adult stem cell with which you start. For example, a marrow cell could become any number of types of marrow or blood cells, but it couldn’t become a muscle cell. That’s a different germ layer.

Yet it’s been virtually a state secret that for over five years researchers, beginning with a team headed by physician Catherine Verfaillie of the University of Minnesota Stem Cell Institute, have been reporting numerous types of adult stem cells (she used those from marrow) that in the lab could form mature cells from three germ layers. Experiments around the world have clearly shown that adult stem cells from one germ layer can be converted into those of another in a living human, such as those that have turned adipose tissue stem cells from the mesoderm germ layer into neuronal cells from the ectoderm germ layer. (It also produced bone; cartilage; skeletal; cardiac muscle; and blood cells among others but these are all mesodermal.) 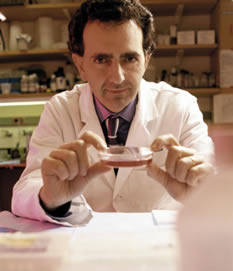 Dr. Anthony Atala is also the nation’s leading scientist in producing replacement body organs made from a patient’s own cells. People are now walking around with bladders his team created for them and he’s had success in animals with other, more complex, organs.

That said, amniotic stem cells may be the most easily differentiated of all – as well as among the easiest to extract in large amounts. Indeed, they are routinely recovered with a hypodermic needle during amniocentesis. While it’s widely believed that this procedure slightly increases the chance of miscarriage, a sizable study last November of 35,000 women who underwent mid-trimester testing found "no significant difference in loss rates between those undergoing amniocentesis and those not undergoing amniocentesis."

There are over four million births each year in the United States, yet Atala calculates that merely 100,000 amniotic stem cell specimens could supply 99 percent of the U.S. population’s needs for perfect matches for transplants. (That assumes a perfect match is even needed.) About 700,000 amniocentesis procedures are performed in the United States and Western Europe each year. Some embryonic stem cell researchers have downplayed the Atala findings. The work will "still require a lot of replication from other groups before they can be conclusive," Stephen Minger, an embryonic stem cell scientist identified only as a "lecturer in stem-cell biology" told a British newspaper. "They have only shown that these particular stem cells can turn into a couple of different types of other stem cells. I would say that a hell of a lot more work is required." Other media outlets would say the same. Newsweek International claimed, "Many scientists are quick to emphasize that comprehensive human trials are still many years away."

The New York Times refused even to allow people to read between the lines – they simply never reported the news about Atala’s work. When a reader complained to the "Public Editor," an online ombudsman, about the omission, the Times responded that its genetics reporter, Nicholas Wade, "looked at the Atala paper last week and deemed it a minor development." Wade said of the paper, "It reports finding ’multipotent’ stem cells in amniotic fluid. Multipotent means they can’t do as much as bona fide embryonic stem cells (which are called ’pluripotent’)."

Neither Minger nor Newsweek nor Wade could be more wrong. As Atala told PBS’s Online NewsHour, "We have been able to drive the cell to what we call all three germ layers, which basically means all three major classes of tissues available in the body, from which all cells come from." I pointed out in a response to the New York Times posting that merely reading the online abstract of the Atala paper indicated the same. Of course, this is the same paper that told readers in 2004 that there were no cures or treatments with adult stem cells. Not 70 cures or treatments, some dating back half a century – none.

It is neither paranoia nor exaggeration to say that the New York Times is engaged in a stem-cell cover-up.

What makes all of this worse is that Atala’s work actually is a replication of numerous studies. He’s just taken the research further and pulled his cells from amniotic fluid, whereas others have pulled the identical cells from the placenta. Amniotic and placenta stem cells are the same, as Atala himself noted. And as to human trials being "many years away," Newsweek is correct only if "years away" means "years ago." The New England Journal of Medicine carried one paper on a placenta stem cell trial back in 1996 and another paper two years later. There’s been one ongoing clinical trial since 2001 to treat sickle cell anemia.

The Washington Post’s Rick Weiss, who has been accused of boosterism for embryonic stem cell research, tried to find a middle ground, saying that "The new [sic] cells are adding credence to an emerging consensus among experts that the popular distinction between embryonic and ’adult’ stem cells – those isolated from adult bone marrow and other organs – is artificial."

Nicholas Wade kept the Atala story entirely out of the New York Times. It’s part of an ongoing effort at the Grey Lady to keep readers in the dark about the wonders of non-embryonic stem cells and the diseases they cure and treat while exaggerating any advance (or non-advance) in the embryonic variety.

Actually, what’s "artificial" is the term "adult stem cell," which worked fine not so long ago when all adult stem cells were all pulled from bone marrow, but is confusing now that they’re being extracted from placentas, amniotic fluid, and umbilical cords, which aren’t exactly "adult" sources. But for discussions both scientific and moral, stem cells can still be broken down between the embryonic and the non-embryonic.

Scientifically, all embryonic stem cells tend to become cancerous; they require permanent, dangerous, immunosuppressive drugs because the body rejects them as foreign; and they are difficult to differentiate into the needed type of mature cells. Non-embryonic stem cells, however, do not become cancerous; they are far less likely to cause rejection (especially the youngest, including umbilical cord and amniotic/placenta); and they have been used therapeutically since the late 1950s (originally for leukemia) because they have the amazing ability to form the right type of mature cell merely upon being injected into a body that needs that type of cell.

It is these biological differences that have held embryonic stem cell research back, not a lack of federal funds.

As stem-cell researcher Malcolm Alison of the University of London told a British newspaper, the amniotic cells "appear to be at least as malleable as embryonic stem cells but without all the ethical baggage."

For all the talk over the morality of using human embryos in medicine, perhaps there’s another moral issue at play: Non-embryonic stem cell researchers are already performing miracles, such as growing new heart and liver tissue and treating multiple sclerosis – all in living humans. Yet they struggle to get federal funds for their research.

Given the growing number of state initiatives that fund embryonic stem cell, but not non-embryonic stem cell, research and given that overall National Institutes of Health funding increases are unlikely anytime soon, is it truly moral to take away funds from a technology that’s been saving lives for half a century in favor of another technology that promises nothing but "promise"?