There have been a lot of well-kept secrets among the global warmists—which is primarily why the so-called "Climategate" stolen e-mails proved such a scandal. They showed that, in addition to squelching dissenters, the warmists were admitting things to each other that they were denying to the public. They felt, as a Jack Nicholson character put it, "You can’t handle the truth!"

But now the truth is coming out. One fact is that there has been no statistically significant warming for quite awhile. The other is that temperatures in the Middle Ages, at the very least in the northern hemisphere, were considerably warmer than they are now. 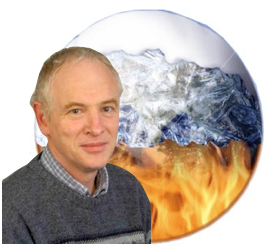 Phil Jones confesses, and it didn't even require water boarding

Conceding both these points in a BBC interview utterly without the need for water boarding or other “enhanced interrogation techniques” was Professor Phil Jones. He was director of the University of East Anglia Climatic Research Unit, where the hacked Internet server released thousands of e-mails and other documents. Jones has temporarily stepped down pending an investigation.

According to the widely accepted authority on the subject, the Intergovernmental Panel on Climate Change (IPCC), the evidence for manmade warming is "unequivocal." As Kevin Trenberth, a lead author, told Congress in 2007 when the group’s latest report appeared: "The planet is running a ’fever’ and ’it is apt to get much worse.’" (Not incidentally, that report won half the Nobel Peace Prize, with the other half going to global warming guru Al Gore.)

But in one of those hacked e-mails, Trenberth stated that "we can’t account for the lack of warming at the moment" which he deemed “a travesty." That most definitely was not meant for public consumption.

Jones, however, told the BBC there’s been no “statistically significant” warming since 1995. That’s something highly educated, highly esteemed skeptics like MIT meteorologist Richard Lindzen and former NASA senior climatologist Roy Spencer have been pointing out for awhile. "In the IPCC view, climate change is mostly under the control of humans," Spencer told me. "I believe [temperature trends] are essentially natural."

Naturally, Jones insisted the recent non-warming isn’t a trend, but rather a "blip." And while a study in Nature magazine said two years ago the “blip” may last another decade and we might even see some cooling, Jones may well be right and temperatures may resume their climb.

The importance of any current plateau is that during that same period we’ve belched so-called "greenhouse gases" (GHGs) into the atmosphere at rising rates, from 6,510 million metric tons in 1996 to 8,230 in 2006—a 26% increase in just one decade. Atmospheric concentrations have also reached the highest levels ever observed. 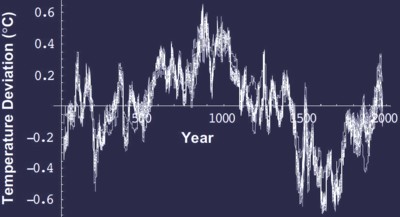 That also concerns Jones’ second major concession, which is apparently the strongest admission by a major warmist that the earth could have been warmer during medieval times—around 800-1,300. Warmists have tried to dismiss this altogether, or insisted it only applied to northern climes.

Jones admitted, however, that information from tropical regions and the Southern hemisphere didn’t contradict those in the north, merely that relatively speaking there weren’t many. But if they were found, “then obviously the late 20th century warmth would not be unprecedented.” It’s been found. A Nature study last year showed water temperatures in the Indonesia area were the same in medieval times as they are today.

Unless you’ve seen images of Viking ships with smoke stacks you know that, aside from some small herds of very small methane-belching cows, mankind was producing virtually no GHGs back then. If the medieval warming wasn’t manmade, then the recent warming may not be either.

So let’s salute Phil Jones for his honesty—even if he came by it relatively late in life.