The king is dead. More accurately, Larry King is hanging up his suspenders after 25 years on TV interviewing essentially everybody who was anybody. His secret? A studio that "felt less like a hot seat than a warm bath," as one critic put it. But by letting his guests spout off unchallenged, leaving the impression they were telling the truth, he has occasionally caused lasting damage.

So we saw just recently in San Francisco’s decision requiring retailers to prominently post cellphone radiation emission levels, tantamount to warning labels. In a 10-1 decision that the mayor has said he’ll sign into law, the board of supervisors is making the city the first U.S. jurisdiction to label cellphones in any way.

The board expressly stated its desire to get the rest of the nation to follow suit. And it all started when a guest on King’s show in 1993 announced he was suing a cellphone maker for giving his wife a fatal brain tumor. The media ran with the story, cellphone makers’ stocks plummeted, and all over America phones, however briefly, clicked off.

Yet as I wrote at the time, what he was asserting was a physical impossibility. The wife had used the phone merely three months before developing symptoms. Five years is the shortest documented time for a brain tumor to grow to a detectable size; the average is decidedly longer. She was also just one of about 20,000 Americans who develop malignant brain or spinal cord tumors each year, of whom 13,000 die.

No matter. Cellphones were now perceived as cancer threats, and ever since opportunistic antitechnology groups and grant-hungry researchers have been calling out—and more recently, texting—"b a frd."

"Every study that’s looked at brain tumors for more than 10 years all find a statistical [sic] significant risk for brain tumors," claims electronics engineer L. Lloyd Morgan, probably the most prominent cellphone activist. Yet the scientific evidence is overwhelming that cellphones are safer than a declawed hamster wearing a Hannibal Lector mask.

A study involving essentially the entire adult populations of all four Scandinavian countries, 16 million people total, appeared in the prestigious Journal of the National Cancer Institute in December, finding that a dozen years of cellphone exposure did not at all increase brain tumor incidence. It also observed that if cellphones did cause tumors that would be enough time for them to start appearing in significant numbers. The National Cancer Institute’s Dr. Robert Hoover agrees, telling me we should have "seen an increase in incidence by now." 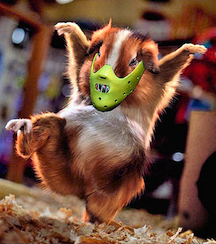 Cell phones are as safe as a declawed hamster in a Hannibal Lector mask.

Two other studies covering more than a decade of exposure data appeared in the September 2009 issue of Epidemiology, co-authored by David Savitz of New York’s Mt. Sinai Hospital, and in the International Journal of Epidemiology a year before. The first reviewed all of the studies up to that point; the second looked at phone users in five nations. Neither found any evidence of harm.

And just two months ago there appeared the mother of all studies. Conducted under the auspices of the World Health Organization, it interviewed more than 5,000 people afflicted with glioma or meningioma brain tumors, along with a control group, from 13 countries. Again, there was no increase for either type of tumor for those using the phones for any length of time.

To be fair, some studies do suggest a cancer risk associated with cellphone usage. But virtually all of them rely on phone users’ memories, and that makes them shaky. First, you’re asking people to recall their cellphone usage seven years ago when they may not remember it from seven days ago.

Second, in what’s called "recall bias," since people know the context in which they’re being surveyed, "those with brain cancer tend to over-report historical exposure," says Savitz. They’re searching for a reason they’re sick. By contrast, he notes a huge strength of the Scandinavian study is that "it doesn’t depend on recall or participation; it’s simple monitoring."

So why did the San Francisco officials ignore all this? They didn’t—they hired somebody else to ignore it for them: Notorious cellphone activists.

Larry King is finally stepping down after a quarter century of mischief.

One is University of California Berkeley psychologist Joel Moskowitz. He was lead author of a November 2009 Journal of Clinical Oncology review that began with 465 studies, then chose to review only 23 of them. All relied on cellphone user’s memories, yet they still showed no evidence of harm. So the researchers simply eliminated even more, until the majority left were by Swedish scientist Lennart Hardell, who has a long history of environmental activism. Savitz’s Epidemiology paper specifically investigated the impact of Hardell’s work on the entire field of research and concluded that Hardell’s papers are "the only consistently reported indication of risk."

Then there is Olga Naidenko, lead author of a report from the Environmental Working Group (EWG). It is typical activist fare, meaning among other things it assumes nobody will read the citations. I cheated. I read them. Thus I found that it dismisses the 2009 paper Savitz co-authored as among "earlier, short-term studies," even as it used two studies published four years before that in claiming they supported its position.

And it gets worse. It even misrepresented those. Both found, as one put it, "the data do not support the hypothesis that mobile phone use is related to an increased risk" of brain tumors. (Emphasis added.)

Thus, San Francisco pre-determined the outcome of its vote with its choice of activist "experts" who in turn had predetermined outcomes.